BLACK SNAKE MOAN and the Chains of Love 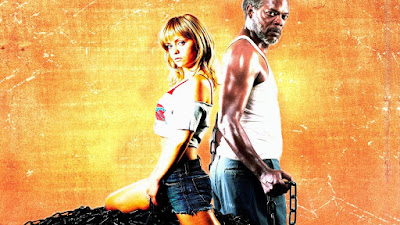 I love love stories. They are the baseline for so many movies (and TV shows, songs, books, etc.) that they are hard to get away from, and, when done well, hard not to be moved by. Yet while I enjoy watching the portrayal of love onscreen in the dramatic or romantic comedy format, there’s a part of me that can’t help but scoff at its inherent fakeness. Yes, it is a beautiful and uplifting thing to watch when two people meet in a rom-com, have their whacky misadventures, and end up happily ever after together. It also still feels like the kind of thing that only happens in movies. Not real. I need true honesty in my love stories. And believe it or not, I found that honesty in perhaps the most unlikely of movies.

Black Snake Moan is a movie that I still believe either flew under too many peoples’ radar or was maybe outright dismissed for the wrong reasons. I definitely get where the detractors are coming from. How else are you supposed to look at a movie that has an older black man chaining up a young white woman in his house to cure her of her nymphomania? But writer/director Craig Brewer (Hustle & Flow) knew what he was doing with his twisted tale and gave us one of the most raw and real examinations of love that I have ever seen.

To refresh your memory, Black Snake Moan takes place in a small town in the Deep South. Lazarus Redd (Samuel L. Jackson, in one of the best performances of his career) is an old blues musician whose wife has just left him for his brother. There is also Rae Doole (the incredibly raw Christina Ricci) and Ronnie Morgan (Justin Timberlake), a pair of lovers each with their own dark troubles whose love is tested by her rampant infidelity and his leaving to join the National Guard. One morning, Lazarus finds Rae beaten and near death on the road by his house and takes care of her. But when he learns of her reputation in town, he comes up with the wholly unconventional method of chaining her to the radiator in his house to help change her wicked ways. 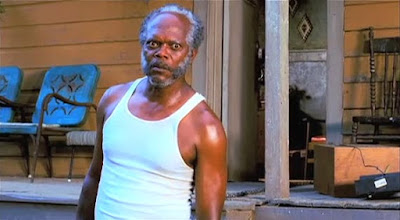 The surface level examination of the movie is that it is wildly exploitative, raunchy, and controversial. The language is foul, the violence is brutal, and the sexuality is charged as high as it can be. However, that basic premise, which admittedly is what made me want to initially watch it, is not what the movie is about at all. Those questionable plot devices that are so easy to rail against are never meant to be taken literally. There are very obvious metaphors at work here, and powerful and true ones at that. As the filmmakers themselves say, the movie is a fable. It really is a love story through and through. This is punctuated even more by the blues music that surrounds the film and plays an equally central part to the story.

Now, to be totally transparent, I’ve never been in love. I’ve never been in a relationship, even a casual one, so love outside of the familial is something that has eluded me all my life. I didn’t even feel like I could write this article because maybe I don’t really know what I’m talking about. But I think what Black Snake Moan has taught me is that this is the true reality of what I can expect should love ever happen for me. It won’t be the plastic façade of love fed to me by fairy tales. Being as far along in life as I am, I know that I will bring just as much baggage into a relationship as someone who has had boyfriends or girlfriends before. I have deep insecurities about myself. I have trust issues from past trauma. I love love, but it makes me uncomfortable. That kind of closeness and vulnerability is scary, and honestly, not something I always feel like I deserve. 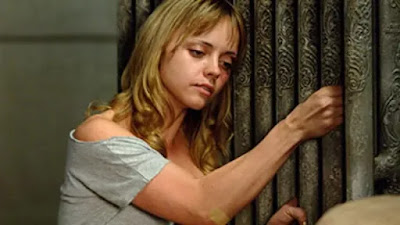 These are actually the core problems that surround the main love relationship in Black Snake Moan between Rae and Ronnie. They are already together when the movie starts – the film even opens with the two of them making passionate love. Almost right away, though, their separate, deep-seated issues are revealed. Ronnie suffers from severe and almost debilitating anxiety. Rae is a survivor of childhood sexual abuse and has “spells” that cause her to seek out sex from whoever she can to make them stop and fill the void. They love each other, but each one feels unworthy of the other’s love -- or, in Rae’s case, perhaps entirely incapable of love.

What it really seems like they are both worried about, though, is that they ultimately cannot be what the other person needs them to be. In their impromptu counseling session with R.L. the preacher, they both end up saying the same thing to each other: “You help me, but I can’t help you.” Ronnie feels a sense of weakness and failure because of his anxiety attacks, but Rae’s method of soothing him through them seems to be the only thing that works. Rae has dealt with so much abuse and familial rejection in her life that she doesn’t think she really can love anyone except Ronnie.

Rae is perhaps the most damaged of the two and must find peace with herself. This is ultimately what she gets from Lazarus. When he chains her that radiator, he is grounding her. He is quite literally forcing her to stop living the life she has been and making her confront the reasons why she does what she does to herself and other people. As she continues to grow and learn, the movie’s metaphors take even more shape. Lazarus’s chain becomes Rae’s bond to other people, something she thought she could never have. The radiator is the anchor she needs to stop her from giving in to false ideas about herself. I think the biggest truth in the movie is its final scene. Rae and Ronnie have had this breakthrough and commit themselves to each other by getting married. But it’s not going to be all sunshine and roses from now on. In the car on the ride home, Ronnie has another anxiety attack and Rae has another spell. Their problems are still there, and probably always will be. The difference now is that they have their anchors; they fully accept their own and the other person’s flaws; and despite these flaws, they finally realize that they are enough for each other. They aren’t afraid anymore and they want to be there for each other. That is absolutely true love. Rae consoles Ronnie, telling him “We’re okay,” and I truly believe that they will be. 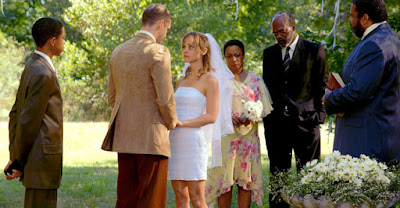 There are also two other important relationships that form in this movie: those between Rae and Lazarus, and Lazarus and Angela, an old friend from whom he seeks help for Rae. Rae and Lazarus have the non-romantic love of friendship. They are the epitome of opposites attracting and forming a close bond based on a shared experience. Their relationship is obviously antagonistic at first, what with the chain and all. But I think when she realizes that he means her no harm, she takes the opportunity he has given her to finally look inward on what she’s been doing to herself. Lazarus has just been recently hurt by his wife and brother, but his friendship with Rae teaches him that he is still capable of love and caring for another person.

What Lazarus learns from Rae spills over into his blossoming relationship with Angela. You can’t tell if they are really going to fall in love or not; what they seem to have together is the love of companionship. Angela is just the sweetest woman in the world, and almost seems too good for the embittered Lazarus. They are also two older, now single, people who maybe (like me) feel like their time has passed them by. That they won’t find love again. What they desire is true harmony with another, a person who finds those good parts inside of the other and, in turn, makes them see it for themselves. Separately, or even combined, these three relationships are love to me. Going back to my own lack of experience, this is the truth that I think I needed to hear. 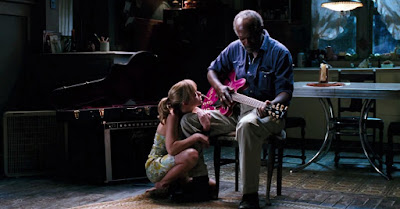 A relationship is not going to be like the movies. It’s definitely not going to be perfect, because no person is perfect. Things are always going to be hard in some way because everybody has a past that they may feel will only be a burden on someone else, or will hinder them from that deep love that we all desire. This is what should be what bonds us together, and I don’t think I’m afraid to make that bond anymore. I used to say that I’d given up on love. But I think if I can find that companion, that friend, that partner who’s also not afraid to share the bad with the good, I’ll be okay.
Posted by Patrick Bromley at 12:00 PM