Celluloid Ramblings: RETURN OF THE VAMPIRE (1943)

The fine folks at Shout/Scream Factory have done all of us Monster Kids a great service this month by releasing the 1943 Bela Lugosi vehicle The Return of the Vampire on Blu-ray disc. While certainly not a classic, this film falls into that interesting subgenre of other studios trying to jump onto the Universal Studios Monster Bandwagon by any means necessary. How weird is it to see a Lugosi vampire tale that uses World War II bomber planes as a significant plot device? 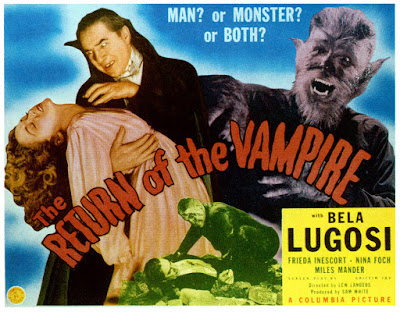 Return of the Vampire finds Columbia Pictures desperately trying to cash in on the Universal Monster craze… just as that craze was about to die again (see what I did there?) for the third time. You say Bela Lugosi has not appeared on screen as the famous Count since 1931? Sign him up! You say Universal Studios had scored a major hit in 1941 with their film The Wolf Man? Write a werewolf into this new vampire picture! You say Lew Landers had directed Lugosi in 1935’s The Raven? Sign him up too! You say Miles Mander, Billy Bevan, and Gilbert Emery had played small parts in earlier Universal Monster films? Get their agents on the phone!

The Plot in Brief: In London during World War I, vampire Armand Tesla (Bela Lugosi) victimizes patients in a medical clinic. His manservant (more of a [SPOILER ALERT] wolfservant, really) is chatty lycanthrope Andreas Obry (Matt Willis). Dr. Walter Saunders (Gilbert Emery) and Lady Jane Ainsley (Frieda Inescort) follow their instincts to the nearest cemetery, where they find the supine Tesla and stake him through the heart. Obry is released from his hirsute servitude. 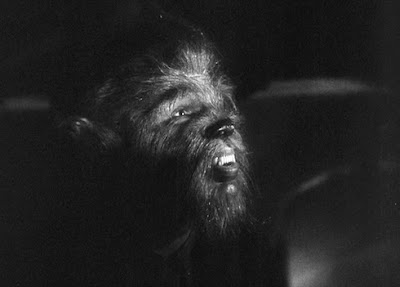 This film is short—a little over an hour long—and it never wears out its fog-shrouded welcome. This limited length is also a plus as it allows viewers to watch the film the three additional times that it takes to enjoy the three commentary tracks that Scream Factory includes on the new disc. I enjoyed all three (and have now virtually memorized the film by watching it three times in a row on a single evening) and appreciated how little material is repeated between them. My favorite was the track by Gary Don Rhodes, who has published no fewer than three authoritative books on aspects of Lugosi’s career. Rhodes’ talk is conversational and full of interesting facts (for instance, he relates that, while Lugosi was filming this movie at Columbia during the day, he was appearing onstage in the comedy hit Arsenic and Old Lace.) Rhode’s comments really capture the spirit of fun of this little 1940s programmer. 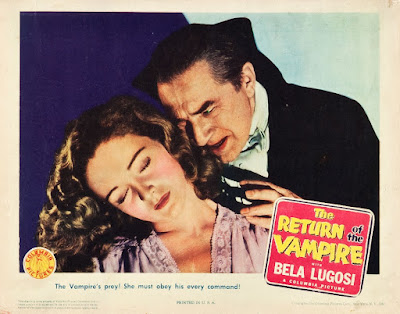 Obviously, the main attraction here is Lugosi. He was paid the princely sum of $3500 for his performance, and it’s a bit of a rebuke to anyone who has ever considered his acting style hammy. In this film, he underplays the lead. It’s a nuanced, modulated, and creepy performance. Perhaps Lugosi figured that would be a way to stand out, given that so many of his costars chew the scenery. (I’m looking at you, Mr. Willis.) Perhaps Lugosi was just exhausted because he was performing in a substantial role onstage every night.

The transfer on the new disc is immaculate. I am constantly impressed and surprised by how much detail today’s advanced AV technology can wring from these 70-year-old negatives. I doubt that The Return of the Vampire looked this good during its original theatrical run, which was quite successful. Rhodes notes on his commentary track that the film was held over for five weeks during its original LA theatrical engagement.

So what are you waiting for? Summon your werewolf personal assistant (WWPA) and send him to go buy you this disc. While he’s at it, he can stop by the dry cleaners to pick up your cape!