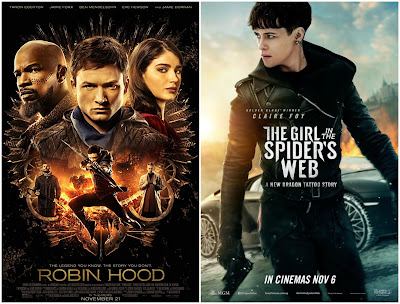 The Box is back, baby! 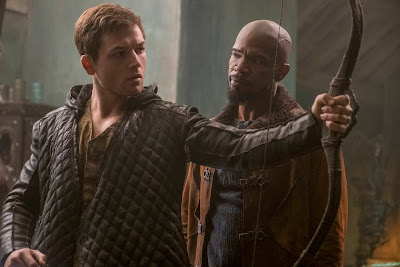 2005’s Batman Begins is the story of orphaned one-percenter Bruce Wayne’s (Christian Bale) quest to bring justice to the streets of his beloved Gotham City, to wrest control of its future from the gangsters, thieves, and corrupt politicians who have fed greedily from its citizens for generations. With the help of Wayne Enterprises’ technology guru Lucius Fox (Morgan Freeman) and master of ancient wisdom Henri Ducard (Liam Neeson), Wayne becomes the Batman, a symbol of vigilante justice fit to contend with the likes of mobster Carmine Falcone (Tom Wilkinson) and madman Dr. Jonathan Crane (Cillian Murphy). Though he spends his nights leaping across rooftops in a cape and cowl, by day he plays the part of the clueless playboy billionaire. This earns him the ire of crusading attorney and childhood friend Rachel Dawes (Katie Holmes), the love he left behind long ago. Rachel knows he can do better, that he can be better, and Bruce must decide whether or not to show her the truth.

Why the hell am I telling you this? Because that’s what you’re getting from 2018’s Robin Hood. Taron Egerton is Robin of Loxley, who returns from The Crusades to find his estate shuttered, his community oppressed by the Sheriff of Nottingham (Ben Mendelsohn), and his girl in the arms of Will (Jamie Dornan), a would-be politician who hopes to create institutional change from within. With the help of Yahya (translated to “John” and played by Jamie Foxx) and Friar Tuck (Tim Minchin), Rob becomes the Hood, a symbol of vigilante justice fit to contend with the likes of the Sheriff, his enforcer (Paul Anderson), and the corrupt Cardinal Franklin (I shit you not: F. Murray Abraham). Though he spends his nights stealing from the rich to give to the poor, by day he plays the part of the clueless Lord Loxley, earning him the ire of social activist Marian (Eve Hewson), the love he left behind long ago. Marian knows he can do better, that he can be better, and Rob must decide whether or not to show her the truth. 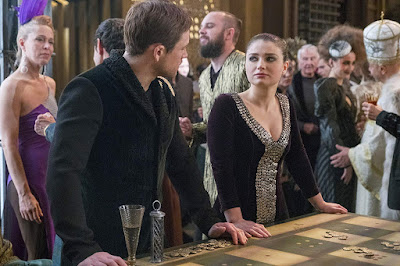 Robin Hood’s opening narration encourages us to forget what we know about the legendary character, boldly assuring us that this is no fairy tale. It makes good on that promise with desaturated, shaky-cam battle scenes out of Saving Private Ryan (in which bows-and-arrows are treated like artillery) and anachronistic clothing and style choices out of A Knight’s Tale. The Merry Men’s guerilla tactics are modernized, as well, with Will and his cohorts wearing beanies and bandanas while tossing Molotov cocktails at the Sheriff’s brutes. This is fine, if you’re into that (it does put a 21st century tinge on the radicalized Will’s overall character arc), but the sum total of these changes amounts to little more than a new coat of paint on a weak telling of a familiar story. Foxx has zero to do, Hewson is damseled and inert, Mendelsohn chews scenery in his usual way, and Egerton — who is, by all accounts, a Perfectly Fine Actor — struggles to pull Kingsman-level charisma out of an uninspiring action hero. The question you’re asking now is, “So, then why make Robin Hood (2018)?” Your guess is as good as mine. 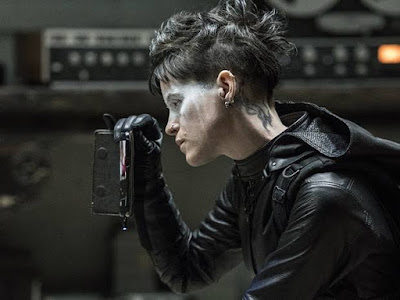 We’re five films in now, and I’m still trying to decide exactly what it is that appeals to me about the Dragon Tattoo series. I’ve never found the mysteries particularly compelling, nor have I ever felt especially connected to the characters or the drama between them. There’s always been something oppressively Scandinavian about the whole thing, a layer of uptight rigidity that keeps the audience at a distance. Still, there is a certain aesthetic appeal. I like the slick, metallic presentation. I like the stark and unforgiving nature of the violence. I like Lisbeth’s punk-industrial style. I like the thematic weight given to family, retribution, sins of the past, and the relationship between physical and emotional trauma. With that in mind, I’m a relatively easy mark for The Girl in the Spider’s Web, a requel of sorts that introduces Claire Foy as the avenging angel Lisbeth Salander. For those having chronology issues: It’s best to just ignore David Fincher’s Dragon Tattoo remake (though I count myself as a fan) and think of The Girl in the Spider’s Web as a direct sequel to the original Swedish film trilogy. Does that help? It doesn’t really matter.

The Girl in the Spider’s Web finds cybergenius Lisbeth Salander hunting for Firefall, a computer program that can remotely access the world’s nuclear arsenal. Firefall’s repentant creator, former NSA specialist Frans Balder (Stephen Merchant), has enlisted Salander to find and destroy the program before it falls into the wrong hands. Though Salander easily acquires Firefall, she immediately finds herself the target of NSA agent Edwin Needham (Lakeith Stanfield), Swedish intelligence officer Gabriella Grane (Synnøve Macody Lund), and a terrorist cell called the Spiders, headed by her estranged sister, Camilla Salander (Sylvia Hoeks). Desperate to help Balder and his son August (Christopher Convery) escape to America, save the world from nuclear annihilation, and confront the demons of her long-forgotten past, Salander again enlists the help of hacker ally Plague (Cameron Britton) and journalist Mikael Blomkvist (Sverrir Gudanson, who is apparently not The Room’s Greg Sestero). It couldn’t have been easy for Claire Foy to step into Salander’s Doc Martens — a notoriously demanding role already played by Noomi Rapace and Rooney Mara — but she acquits herself nicely, moving with the character’s staccato rhythms as if she’s been playing her for years. Foy supplements her handful of lines with subtle (but powerful) choices in posture and uses her gigantic blue eyes to betray the vulnerability hidden under Salander’s disgust and frustration. It’s a performance that, frankly, deserves more than The Girl in the Spider’s Web’s thin storyline can provide. Also making the best of it is director Fede Alvarez (Evil Dead 2013, Don’t Breathe), whose remarkable visual style gives the film a few moments of genuine beauty. They’re both working overtime to make The Girl in the Spider’s Web feel like more than an empty rehash of things we’ve seen before, and it’s a true shame that they’re ultimately unsuccessful. There simply isn’t enough for Lisbeth to do, and even her would-be familial drama is relegated to one or two scenes that — barring one frightening image — resolve themselves without much incident. Still, given a quality story, Foy and Alvarez could eventually team up for the best Dragon Tattoo of all.
Posted by Patrick Bromley at 5:00 AM