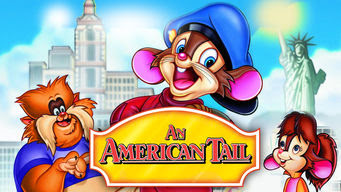 I revisited An American Tail this past weekend for maybe the first time in 25 years or more. The theatrical Fievel Mousekewitz adventures (1986’s An American Tail and 1991’s An American Tail: Fievel Goes West) were a big deal to young Adam Riske. I didn’t just own the movies on VHS (more on that in a second), but I had crazy amounts of Fievel merch as well. I owned a 22” plush Fievel doll from Sears, Fievel Goes West trading cards, illustrated books from McDonalds, and even Viewmaster reels. I was very into it. I once told my parents that our VHS copy of Fievel Goes West was defective so we could go back to Suncoast Video in the mall to get a new one. There was nothing wrong with the tape. I just wanted to have the experience bringing Fievel home one more time. Fievel Mousekewitz was one of my childhood heroes. It was because he was a little boy just like me. It was because his family was of Russian heritage just like me. Most importantly though, it was because he was Jewish just like me. That representation made me feel special. He was me, but a mouse.

I’ve been lucky throughout my life that I’ve seldomly been made to feel bad about being Jewish. What I felt more was not knowing how to handle my religion, especially at an early age. For example, the holiday season as a Jewish kid in elementary school was confusing for me. We would sing Christmas carols at assembly and make decorations out of construction paper and I felt I had to ask my teacher if it was okay for me to join in. I self-consciously “othered” myself. But Fievel was someone my non-Jewish friends knew about and liked. In hindsight, I must have figured if they liked Fievel, they probably didn’t care that I was a little bit different, too. In addition to the demographic factors, I often felt a kinship to characters like Pinocchio and Fievel. As a kid, I was constantly afraid of screwing up and these two characters were emotional and anxious just like I was. I recognized me in them and that made me feel good. 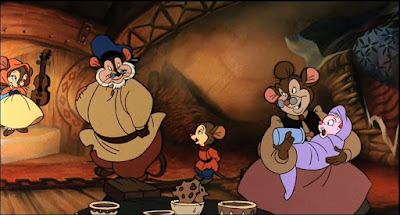 Divorced from nostalgia, I think An American Tail is a good movie with some issues. Let’s start with the good. First, Don Bluth (a former Disney animator) and his team set out to launch Amblin Entertainment’s animation division with a deliberately old-fashioned animated style, a throwback to the early animation of classic Disney. The film looks lush and beautiful. Second, the score by James Horner packs a wallop. He was never a subtle composer, but he was always good at underlining the emotional impact of the scene. Third, I really like the concept of An American Tail; setting an animated feature in the backdrop of the immigrant experience during the late 19th century is ambitious for a children’s film, especially when compared with the aim of most of today’s kids’ films. Lastly, the collaboration of Bluth as director and Steven Spielberg as producer resulted in a movie made with passion and purpose. This feels like a story both wanted to tell and prove something with – Bluth setting out on his own as an animation mogul and Spielberg (with the power to do anything creatively at that point in the mid- ‘80s) to make a Jewish movie for kids. 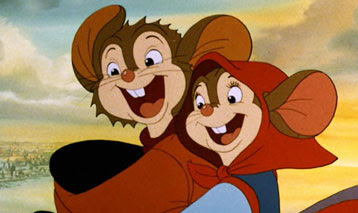 My problems with An American Tail are mostly because of filmmaking constraints due to the expense of making an animated feature at the time. There seem to be several bridge scenes missing so events happen abruptly, or continuity errors occur without any explanation (for example, in Russia the Mousekewitz’s have a baby but it’s never seen again despite boarding the ship to America). Characters exist mostly as types without much personality of their own. On more than one occasion, there’s a two-second beat and then two characters who didn’t know one another before are either best friends or in love. Many of the songs (except for “Somewhere Out There,” sung by Fievel and his sister Tanya in the film’s best scene) are memorable but not very good. I always remember the chorus to “There Are No Cats in America,” but boy did they have no idea how to get the verses organically to that chorus. The biggest problem with the movie, though, is that Don Bluth is a morbid dude and seems to almost take pleasure in separating Fievel from his family and putting all of them in danger. Sure, it chokes me up every time when Fievel and his family reunite at the end of the film. It feels earned in every way. However, there are times I want to ask Bluth (and David Kirschner, who wrote the story) why he’s deliberately putting his audience through emotional hell. Does the Mousekewitz's house need to burn down twice? Is once not enough? Why do we have to see so many close calls where Fievel is almost reunited with his family when they are RIGHT THERE? Who likes this? Imho, it would be braver for Bluth to tell a story about an immigrant family acclimating to America together. The decision to make the film about a lost kid seems easy and manipulative by comparison. 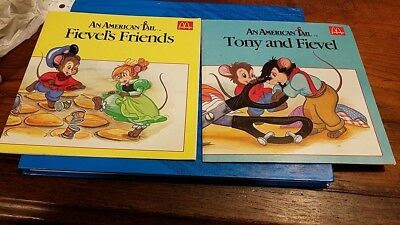 Re-watching An American Tail in 2019 was an interesting experience. There are moments in the film that are seared into my memory emotionally. I didn’t remember what happens necessarily, but I could recall with authority how certain moments made me feel. Going back to the film felt like thumbing through an old photo album and looking at pictures from when I was young. As for the sequel, Fievel Goes West is certainly the more fun of the two films, but it also sands off much of the part about the family being Jewish. All in all, neither Fievel movie is perfect, but that’s beside the point. It’s a rare example of a movie about Jewish characters not directly associated with The Holocaust. I’ll take as many of those as I can get, but that’s a column for a different day.