Is Something Wild a deep dive into the heart of the American dream, an examination of the shallowness of the yuppie lifestyle, or a cautionary tale about the lure of irresponsibility? Is it all three? Is it “none of the above?” You be the judge and jury.

Something Wild was my first taste of “Narrative Jonathan Demme,” though I had seen and loved his Talking Heads concert film Stop Making Sense two years earlier. I remember being knocked out by Something Wild when it first opened in 1986, because before that time I had never seen a movie that switched genres so completely. Many patrons in the theater that night did not like the bait-and-switch (I remember several walkouts.) 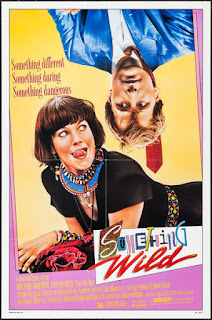 The Plot in Brief: Charlie Driggs (Jeff Daniels) is leading the dull life of a New York banker when he meets Lulu (Melanie Griffith) in a local diner. She persuades him to take the afternoon off work and follow her to a motel, where she promptly handcuffs him to the bed and calls his boss on the phone. Later, she persuades him to accompany her to her high school reunion. After some petty larceny, Charlie meets Lulu’s mother Peaches. Lulu admits that her real name is Audrey.

Audrey and Charlie arrive at the reunion and come face to face with Audrey’s ex-husband Ray (Ray Liotta, in his film debut). Something doesn’t seem quite right about Ray, but this is a bubbly romantic comedy, so what could possibly go wrong. Right? 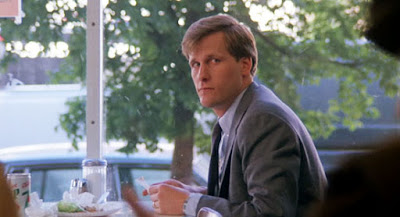 In Something Wild, Demme takes all the standard tropes of romantic comedy and stands them on their heads. What if the leading man and leading lady, who meet cute on the road to love and happiness, are both pathological liars? What if one character turns out to be a dangerous sociopath? What if the film shows the Hollywood romantic idyll to be a hollow, unattainable sham… yet still manages a hopeful ending?

Jonathan Demme’s vision of America focuses on its diversity. It is not an accident that the theme of Audrey’s 10th high school reunion is “Spirit of ’76-- Revisited.” Flags, Uncle Sam hats, and eagles crowd the outer edges of the frame as if director Demme is afraid that we won’t get that he is exploring unique, but uniquely American, characters. In no other director’s oeuvre will you find such a diverse cast of distinctly American types, and this leads to a parade of wonderful character actors. Many would become members of Demme’s stock company in future films: We have the wonderful Tracey Walter as the clerk of a liquor store that is robbed, being interviewed by the local television news and delivering one of my favorite lines in the film, “…and she was covered… her arms… both were covered in, in rings, and, and jewelry… accouterments of black, satanistic…” Robert Ridgely plays Charlie’s boss; John Sayles plays a motorcycle cop; John Waters plays a used car dealer; Charles Napier plays an irate chef. As an added bonus, the mothers of David Byrne (who contributes the film’s opening number) and Jonathan Demme play the two little old ladies who own the local thrift store! 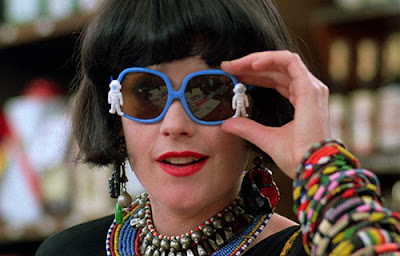 Another theme that runs through the film is the seeming emptiness of the (then new) yuppie lifestyle. Charlie seems to have it all, but as the film goes on, we learn the truth about Charlie and just how hollow and empty his life is behind his façade. Of course, the film argues that a life of chaos and random lawlessness isn’t everything that it is cracked up to be, either. So how are we to live? What Lulu/Audrey offers the bored and depressed Charlie can be summed up by the title of my favorite essay on gangster films, “The Lure of Irresponsibility” by Robin Wood. You can find that obscure essay here (you’re welcome).

The nod to gangster films here isn’t just a metaphoric flight of fancy, either. The much-vaunted genre switch three quarters though the film (which I am trying NOT to spoil) is what drove the late film critic Kevin Courier to call Something Wild a “screwball noir.” 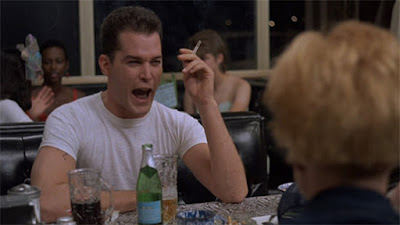 AN ANNOYING AUTOBIOGRAPHICAL PAUSE: I saw Something Wild the weekend it was released with my then-fiancé, Jan. We loved the movie, its humor, its performances, its darkness, and its music. Less than a year later, we married and spent our honeymoon in New York City. One of our most-prized souvenirs (besides the genuine, bomb-sized NYC payphone that a much more lax TSA actually let me carry onto the plane in a gym bag) was the one-sheet poster for Something Wild. In those pre-internet days, finding and buying movie posters wasn’t quite as easy as it is today. We framed the poster and hung it over our bed. Jan even bought crazy fabric with geometric shapes in bright primary colors and sewed it into bedroom curtains to match the poster. Years later, the poster hung in my classroom for decades. I just could never escape Something Wild.

As we might expect from the director of one of the best concert films ever made, the Something Wild soundtrack is killer: “Loco De Amor” by David Byrne and Celia Cruz, “Ever Fallen In Love” by Fine Young Cannibals, “Not My Slave” by Oingo Boingo, and “Wild Thing” by Sister Carol. That last song plays over the end credits as a waitress (played by Sister Carol) sings from the sidewalk, looking directly at the camera, after participating in the film’s final scene. It’s Fellini-esque! If you have a Spotify or Amazon Music or Apple Music or any Illicit, Illegal Downloading Subscription, play those four songs in that order—NOTHING WILL SOUND MORE ’80s THAN THOSE SONGS PLAYED IN THE ORDER IN WHICH THEY APPEAR IN SOMETHING WILD. 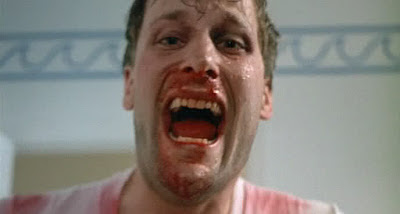 Frankly, I am a bit surprised that Something Wild did not make the list of 1986 films that we are celebrating this Saturday at F This Movie Fest. I can only ascribe this omission to rampant bias and favoritism on the part of the judges. Or perhaps—because it accurately depicts how our own Patrick Bromley met and wooed his own lady wife—maybe it just hits A LITTLE TOO CLOSE TO HOME. #RIPRealRay