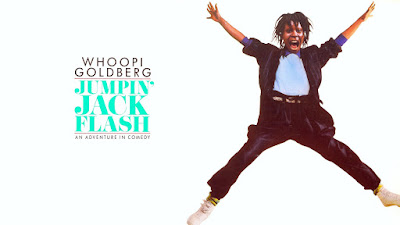 Our family movie collection when I was a kid was nothing like what I have now. We had a few of the Disney VHS clamshells and then mostly a random assortment of movies we had taped off of TV onto VHS. While we did have some really good stuff among the mix, like Raiders of the Lost Ark and Batman, for some reason we also had 1986’s Jumpin' Jack Flash, a comedy spy action movie that was probably not that appropriate for children. Still, it was a family favorite and in constant rotation as I was growing up and falling in love with movies. Over thirty years later, it hasn’t lost any of the charm that made it a classic in my eyes.

Whoopi Goldberg stars in the movie as Terry Doolittle, a bank employee who enjoys chatting with her international clients on her computer. One day she gets a mysterious message from a man who calls himself “Jumping Jack Flash.” Intrigued, she gets more involved with him and soon finds out that he is actually a British Intelligence agent trapped in Eastern Europe and on the run from the KGB. Despite the dangers, and the fact that people are now coming after Terry herself, she remains determined to help her new friend and get him back home safely.

I hadn’t seen Jumpin' Jack Flash in years, yet always had the itch to rewatch it. Late last year, I finally bought the DVD from eBay and was reunited with it just a month before the passing of Penny Marshall. This was Marshall’s feature directorial debut, having previously directed a few episodes of Laverne and Shirley. It didn’t click with me at the time that I was first watching the film that this was a Marshall vehicle, but now it totally feels like her movie. In truth, she ended up saving the movie. Before she came onboard, not even knowing the script, the film had a very troubled production where everyone had been fired. Marshall jumped in anyway, making the wise decision to bring in her roster of comedy veterans to round out the supporting cast and improvise the script, and just do her thing with it. The rest is history. 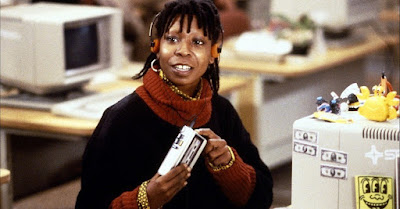 Jumpin' Jack Flash was also the first starring role for Whoopi Goldberg and equally serves as a great vehicle for her talent as well. Goldberg’s charisma and star power make Terry an immensely likable character with all the right quirks and a truly affable nature. Marshall does a great job at introducing us to her character right from the beginning with shots of her apartment over the opening credits. Her walls are adorned with old movie posters, and both her living space and desk at work are filled with kitschy knick-knacks that match her sense of humor. We even find out later that Terry has a giant toothbrush as part of her décor, because why wouldn’t she? Terry is the kind of person that everybody loves, that person who knows everyone’s name and what’s going on in their lives, and really cares about other people.

This trait really makes you believe the lengths that Terry goes to in order to save a person she’s never even met. Terry forms a very sweet, close bond with Jack that is not unlike the online relationships we make today. Many of us probably have more close friends on Twitter or Instagram than we do in our online lives. While there may be a bit of posturing by some, those who are truly genuine are easy to spot, and it becomes easier sometimes to talk to them rather than somebody in real life. It is established that despite Terry’s effervescence, she’s mostly a loner and does sort of long for a real connection with someone. It doesn’t even seem weird at all that she makes this connection with Jack even though the two couldn’t be more different. Somehow, the two of them just click. There is also a great choice made by the filmmakers here to enhance the pair’s online connection by having his side of the conversation read in Jack’s actual voice, after Terry hears it on the answering machine in his apartment. We feel like we know him more after that, and it makes for a truly great moment when Terry and Jack finally meet at the end of the movie. 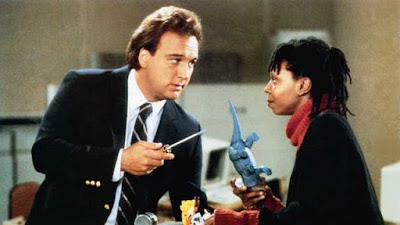 Terry is also a great female character to highlight, because not only is she incredibly charming, she also has a fiery, take-no-shit side to her that I love. Even with the kind of people she comes into contact with throughout the movie – either bad guys or high-ranking people in British society – she is never intimidated by any of them or tries to hide her personality. Her gender, and therefore her ability to be effective, only comes into question once with Jack, which she immediately shuts down. Later, he makes a comment about how we should “leave this game to the women.” Right on. One of my favorite moments is her line to Garry Marshall at the police station when he’s being a jerk and she just says to him, “You know, you can talk directly to me, asshole.” This isn’t the first or the last movie to feature an ordinary person in an extraordinary situation, but Goldberg’s Terry Doolittle is still one of the best for me, as she has more than enough character moments and quotable lines to make her memorable.

Speaking of extraordinary situations, if you’re looking for a spy movie with exciting car chases and shootouts, look somewhere else. There is a little bit of that here and there, but the majority of the “action” gears more toward situational comedy, and there is plenty to enjoy. From Terry crashing a party for the Queen at the British consulate and getting her dress stuck in a paper shredder, to her getting dragged through the streets of New York in a phone booth, all the way to her getting overdosed on truth serum and rampaging through Elizabeth Arden, there is never a dull moment. Again, Goldberg’s acting shines in these scenes and she sells every second of it. The music choices, and Marshall’s directing and ability to both build up the scenes and let them play out the way they need to, also enhance these outlandish scenarios and will no doubt have you chuckling. There are also some great moments involving junk-biting and mannequin parts to look forward to. While I don’t think the movie would be as successful without Goldberg leading the way, the supporting players are just as important and only add more to the movie’s charm. There is an incredible cast of fantastic comedic actors of the time, including Carol Kane, Jon Lovitz, Jim Belushi, Annie Potts, Phil Hartmann, and Tracey Ullman. Heck, I’ll even give credit to the Russian aerobics lady who appears on Terry’s monitor at work. Portraying either Terry’s colleagues or the bad guys that are out to stop her, all these personalities are a more than welcome addition to the story who each sell their own brand of comedy. With this kind of cast, I can only imagine the kind of outtakes this movie has and I would pay good money to see them. 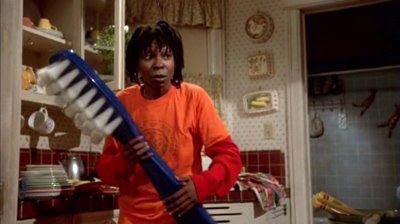 Jumpin' Jack Flash was not at all loved by critics upon its release, but I don’t think nostalgia has entirely clouded my judgement on this one. Saved from a production that was heading downhill, it had two powerful and trailblazing women at the helm to turn it around and make it their own, and I’d say that they were both wildly successful at that. The technology and other such things are obviously dated, but the comedy still works and the heart of the story is still resonant today. If you’ve never seen this movie or haven’t seen it in years, I can’t give it anything other than my highest recommendation. Jumpin' Jack Flash truly is a gas, gas, gas.

Posted by Patrick Bromley at 8:30 AM