THE MOSQUITO COAST: This is America 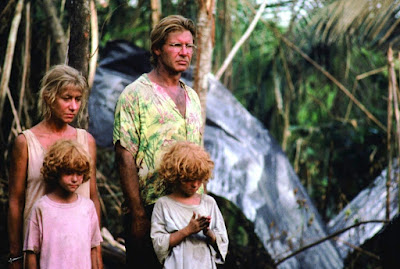 “Look around you—how did America get this way?”

I’d like to begin with a rambling preamble (a “rampamble”):

Seriously, folks: this trip to the library may change my DVD game FOREVER. You want variety? Here is a random “M” shelf: 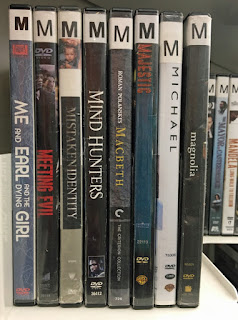 …oh, and just for good measure, check this out: 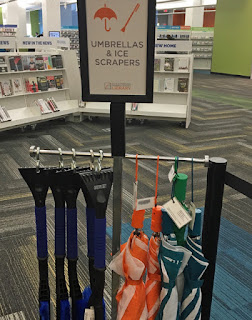 My library will let you check out an umbrella or an ice scraper and keep it for a WEEK. This is just long enough to take stock of your life. Because maybe you need to sit down and ask yourself why you live in Illinois but don’t already own these things. BE A FUCKING ADULT.

I was attracted to the idea of writing about this movie for 1986 Week because it seems like a film that more people should still be talking about when they talk about mid-1980s films. It stars Harrison Ford at his most Movie Star-riest—he already had three Star Wars films and two Indiana Jones films under his belt, and the year before he’d scored Best Actor nominations from both the Academy and the Golden Globes for Witness (which, like The Mosquito Coast, was directed by Peter Weir.) It also features River Phoenix, who would soon become one of the decade’s most popular young performers. (Though maybe Phoenix’s appearance in The Mosquito Coast has been overshadowed by his amazing performance as Chris Chambers in Stand By Me, which was released the same day.)

But mostly, in my memory, there was something so quintessentially 1986 about The Mosquito Coast’s perspective on the American Experience—particularly what I remembered of its sad, helpless cynicism and rejection of the “Yuppie” ideal. I wondered if those ideas about Americanism would hold up—and how they might compare to where we are today. 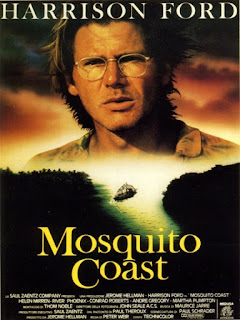 THE PLOT IN BRIEF: Ford plays Allie Fox, a genius inventor fed up with what he sees as the erosion of American society. When he invents a miraculous machine that makes ice, he decides to move with his wife (Helen Mirren) and four children—including his eldest son Charlie (River Phoenix), who clearly idolizes Allie—into the South American jungle to start a new society. Things don’t go well.

Allie is, for better or worse, the soul of the movie. I say “for better or worse” because Allie Fox is deeply flawed, and your tolerance for his particular flaws will directly influence your experience of The Mosquito Coast. Allie is brilliant, but driven by the narcissism that often accompanies brilliance; charismatic, but easily stung; confident, hardworking, and imminently capable—but too quick to judge others by the same crazy-high standards to which he holds himself. He lies, sometimes cruelly, if it serves his purpose; though it’s easy to see that HE believes that his purpose is noble and good. He’s a sun that both warms and scorches, and whose immense gravitational pull draws everyone into his orbit.

The Mosquito Coast is based on a novel by Paul Theroux, and the movie’s episodic narrative and the way characters and themes weave in and out are likely due to its source. Yet the source novel shows through most clearly because it is Charlie’s POV that narrates our experience, and his changing relationship to Allie forms the film’s secondary narrative. If Allie was telling the story (as it is, he never stops talking) we’d reject him as an unreliable narrator; he’s far too egotistical and smug, speaking always from the privilege of his intellect and caring about others only as they can support his goals. Giving the point of view to Charlie helps us appreciate Allie at his best (as Charlie does) and gives depth and resonance to Allie’s gradual descent into paranoia and delusion. 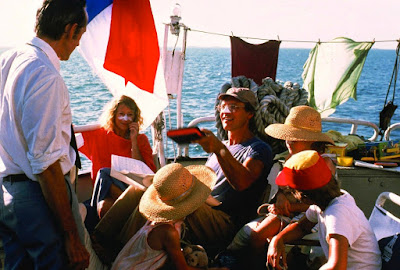 I think Ford gives a terrific and nuanced performance. I particularly like the way he lets Allie unravel slowly; there’s no one single moment where he “snaps.” From the moment we first meet him, we can tell something’s a bit off… but we can also tell that his family, accustomed to reaping the benefits of his brilliance and shrugging off his foibles, don’t see it yet. As Allie grows more dangerous, we wonder whether his family will catch on soon enough to avoid disaster, and this amps up the tension.

There are plenty of other great performances, too: the character of Charlie is so understated he’s almost blank, but Phoenix’s emotional depth helps us see that it’s his relationship with Allie that’s really holding Charlie back. In contrast, Martha Plimpton is wholly engaging as a preacher’s daughter brimming with personality. And Helen Mirren is given very little to do as Mrs. Fox (another person so eclipsed by Allie that she’s almost erased—because Allie calls her “Mother,” we never even learn her first name) but she makes every moment she does have shine. 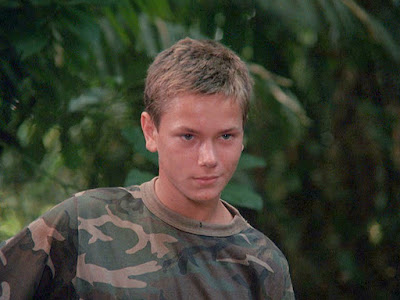 The Mosquito Coast addresses some philosophical themes that will likely never go out of style: it’s a coming-of-age film, a man-versus-nature film, and a science-versus-religion film in which Allie himself is both the scientist and the religion. It’s a study in the hubris of playing God (Allie even calls the giant ice machine he builds in the jungle “The Monster” and compares himself to Dr. Frankenstein) and a story of one man’s journey into darkness and what that darkness compels him to do. (I wasn’t surprised to learn that the screenplay was written by Paul Schrader, who also wrote Taxi Driver.)

Still, I think the most striking thing about re-watching The Mosquito Coast for the first time in 33 years is how its commentary on America seems as relevant today as it did back in 1986. “Look around you—how did America get this way?” Allie asks Charlie in the opening scene, echoing the sentiment that most Americans of both political parties seem to ask themselves every damn day in 2019. Allie has contempt for a 1986 culture he sees as shallow and over-commercialized; how would he respond to our current social media landscape of influencers, followers, and “likes”? 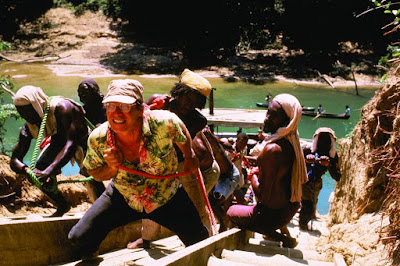 Allie’s greatest downfall is his refusal to strike a balance—he touts freedom but demands obedience; he prizes unspoiled nature but his monster machine rises from the jungle like the monolith from 2001. He won’t tolerate compromise, and he won’t listen to anyone who doesn’t agree with him. In the end, it costs him everything. That may have felt timely to folks in 1986, but watching in today’s polarized America seems remarkably prescient.