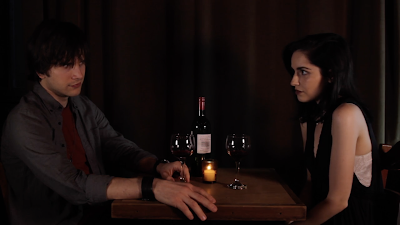 "The Shadow Scarf," essentially a two-character chamber drama starring Clay Von Carlowitz alongside his real-life wife Asta Paredes, is a short film very much of this cultural moment. It's a story about personal responsibility -- about the need for people, particularly men, to do more than bear witness at the ugliness around us all the time. It's spare and haunting, dreamy in the way it examines the sins of yesterday being revisited upon us in the present.

Full disclosure: I first met Von Carlowitz and Paredes back in 2013 when I was covering Return to Nuke 'Em High Vol. 1, in which they both starred. We have remained in contact ever since and I consider them friends. But I also consider myself a fan, and have always admired their commitment to creating art any way they can, whether it's roles in indie genre movies like Sociopathia and My Bloody Banjo or Kickstarting their own stage production of Danny and the Deep Blue Sea, which they produced and starred in together. I love the way they support one another and find ways to work together, just as they do in "The Shadow Scarf." They're real artists making a go of it for all the right reasons, and that endears them to me greatly. That they're a great couple and so in love only endears them to me more. 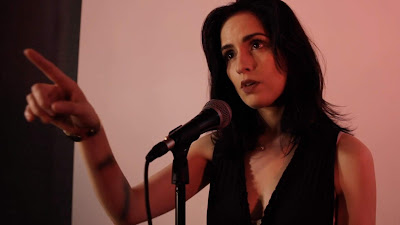 I come to "The Shadow Scarf" not as a friend to Clay and Asta, but as a fan who has followed their work for the last five years and wants to see what they do when they're calling the shots and in complete creative control. Von Carlowitz not only stars, but also wrote, directed, and edited the short, plus produced it alongside Paredes. Like so many shorts and independent films, this is a labor of love.

The story is this: it's a cold and foggy night in New York City. Jeffrey (Von Carlowitz) is closing up  the bar where he works. Into the bar enters Aurora (Paredes), who asks for just one drink. She and Jeffrey get to talking. He likes her. She performs a song, and his "like" goes to "entranced." Then they talk some more, and it gradually becomes clear that Aurora may not be exactly who she is pretending to be. Neither is Jeffrey, for that matter.

At roughly 20 minutes, "The Shadow Scarf" takes its time revealing information. Von Carlowitz wants to put us in a trance before he drops the hammer, which, to be fair, never exactly drops -- it's more gradually lowered until the dark implications of the final line of dialogue knocks us over. Giving time over to an entire musical performance inside of the short film format may seem indulgent or less than economical, but the sequence is so haunting and lovely that it becomes necessary. This is Aurora casting her spell, and what follows works all the better because we, like Jeffrey, are hypnotized. 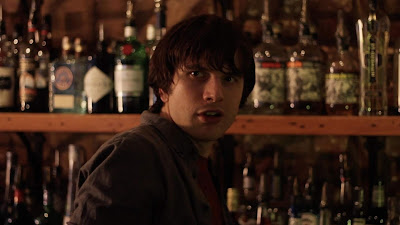 Everything about "The Shadow Scarf" is hypnotic, from the use of fog that rolls in and out to bookend the story (reminiscent of David Lynch in the best way) to the guitar and synth score by Grant Swift Glidden. The dialogue and delivery are stylized in such a way as to walk the line between reality and dreams. The characters do a great deal of talking, but rarely do they say what needs to be said -- namely, the truth. This is a story about what we conceal about the past, and how those secrets, like a fog, allow us to lie to ourselves and avoid facing who we really are. There has to be accountability even in silence, the film suggests, and that standing by during acts of cruelty still makes us party to cruelty. We don't get to tell ourselves we're the good guy just because someone else is worse. 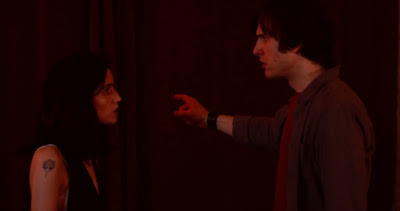 So many short films -- especially those that exist in the genre space -- are based in some kind of high concept, executing a premise the way an episode of The Twilight Zone would but in less time. "The Shadow Scarf" isn't really like that, concerning itself more with mood, with character, and with performance. Von Carlowitz isn't out to tell some snappy little story or grab us with a twist ending. This one uncurls, somewhat inevitably, like a fog that reveals as much as it obscures. It begins as a dream and ends as a nightmare.
Posted by Patrick Bromley at 5:00 AM