This column is written in “Back and Forth-O,” a new process whereby the left-to-right motion of your eyeballs as you read the text WILL SUMMON GHOSTS TO YOUR EXACT LOCATION! See! Look behind you! AAUUUUUUGH! SCREEEEEEEEEE!

I am one of the biggest William Castle fans (by weight, if not by enthusiasm) so I am still trying to figure out how I missed the original release of this baby last October. It would have made perfect viewing for Scary Movie Month. The fine folks at Indicator Releasing/Powerhouse Films have done themselves proud with this Region Free Blu-ray box set. 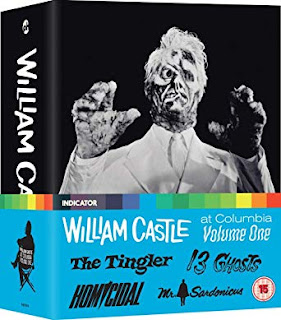 I still remember my introduction to William Castle. In college, I subscribed to American Film magazine. Trash auteur John Waters published his groundbreaking essay on William Castle, “Whatever Happened to Showmanship?” in the December 1983 issue. At first, I thought the whole thing was a put-on. Did a film director actually insure his entire audience with Lloyd’s of London in case they died of fright during one of his films? Did that same director actually arrange to have random theater seats rigged with electricity to shock audiences’ butt cheeks during screenings of The Tingler? Surely, this was a far-fetched flight of fiction on the part of the irascible Mr. Waters. 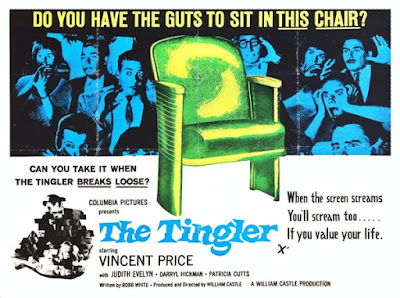 Many of you are familiar with Joe Dante’s masterpiece Matinee, the story of an out-of-control filmmaker previewing his latest gimmicky B-movie horror film in Key West during the Cuban Missile Crisis. The John Goodman character, Lawrence Woolsey, is loosely based on William Castle.

The new Powerhouse box is absolutely terrific in every imaginable way but one, and we will get to my small quibble in due time. The set includes The Tingler from 1959, 13 Ghosts from 1960, and Homicidal and Mr. Sardonicus, both from 1961. The transfers are the best these films have ever looked on any home video format. In fact, one scene in The Tingler that incorporates color in the otherwise black-and-white film (an effect that always looked dodgy in past tape and disc releases) has been “fixed” by Powerhouse. They went back to the original materials and did a new 4K scan, eliminating the problems of those earlier releases that tipped off how the gruesome effect was achieved. Bravo, Powerhouse!

Needless to say, what the all four films lack in sparkling dialogue or directorial prowess is more than made up for by their sheer sense of fun. These films spell fun with a capital “F!” About a year ago, friend-of-the-sight Michael Piccoli and I attended a Fathom Events screening of The Tingler in an honest-to-God movie theater. No one in that audience was bothered that the film’s plot makes no sense or that the film’s titular creature resembles a rubber lobster being pulled along on a visible wire. At the film’s climax, the screen goes dark and the voice of Vincent Price implored us to “Scream— scream for your lives!” Let me tell you, we all screamed... and loudly too. I would rank that screening in the “Top Five Most Fun Movie Moments in My Life.” Thanks, William Castle.

These films never wear out their welcomes either. I’m sure that Castle, the consummate showman, realized that shorter running times meant more screenings per day in every theater. No film in the set (indeed no film he ever directed!) runs longer than 95 minutes. Good Lord, 13 Ghosts clocks in at a mere hour, fifteen. William Castle respected us all enough not to waste our time. 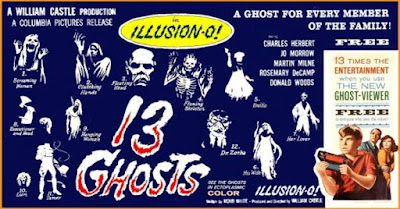 The booklet essays are wonderfully curated. The extras are plentiful, incorporating both the extras on the original American DVD set and extras that are exclusive to this new release. The set also includes the delightful Jeffrey Schwarz documentary Spine Tingler: The Films of William Castle as a special feature. (I was lucky enough to catch a theatrical screening of the documentary when it was first released in 2009.) The set also contains audio commentaries and personal reminiscences by people who worked with Castle. It’s an impressive, impressive set and worth every penny.

The bonus features go into an insane amount of detail concerning the various gimmicks Castle conceived to promote the films. The Tingler featured “Percepto,” which was his term for the previously mentioned buzzing seats; 13 Ghosts employed “Illusion-O,” which involved distributing “ghost viewers” to all patrons; Homicidal featured a “fright break” during which audience members who were too scared could get a refund if they left the theater; and Mr. Sardonicus had “The Punishment Poll,” where glow-in-the-dark cards gave audience members the idea that they were deciding the ending of the film. Castle deserves credit for having the imagination to dream up all these gimmicks (and more—the boxset does not contain The House on Haunted Hill, which used “Emergo” and is actually my favorite out of all of Castle’s films.) 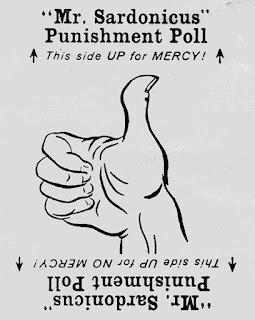 It is only in the presentation of 13 Ghosts that I find the Powerhouse set lacking. While the company bends over backwards to satisfy an audience hungry for the “Illusion-O” gimmick (four versions of the film are presented) it would have been easier and much more fun if they had simply included a ghost viewer as part of the package! The original DVD release did—that’s where I got mine—and that release even included a mail-away offer if you wished to purchase more of them. How I wish I could travel back in time and order ONE HUNDRED EXTRA GHOST VIEWERS… and kill Hitler. 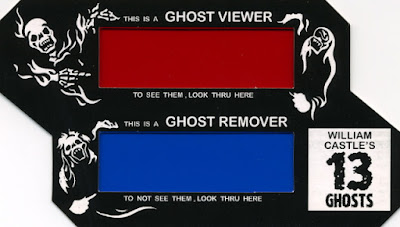 AN ANNOYING AUTOBIOGRAPHICAL PAUSE: The school district where I taught for some 30 odd years used to host an annual “Visual Arts Day,” an all-day event for the district’s art students. Some of my most pleasant memories of teaching revolve around the various workshops and presentations I led for Visual Arts Day through the years, representing the history of film. One year I put together a presentation that attempted to explain and demonstrate “The Gimmick Films of William Castle.” I demanded that students sign a bogus insurance policy when entering the classroom, in case anyone died from fright during my presentation. During the “Emergo” scene in The House on Haunted Hill, I walked through the auditorium wielding a glow-in-the-dark skeleton on a long pole. I handed out ghost viewers (which I MADE MYSELF, such was my devotion to higher learning) so that students could get a taste of “Illusion-O” while screening 13 Ghosts. We re-enacted a “Fright Break” and the “Punishment Poll.” (NOTE: I did NOT wire the seats for The Tingler.)

Those were good times. 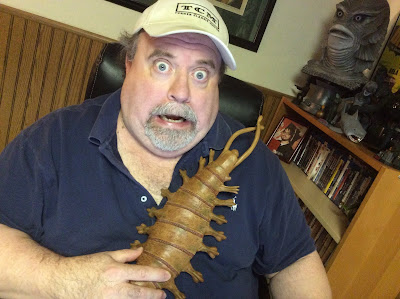 I heartily recommend this boxset and am looking forward to Powerhouse’s follow-up release, William Castle at Columbia, Volume II; I am confidant that their loving transfers and surplus of special features will make up for the fact that the four movies themselves aren’t nearly as good as the four assembled in the first volume.

While writing this, I learned that Castle’s autobiography Step Right Up: I’m Going to Scare the Pants Off America! is back in print. It is available in both paperback and digital for e-readers. It’s a must-read!