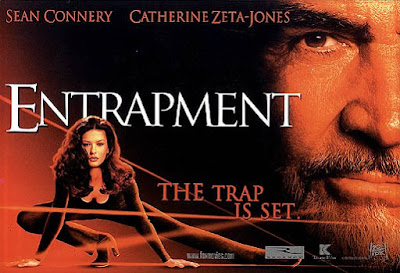 Celebrate the Millennium with lasers, hacking into mainframes, and masked balls.

Entrapment is a relic of April 1999. It comes from 20th Century Fox but feels extremely Paramount. In the ‘90s, the studios really cracked “hardcover cinema for dads” with the Jack Ryan franchise, The Saint, Mission: Impossible, Air Force One, etc., and Entrapment falls nicely in line with that grouping. It’s the type of movie bored white men fantasize about while reading Sky Mall. It’s a rich man’s fantasy with all the trimmings: castles solely used for heist training, impromptu trips to Kuala Lumpur, fine art, formal wear, and beautiful women more than half your age who are so attracted to you that they can barely do their jobs. It’s also the type of movie I miss that the ‘90s were so great at churning out: programmers entirely reliant on the appeal of their movie stars. No one went to see Entrapment for what it was about. Sean Connery being Sean Connery and a luminous Catherine Zeta-Jones in her first lead (after years of solid supporting work) were the draws. I miss those days. 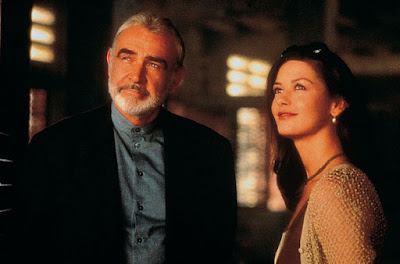 A selling point for Entrapment was the romance between then 69-year-old Sean Connery and 30-year-old Catherine Zeta-Jones. It screams of male vanity, but I must say it also kind of works. Sexy isn’t the right word, but I never doubted that these two had chemistry with one another in the same way Cary Grant and Audrey Hepburn did in Charade. By 1999, Connery could play the part of suave master thief in his sleep, but he doesn’t phone in his performance in Entrapment. He’s very aware of how the audience perceives him and he gives them what they want while still seeming to have fun doing it. Catherine Zeta-Jones’s performance is interesting because this was the first movie to use her elegance in service of a part that drives a plot. In Entrapment, she’s given room to breathe within the character. She’s vulnerable, impulsive, and not the seasoned professional thief that Connery’s character developed to be over the years. The two make for an appealing duo. Are they as good as Pierce Brosnan and Rene Russo in the remake of The Thomas Crown Affair, also released in 1999? Not quite, but this is about as good as it gets when you build around a couple with a nearly forty-year age difference. 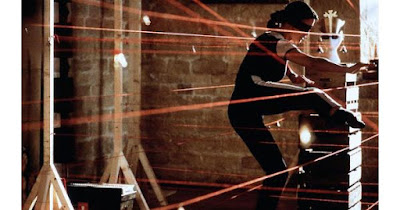 This was my first time seeing Entrapment since the theaters back in ‘99. What struck me was the film having two distinct halves. The first half (which is the lesser of the two in my opinion) is about a heist of a $40M Chinese mask. It’s all a MacGuffin so that we can see extended sequences of Zeta-Jones practicing laser avoidance using webs of red yarn while Connery watches intently in the shadows and Christopher Young’s romantic score unfolds. It’s very basic and bored me a bit because the characters felt too much like archetypes and not enough like people. He’s the legend and everything he does is wonderful and she’s the dogged insurance investigator using all her feminine wiles to get her man. We’ve seen this a million times before. In the second half (when the focus goes to a wire transfer heist on New Year’s Eve), things get more interesting because the power dynamic flips. Zeta-Jones becomes the mastermind and Connery her partner. This is also the half of the movie where the characters display weaknesses and human foibles. I especially liked how Connery knows Zeta-Jones is overzealous because of success from the previous score and is doing what he can to protect her behind-the-scenes from taking a fall. For the Zeta-Jones character, she goes from a loner focused on her work to someone that cares more about having an honest partnership with someone she respects than just a career goal. It all culminates in a very silly double climax (one where the pair are swinging hundreds of feet in the air to avoid capture and an elaborate train platform fake-out that goes on too long), but the film has earned the right to cut loose by then because you’re invested enough in the characters. 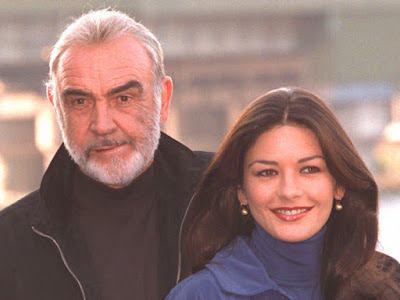 Twenty years later, Entrapment functions mostly as it did in 1999. It’s a cinematic appetizer more than a meal, but one you continue to snack on because it tastes good enough and it’s sitting right there. The leads are compelling, the supporting cast (including Will Patton and Ving Rhames) are reliable, there’s a dope Seal song over the end credits, and you get to jet set around the world for a couple of hours from London to Scotland to Malaysia. Among Blockbuster Video “Guaranteed in Stock” titles, you can certainly do worse than Entrapment. If anything, I appreciate the film more now than I did during its initial release because it was the third to last on-screen appearance by Sean Connery, who would retire in 2003 after The League of Extraordinary Gentlemen. I took for granted that he wasn’t going to be around forever. I guess we should be thankful he retired in style instead of co-starring in the remake of Going in Style.