2019 CCFF Review: THE ART OF SELF-DEFENSE 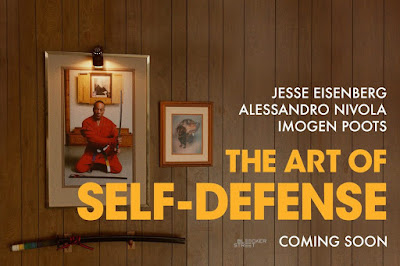 Fear does not exist in this dojo.

Writer/director Riley Stearns' The Art of Self-Defense, which played at SXSW a few months back and screened at the Chicago Critics Film Festival just this week, is like Fight Club by way of Jody Hill. It's a dark, dark comedy about masculinity, power, and ego told with a healthy dose of deadpan absurdism, neither as good nor as demented as Observe & Report but definitely belonging in the same conversation. 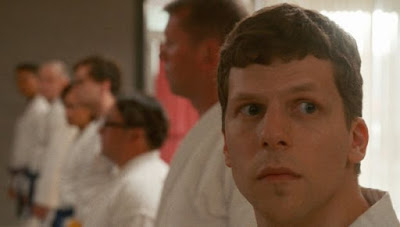 Jesse Eisenberg plays Casey, a quiet, bookish accountant whose best (and only) friend is his dachshund. On his way home from picking up dog food one night, Casey is attacked and brutally beaten by a gang of motorcyclists. Hurt and afraid, he looks into buying a gun -- that is, until he walks past a karate class and begins taking lessons from Sensei (Alessandro Nivola), whose dojo has its own rules for karate. Before long, Casey is wearing his yellow belt everywhere he goes and joining the school's night classes, where the stakes are really raised.

There's a really interesting tonal thing going on in The Art of Self-Defense that's hard to pinpoint. Writer/director Stearns (who made the excellent drama Faults in 2014) sets the movie in something that approximates our reality but isn't quite, then plays everything straight enough that when it crosses over into its more cartoonish aspects we don't quite notice the leap. The performances, like the material, are heightened but not broad, meaning even the most absurd moments are delivered with straight-faced dispassion. It's a fine line the film walks, one that becomes even more delicate as things turn really dark in the second half, but it's a balance that works. 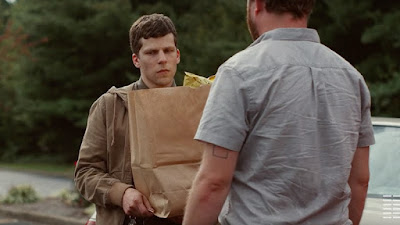 Jesse Eisenberg can play this kind of role in his sleep by now; his Casey is basically Mark Zuckerberg from The Social Network if he took assertiveness training and began to fancy himself something of a tough guy. He's good but predictable, as is Imogen Poots playing the only female at the karate school, who unfortunately has to work twice as hard as every man just to be taken seriously and still can't get made a black belt. The real performance of the movie comes from Alessandro Nivola, an actor who has been working for more than 20 years (he's Pollux Troy, for fuck's sake) and never had a role this good. At any given moment, Sensei can be a fraud, a psychotic, or an idiot, and Nivola seems really enjoy playing both scary and stupid. He's toxic masculinity personified, full of bad ideas and bad advice, all delivered with total sincerity. He's hilarious. 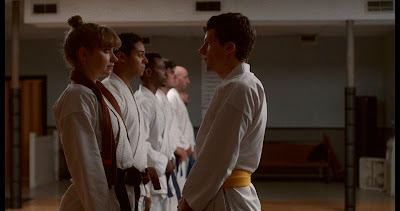 It would be very easy for The Art of Self-Defense to fall into a trap of self satisfaction. At times it comes close, and I'm sure there are some viewers who will feel it's more than just at times or that the movie's tone is too off balance. I won't argue with them. This is a movie made for a very specific sensibility; it just happens to be a sensibility that I share. It's funny and it's pitch black and it has something on its mind, and I can't ask for much more than that from a comedy. I like that it's uncompromising. Those who don't can always tap out.
Posted by Patrick Bromley at 3:00 PM