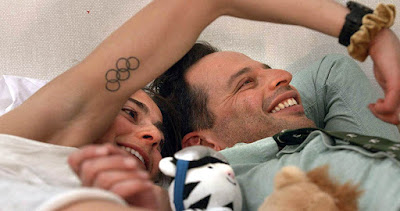 A romantic comedy shot at the actual Olympic Games.

The hook of Olympic Dreams is a good one: director Jeremy Teicher and co-writer/star Alexi Pappas shot a movie during the 2018 Winter Olympic games in Pyeongchang, South Korea, enlisting Nick Kroll for a run-and-gun romcom that plays like a sort of May/December Before Sunrise set against the Olympic village instead of Vienna. Better yet, call it Lost in Translation with more sports.

Real-life Olympian Pappas (a competitor in long-distance running) plays Penelope, a 22-year old cross-country skier making her first Olympic appearance. With no family, friends, or teammates there for support, she's growing increasingly lonely. Enter Ezra, a volunteer dentist reporting for duty after a recent heartbreak. The two bond over their shared sense of displacement, developing a friendship -- and maybe something more -- over the course of a few days together. 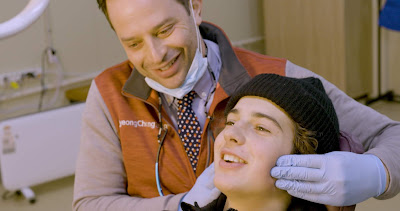 Even if the performances and the screenplay for Olympic Dreams -- much of which feels improvised or found in the moment by the actors and the director (who also operated the camera and recorded the sound to keep the crew as small as possible) -- weren't incredibly charming, the movie would hold appeal for the novelty of its location. I love the way it drops us into Olympic Village and shows us everything from the food service area to the medical tents to the game room to the stadium; it's unprecedented access granted through an actual narrative. A number of Olympians appear in small supporting roles either as themselves or as close approximations thereof, which only lends greater verisimilitude to the proceedings. It's a neat mix, combining a documentarian's approach to a loose, organic comedy that feels like something Joe Swanberg would make. 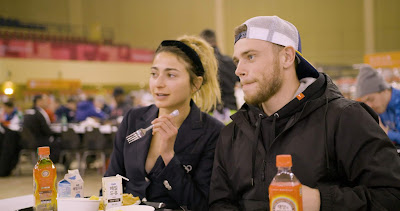 Pappas, who previously wrote, starred in, and co-directed Track Town alongside Teicher, makes for a likable lead, with an offbeat naturalism that allows her to come at every line delivery from an unexpected angle. Her real life experience as an athlete also gives Penelope a point of view not often seen in sports movies, one that comes from equal parts passion and uncertainty. It's one of many aspects of the film that just feels real. Nick Kroll is equally welcome as the semi-romantic lead, allowing for more dramatic moments and not always feeling the need to push the comedy front and center. It's a good change of pace for him. He and Pappas have a fun, awkward chemistry together, and their affection for one another feels earned on screen. 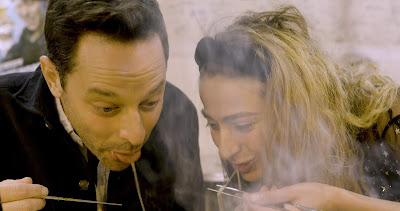 I was totally charmed by Olympic Dreams, a modest movie of modest goals but with enough honesty and a good enough gimmick to win me over. I rarely have any interest in watching the Olympics when they're on TV, but found myself totally invested in the story of this one Olympian at a crossroads of what she wants to do with the rest of her life and a somewhat nerdy dentist who reminds her just how much she loves what she does. It's a movie about real human connection set against a world of competition, where that sort of thing becomes difficult to find. Here's hoping for a Before Sunset-style follow-up in another four years.
Posted by Patrick Bromley at 12:00 PM