…and like some post-modern Alice, I have taken a long, slow slide down said hole this week in search of facts about the career of one Buster Keaton.

Apparently, the rights to the Keaton film library have transferred from Kino/Lorber to the Cohen Media Group. The first result of this transference was the wonderful Peter Bogdanovich documentary, The Great Buster, which I wrote about a few short weeks ago. The quality of the film clips in the new documentary is stunning. Cohen is doing new 4K scans of all the films. Trust me; this is material with which I am very familiar. Many other films came and went on my syllabus when I taught high school film studies for almost thirty years, but Keaton’s greatest feature, The General, and one of his best shorts, Cops, were always part of my curriculum. 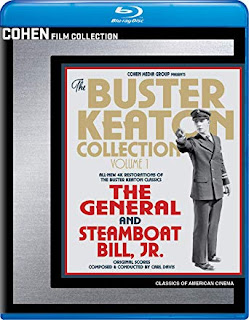 Two year’s ago, F This Movie’s Pope of Film named The General the 18th Greatest Film Ever Made. And he should know. You can read that column here.

I am guessing that the magic of streaming services is why I hear much less fussing and bitching on social media about home video releases “double dipping”—i.e., films or collections that keep getting reissued in better and better presentations. People are buying fewer discs because so much content is available to stream, which lessens the temptation to buy your fourteenth iteration of Halloween on shiny little disc.

Also, I just used the term “content” instead of “movies.” Please strangle me in my sleep with a twisted length of 70mm film. 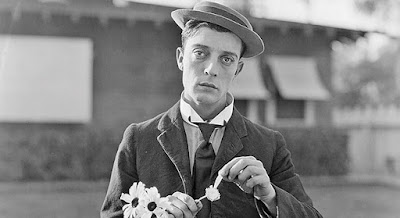 Because I am 1) old and 2) a Buster Keaton junkie, I have QUITE a double-dipping story for you. When I was in grammar school, I used to check out 8mm films from my local public library with my widdle libwawy cawd. I consequently became acquainted with the late, lamented Blackhawk Films of Davenport, Iowa and spent way too much of my allowance buying 8mm silent comedies that I would play on the little projector that Santa had brought me at Christmas. Let’s call that Dip #1.

When I graduated from college, the VHS boom was in full swing, and my local K-Mart offered a series of budget tapes of public-domain films called Film Classics. I bought another copy of Keaton’s The General on tape for the princely sum of $9.99. That was Dip #2.

A few years later, I became aware of a mail-order video store called Eddie Brandt’s Saturday Matinee. They offered tapes of other silent films of questionable legality (like Keaton’s Sherlock, Junior) at reasonable prices. That was Dip #3. (A few weeks ago, I was visiting my son in LA and drove past the actual Eddie Brandt building. I think they are still in business!) Around about this time, a colleague at my high school (Hi, Chuck!) thought I had too much money just lying around and so introduced me to the wonders of laserdiscs. That was Dip #4. The Image Entertainment laserdiscs were quickly replaced by the Kino/Lorber Art of Buster Keaton laserdisc box sets. That was Dip #5. 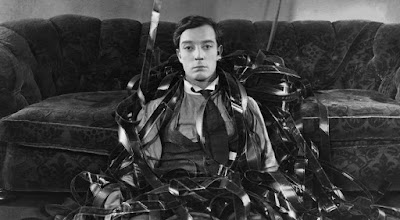 Then DVD hit the market. The first thing DVD’s did, for those of you who were not yet born, was to kill laserdiscs dead dead DEAD! (DVD’s were much less expensive than laserdiscs.) The Kino/Lorber Buster Keaton box set became a must-buy. That was Dips #6 AND #7—you see, I was stupid enough once to lend two discs from that box set to a ne’r-do-well student because he missed a week of class. I never saw those discs again, obviously. Because it made me sad to look at that impressive, expensive box set with two of its discs missing (and because I did not want to have to replace the ENTIRE impressive, expensive box set) I found a Japanese knock-off of questionable legality on eBay, just to replace the two missing discs.

Years passed, and Blu-ray discs were introduced, necessitating the purchase of Kino/Lorber’s 14-disc Buster Keaton Collection. That was Dip #8. A few years later, Kino/Lorber released improved transfers of some of the films in neat, double feature Blu-ray discs. That was Dip #9. Finally, last week, Cohen Media Group released its new 4K scans of Keaton’s The General and Steamboat Bill, Junior. That, friends and neighbors, was D-I-Fucking-P #10.

I have now purchased these same films in so many goddamned iterations, you can refer to ME as Dip #11. Because… I am a dip. Like I said, this is material with which I am VERY familiar. 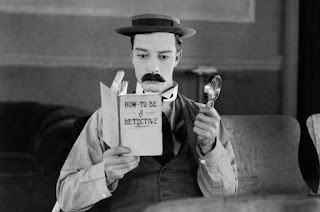 The new Chen Media Group Blu-ray of The General is amazing. (Granted, one of the previous versions that I am using for comparison is the old Image Entertainment laserdisc that had nitrate damage in two scenes.) The fine detail that the new Cohen 4K transfer reveals is startling and revelatory. In the scene where Buster tries and fails to register for the Southern Army (“Don’t blame me if you lose this war,” says Keaton via a title card in one of the few examples of verbal humor in his silent films) you can now clearly see the store signs in the background of the town square set. Every tree and bush during the climactic battle scene is rendered clearly, adding a layer of realism to the scene. After all, Keaton told his crew, “Make it so real that it hurts.” I thought that I had seen the best that this film could ever look at home years ago. I stand corrected. The Cohen Media Group transfer of The General is the best video version of a silent film that I have ever seen. It deserves a place in every serious cinephile ’s collection.

While canoodling about on the Internet doing research for this column, I also discovered that the Bogdanovich documentary, The Great Buster, is now available on Blu-ray disc. (It was previously available only as a paid rental or digital download from the Amazon Prime video streaming service.) I also discovered that the magnificent Kevin Brownlow and David Gill silent film documentary, Hollywood: A Celebration of the American Silent Film, is also now available (all thirteen 50-minute episodes) for sale or rent from Amazon. Just last year on this very website, I was all sturm and drang that after its original VHS and laserdisc releases, this amazing series went OOP for decades. You can read that rant here.

Another superb Kevin Brownlow documentary—Unknown Chaplin, which originally premiered on Thames Television and PBS—is also now available on Amazon. The price to rent EACH episode of EACH documentary is the princely sum of… ONE DOLLAR. 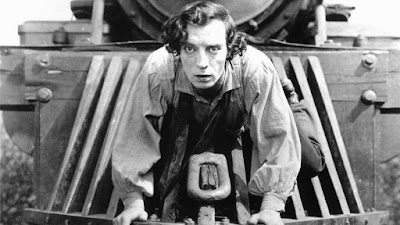 And finally… any of my readers who live in the Chicago area are in for a real treat. In two week’s time (that is, from Friday, May 31st through Thursday, June 6th) the Music Box Theater (the happiest place on Earth) is hosting Frozen Fire: The Complete Works of Buster Keaton, Part One, which will include screenings of six of his features in differing rotations over seven days. Films screened will include: Sherlock, Junior; Battling Butler; The General; Steamboat Bill, Junior; Seven Chances; and The Navigator. Three of the screenings will feature live accompaniment by Dennis Scott on the Music Box’s Mighty Wurlitzer theater organ. A series pass for the entire week is only $35. You can get more information here. For me, this is the theatrical revival event of the year.

Don’t live in or near Chicago? Simply walk a few blocks and stay at that new fancy hotel, The Zachary, which the Ricketts family just built across the street from Wrigley Field. It’s only $500 a night. You can stay there for the entire Keaton Festival for only $3500, which is probably less than what I have paid over the years for Keaton’s films on celluloid, tape, laserdisc, DVD, and Blu-ray disc.

I’m calling it a bargain.