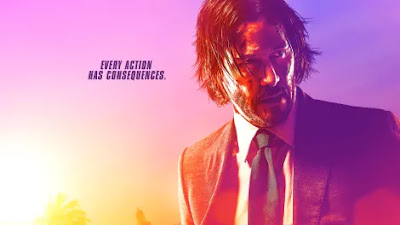 Three movies in and the John Wick franchise feels like it's just getting started. The latest entry, John Wick Chapter 3: Parabellum (which, according to the movie, translates to "Prepare for War"), contains the best action of the series and continues to go deep instead of wide, expanding the mythology by digging insanely deep into the world of professional assassins. I'd be hard pressed to call it the best of the series, but that's only because every entry in the series has been fantastic. It's certainly the one that kicks the most dick. And axes the most heads. And stabs the most eyeballs. 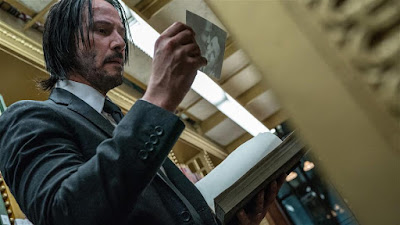 Parabellum opens immediately following the events of John Wick: Chapter 2, with Wick (Keanu Reeves, as if it needs to be said) excommunicated from the order of assassins for spilling blood on the consecrated grounds of the Continental Hotel. With only one hour to get out of New York and an open contract on his head, Wick is the target of every single assassin in the city. As a woman known only as The Adjudicator (Asia Kate Dillon) comes to town to clean up loose ends, Wick scrambles to stay alive and work his way to a meeting with the high table, calling in favors from old friends (including Anjelica Huston and Halle Berry) along the way. So many heads get shot.

As good as the action has been throughout all of the John Wick movies -- it helps to have stunt coordinator-turned-director Chad Stahelski at the helm of all of them -- there is something next level about the choreography in Parabellum. This movie is not fucking around. There's an early fight scene with a library book that alone is worth the price of admission, topped moments later when John Wick kills some guys with a horse, topped a little while later with a knife fight, which is topped a little while later with a massive shootout that includes Halle Berry and two of the best dogs ever. Ok, to be fair, I'm not sure the shootout tops the knife fight, because I don't know if anything could top the knife fight (or its punchline). But just the fact that this movie contains one untoppable sequence but spends its entire runtime attempting to outdo itself makes it essential Heavy Action viewing. There's no way we're getting a better action movie this year. 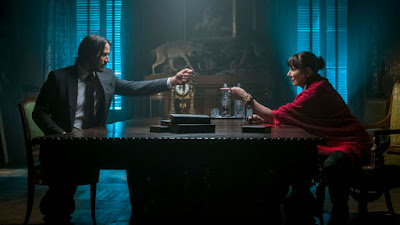 I have mixed emotions about just how beloved Keanu Reeves has become in the last five years or so, both as a screen presence and just as a human being. Of course I want that for him because he deserves it. But as someone who has genuinely loved him as an actor and a person since the late 1980s, I have to confess to a little "took you long enough" when I see everyone gushing about him online, maybe because I have had to put up with years of taking shit for calling him one of my favorite actors. Whatever. It's in the past. What is in the present is John Wick Chapter 3, in which Keanu continues to be a gift to American action cinema. Parabellum continues to push the form forward, combining expert choreography with great physical acting and neon-soaked, art deco set design. If John Woo's action cinema was operatic, the John Wick movies are balletic (there's a reason ballet appears so frequently in Chapter 3). As the films continue to move away from the more grounded realism of the first entry and plunge us deeper into this shadow society, it continues to get weirder and more abstract so that by the time we're in a room made entirely of glass or walking through the desert with Halle Berry and two German Shepherds, it all still makes sense. It's John Wick logic. 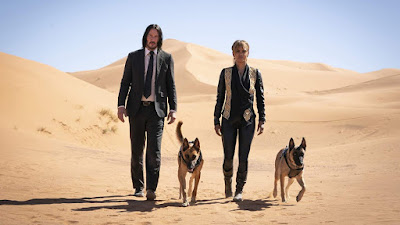 I haven't even mentioned the appearance by Yayan Ruhian or the casting of Mark Dacascos as the movie's big bad, proof alone that everyone involved with making this movie loves the action genre and knows what the fuck they're doing. His performance is a joy, and it's obvious and both he and the character he's playing are having the best time. I felt the same way watching Parabellum, which had me cackling at the brutality and insanity of the violence and just how well choreographed the action is. The set pieces are musical numbers, only Fred Astaire and Gene Kelly are shooting people in the head. They're breathtaking. Parabellum is breathtaking, to the point that it almost exhausted me by the end. I'm not complaining. The moment the credits hit, I found myself hoping this team would start shooting Chapter 4 tomorrow.

My dick is ready.
Posted by Patrick Bromley at 5:00 AM