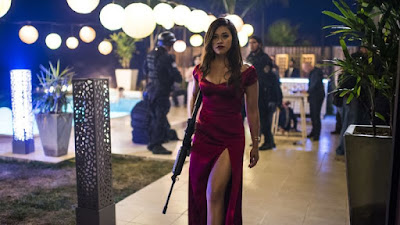 “La bala settles everything,” kingpin Lino Esparza (Ismael Cruz Cordova) tells Gloria Fuentes (Gina Rodriguez), the terrified makeup artist he’s been holding captive at his palatial estate. As he models proper use of the AR-15 rifle, he reminds Gloria that as long as her friend Suzu Ramos (Cristina Rodlo) is missing – and as long as she needs his help to find her – she’s going to have to learn to defend herself in a firefight. Gloria doesn’t want to be there; she only wanted to help the police find the men who abducted Suzu, police who turned out to be agents of Esparza’s Las Estrellas cartel. But Gloria is holding her own. After DEA officer Brian Reich (Matt Lauria) abandoned her, she’s decided to hear Lino out. He may be her best chance to free Suzu from the corrupt Tijuana police chief Saucedo’s (Damian Alcazar) human trafficking ring. All Gloria has to do is win the Miss Baja California Pageant and an invitation to his Saucedo’s bedroom. Once Lino has her location, he’ll take care of the rest. 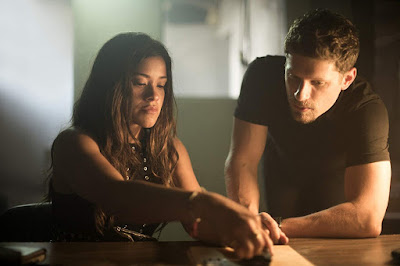 Not all goes as planned, of course, but you knew that. In fact, you know more or less everything that’s going to happen in Catherine Hardwicke’s Miss Bala, an uninspired remake of Gerardo Naranjo’s 2011 Spanish-language film of the same name. Though the Twilight director shows a flare for action and a genuine interest in smaller human moments, there simply isn’t enough meat on Miss Bala’s bones to generate any compelling or memorable drama. It’s a frustrating exercise in missed opportunities: Gloria’s nervous passages through the U.S./Mexican border are prime real estate for Sicario-esque action set pieces, but none materialize. Lino’s preoccupation with Gloria’s poise and beauty might have served a “conflicted loyalties” subplot, but that dies on the vine. Both are as trite and well-worn as anything else in Miss Bala, but hell, at least they’d add some texture. Instead, we get a serviceable actioner with a bizarre third act – the aforementioned pageant, which I’ll come back to – and a questionable franchise hook that suggests a depth of character we never actually see.

Issues aside, what we do get is substantial evidence that Jane the Virgin’s Gina Rodriguez should be a movie star. She imbues Gloria with a quiet fearlessness and finds small opportunities for vulnerability that couldn’t possibly exist on the page. She wrings Miss Bala out like a sponge, making everything she can out of each second of screen time. It’s not a complex role, of course, and there’s very little character arcing to be done, but there are many actors who would play Gina as helpless where Rodriguez plays her incredulous. She plays her desperate, but not pleading. She holds her shit together without making anything look too easy. And then, when asked to pose as a beauty queen, she manages to coat her expression in just enough false confidence to convince strangers without losing the sadness behind her eyes. It’s a nuanced and subjective thing (and, admittedly, doesn’t add much to Miss Bala’s overall quality), but Rodriguez deserves praise for molding something real out of stock materials. 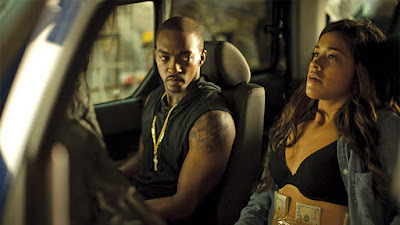 Alright, so, this pageant: Remember Suzu? Gloria came south from Los Angeles to do her best friend’s makeup and accompany her to the competition. The pair hit a nightclub to schmooze the local influencers beforehand, and it was from there that Suzu was abducted by gunmen. Right. Got it? It’s as good an inciting incident as any other, but it has very little to do with Gloria, herself. As a result, there’s nothing thematically interesting about her return to the pageant as a competitor (and winner, thanks to a few well-placed bribes). The whole thing feels perfunctory. It’s bizarre. It feels like an artifact from the original Miss Bala, in which the Gloria character was ALSO a frequent pageant competitor. But none of that works here. The “beauty queen-turned assassin” of the marketing campaign isn’t the character we’re given in the film. Was this Miss Bala chopped up in editing? Were parts reshot? It’s hard to tell, exactly, but when Anthony Mackie shows up as a CIA recruiter looking to enlist Gloria’s future services, it’s not exactly clear what they are or what would motivate her to accept. 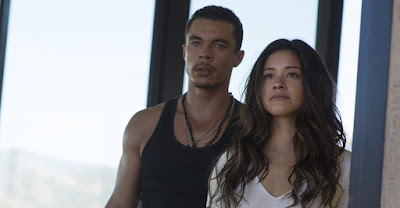 It’s hard to watch a female-driven revenge yarn like Miss Bala and not pine for the cold brutality of Sicario or the joyous ostentation of Coralie Fargeat’s Revenge. Even Walter Hill’s ill-advised The Assignment is more layered and distinctive. But Miss Bala’s lack of originality doesn’t entirely dilute its entertainment value. It’s solid. It’s workable. Rodriguez is a star. The truth is that there are time when “middle of the road” is a death sentence, and there are times when it’s exactly what we need. Where Miss Bala falls on that scale is entirely up to you.
Posted by Patrick Bromley at 5:00 AM