Reserved Seating Swings for the Fences: THE FAN (1996) 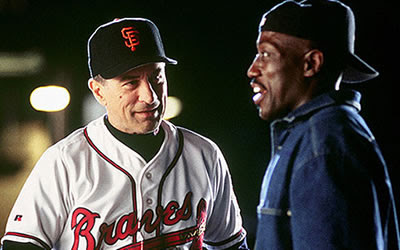 Adam: The next baseball review in our ongoing series is the 1996 Tony Scott thriller The Fan, starring Robert De Niro as Gil Renard, an insane knives salesman obsessed with the San Francisco Giants new superstar outfielder, Bobby Rayburn (played by Wesley Snipes). Gil starts out pretty terrible and slowly gets worse as he loses his job (he understandably scares the customers) and his ex-wife files a restraining order against him so he can’t pass down his shitty ways to their kid. With nothing to occupy his time, Gil fixates on Rayburn, taking out the outfielder’s competition and insinuating his way into the slugger’s life. The film co-stars Benicio Del Toro as burgeoning Giants star Juan Primo (who looks a lot like current Chicago White Sox third baseman Yoan Moncada), John Leguizamo (underused as the Snipes character’s agent), and Ellen Barkin as a hard-nosed sports radio host with remarkable access to star players. She can just call them at will, they’ll answer and be on her show.

Rob: Not only that, but he seems to be a regular guest. He hangs on the line while random fans call in! He asks them for career advice! It’s nuts!

Adam: This is just the tip of the iceberg in the ridiculousness of The Fan. It’s a movie I’ve long been fascinated by even though I recognize it’s not good. This was my first time seeing it in many years and I actually don’t dislike it as much as I used to (I used to call it one of the worst baseball movies of all time). The difference is that movies nowadays are so vanilla that something as crazy as The Fan stands out and earns my appreciation. Rob, what do you think of the movie? Did you have much history with it before this viewing? Were you happy to see John Kruk? 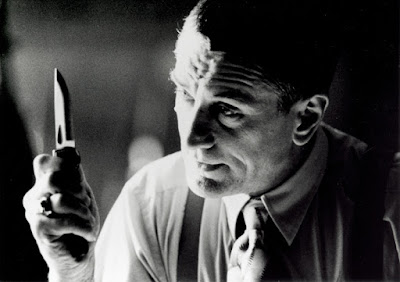 Rob: I knew I was in for something good when I saw Kruk’s name in the credits. I love few things in life like I love the 1993 Philadelphia Phillies. They were like a bar league softball team who somehow made it to the World Series. They were paunchy and awkward. They were suburban dads fueled by peanuts and Bud Lite. They were glorious.

Anyway, this turned out to be my first viewing of The Fan, despite the fact that I was absolutely positive I had seen it before. It’s very, very ‘90s and very, very Tony Scott. That’s less of a criticism than it sounds, though, because while the stylization keeps us at an emotional distance from the characters, it also enhances the film’s inherent campiness. That works in its favor, I think, though I’d argue it never goes far enough. When I read a logline for a film like The Fan, I want to see it go as over the top as possible. A douche-tacular John Leguizamo? Ellen Barkin as a sardonic sports talk radio host? Benicio Del Toro as a cocky slugger? A climax that goes all Naked Gun? It all falls short of full bore gonzo, but the pieces are in place, at least.

Adam: Is De Niro giving a good performance in The Fan? I can’t tell. It’s method acting insanity. I think Snipes outshines him subtly by comparison.

Rob: So, here’s the thing: I actually think that Robert De Niro is miscast in The Fan. And look, I get it. Taxi Driver. The King of Comedy. Cape Fear. He’s the obvious choice for this kind of obsessive malcontent. But he just feels off in this one. He doesn’t gel with Scott’s frenetic swagger the way he does with Scorsese’s. I’m not entirely sure I can explain why just yet, but never is this more apparent than when Nine Inch Nails comes over the soundtrack. I mean, De Niro is cool. The coolest. But he and Trent Reznor do not live on the same planet. It’s just the wrong choice. I agree that Snipes outshines him here, and I find myself wishing that both were in different, more tonally coherent films altogether. 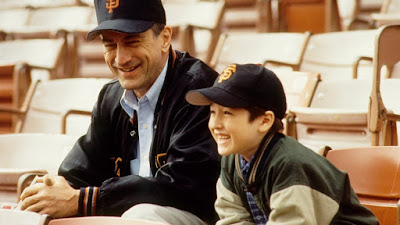 Adam: I have a bunch of random questions for you about The Fan.

1. Is it weird that Bobby Rayburn is so much a Barry Bonds type but then the movie references Barry Bonds, meaning he exists in this universe? Where is Bonds playing if not in San Francisco?

2. Why the Rolling Stones thing with the De Niro character? Is it a Scorsese movie homage?

3. Do team meetings at knife companies usually have the boss repeatedly stabbing a car door during demonstrations?

4. Is it just me or is the lady in the Stanford hat (who continuously looks at De Niro’s kid with concern during a Giants game) also terrible because she kidnaps the kid out of the stadium? I get that De Niro left him and Stanford lady took the kid home to his mother but….still kidnapping, right?

5. Did you know that you can go in and out of a baseball game? I know that you can’t, but De Niro can. How far was his customer visit if he can leave from his seat, exit the stadium, get in his car, drive to the meeting and then drive back and walk back to his seat in basically an hour?

6. When Gil brings his kid a pizza as an apology for leaving him at the ballpark, why did he put the soda in a bag? Is that a San Francisco thing, soda in a bag?

7. Wouldn’t Bobby’s Giants teammates not like him wearing his old Atlanta Braves jersey underneath his Giants jersey in plain view of the locker room?

8. Why would Bobby ever mope and criticize his own teammate on sports radio? That shit for sure would not happen in 1996. Maybe it would in 2019, but not ‘96.

9. Did you know that if you’re going insane your inner monologue turns into Nine Inch Nails music?

Rob: How did Gil get to his son’s little league game while under a restraining order? And how the hell did Rayburn’s agent not work out the logistics of his jersey number before the deal was finalized? He’s no Scott Boras, that’s for sure. And can we talk about The Fan’s insistence that professional athletes would hang out at a local dive bar to “get away from it all and relax”? And why did De Niro pick the Braves jersey out of Rayburn’s closet? You know, the team that beat his Giants in the last Postseason? I mean, I get it, that’s your guy and all, but he didn’t have a Giants jersey? He’s wearing a Giants hat! Am I missing something? And speaking of which — and with all apologies to our readers in the Bay Area — I have a hard time enjoying any film that asks me to empathize with San Francisco Giants (see the 2010 NLCS). That team is on my lifetime shit list. I’m hoping my Phillies poach Madison Bumgarner off them any day now. 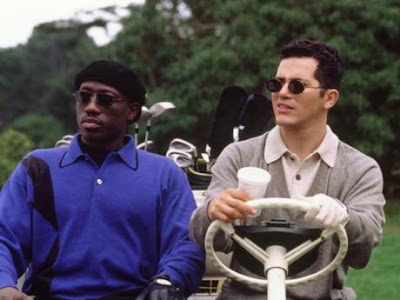 Adam: To be fair, there are some things I appreciate about the movie. It’s not as successful, but I enjoy the Strangers on a Train-type interaction on the beach late in the film between De Niro and Snipes. I think if the movie honed in on that more (and earlier) it would have made for a better film. The two stars have good chemistry, so it would have been nice to see them together more often. I think The Fan does a solid job representing the pressure a high-priced free agent faces in a new market with a new team. That’s very real in sports, where your salary ties you to an expectation of performance. I also appreciated how superstitious Rayburn was about needing to wear “his” uniform number (#11) and how he goes into a performance spiral when Juan Primo (the current owner of #11) won’t give it to Rayburn.

Rob: That number thing is super realistic, as baseball players are especially famous for their superstition. There are ways to put a positive spin on that loss, though. Phillies right fielder Bryce Harper made a HUGE impression with Philly sports fans when he chose not to wear #34 (the number he wore with Washington) because it was our beloved and dearly departed Roy Halladay’s number. He also forfeited his family’s traditional #7 because third baseman Maikel Franco wears it. Hey, national baseball media: We don’t mind that Bryce is hitting .230. We love him forever because — unlike Bobby Rayburn — he cares. He’s ours. You can’t have him back.

This has been your Bryce Harper minute. Carry on.

Adam: What did you think of Tony Scott’s direction? This seemed to be when he really cranked up the experimental style he put into overdrive with his next films. It felt like a proto-Any Given Sunday at times, actually.

Rob: The Fan is definitely a stop on the path from, say, The Last Boy Scout to Man on Fire, but it may have been better served by a harder lean into bombastic nonsense. The NIN stuff feels half-baked. The sequence with Rayburn’s son never goes far enough to be distinctly sinister. That camp factor I mentioned earlier never comes entirely to fruition. I like Tony Scott in general, though. Actually, can I use this opportunity to confess that I love Domino (2005)? That movie is 90% hand-cranked camera, something The Fan could have used more of. Also Keira Knightley. Could have used Keira Knightley.

All in all, The Fan feels like a very near miss. It’s very watchable. It’s competently made and full of fun details and distractions (I need to know more about Ellen Barkin’s sports talk show and De Niro’s in-car tie rack), but Scott doesn’t ever dig in the way he does in other projects. He’s tolerating it, sure. But there’s not quite enough indulgence. Is there a director’s cut floating around? More knife-fu? More Giants ties? Can we get some Fever Pitch season ticket sniffing up in here?

I seem to have gone off the rails. Sorry. 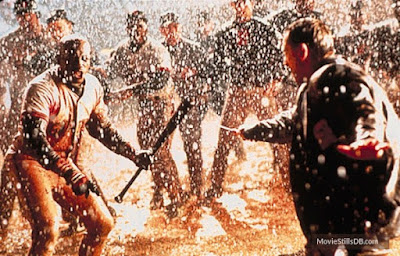 Adam: In closing, pretending this was a real season for the Giants, can’t you just picture fans being like “Ugh, 1996. Remember when we went to that game where the umpire got shot to death on the field and our #4 and #5 hitters were murdered by that same umpire? Really messed with our momentum that year.”

Rob: A full-on Mexican standoff occurs on the pitcher’s mound during a rainstorm in a nationally-televised Major League Baseball game after an imposter umpire tries to pitch a knife at a three-time All Star. Do Vegas bookies have contingency plans for things like that? How was Rayburn’s at-bat eventually scored? This was pre-replay, after all. And did the other players seriously not know about the fucking hostage situation involving their teammate’s son? Didn’t that come up in the pre-game umpire’s meeting? Maybe this movie is more bonkers than I’m giving it credit for.

You know what? Mark Ahn for The Fan. It’s derivative and kind of tame for Tony Scott, but hell, I liked talking about it.

Adam: What are we reviewing next week?

Rob: Our All Pacino series goes back to the mattresses with The Godfather Part II.