To celebrate Monty Python’s Life of Brian on the occasion of its 40th anniversary, the film received a limited re-release last week in theaters nationwide. Although it has been available for a while on both Criterion Collection Blu-ray disc and the Netflix streaming service, I hadn’t seen Life of Brian in a dog’s age. I attended one of last week’s anniversary screenings and received a nifty souvenir packet. Contents included a small poster, the lyrics to “Always Look on the Bright Side of Life” so that I could sing along at the film’s conclusion, a sheet of stickers, a cardboard beard (useful for women who wish to attend public stonings), and a pamphlet containing an essay by Sanjeev Bhasker—“Why Monty Python’s ‘Foul, Disgusting, and Blasphemous’ Life of Brian Wouldn’t Get Made Today”—that originally appeared in the British newspaper, The Telegraph.

Are you all jealous yet? 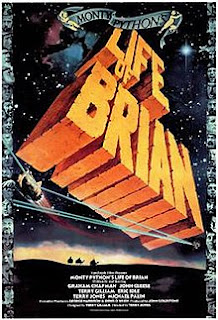 AN ANNOYING AUTOBIOGRAPHICAL PAUSE: I hold Life of Brian dear to my heart, and not just because I am a rabid Monty Python fan. When the film was originally released in August of 1979, I was a junior in high school and an occasional film critic for my school’s newspaper. I remember attending a sneak preview of Brian so that my review could appear on the Friday the film actually opened, achieving a level of professionalism rarely achieved in the annals of high school journalism. I loved the film, though at the time I didn’t think it as good as Python’s previous film, Monty Python and the Holy Grail (an opinion I have since reversed.) I would give anything to have a copy of that review. Say, do any of my readers happen to have a spare copy of the RMHS Pacer dated August 31, 1979?

The Plot in Brief: Brian Cohen (Graham Chapman) is born in a manger right down the road from another famous manger-baby, and lives his life contemporaneously with the hero of the New Testament. Brian grows up and becomes a member of the People’s Front of Judea, a political group opposed to the Roman occupation of the Holy Land. His participation in their activities leads to his arrest and crucifixion. Because this is a comedy! 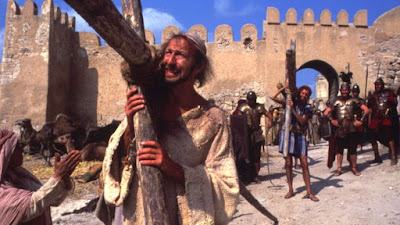 I was surprised at how fresh this film is and how it seems to address a range of current issues: the consequences of blindly following nonsensical dogma against one’s own self interests; people’s inability to break away from a herd mentality; and how a surfeit of hubris can make some people feel that they’re “too smart” to fall for the truth. At one point in the film, Reg (John Cleese), leader of the People’s Front of Judea, angrily concludes, “All right, but apart from the sanitation, medicine, education, wine, public order, irrigation, roads, the fresh water system, and public health, WHAT HAVE THE ROMANS EVER DONE FOR US?”

Honestly, I was moved by the sincerity and simplicity of Brian’s message: “Look, you've got it all wrong. You don't need to follow me. You don't need to follow anybody. You've got to think for yourselves. You're all individuals! […] That's the point! Don't let anyone tell you what to do! You're all different! You've all got to work it out for yourselves.”

I guess that’s the gift that political satire keeps giving; it’s forever fresh because mankind is incapable of real change. I was surprised at how much I laughed out loud—not appreciative, nostalgic chuckles but big belly laughs that bounced off the walls of the theater. 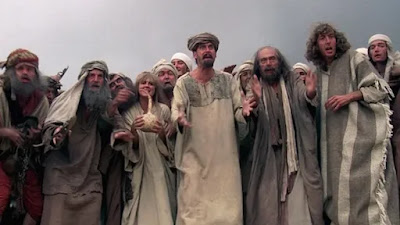 I was also surprised at how squeamish I had become about the crucifixion stuff at the end of the film. Although the filmmakers don’t show the actual nailing, you can clearly see the characters’ hands and sometimes feet are supposedly nailed to the crosses, and my dormant Catholic-school sensibilities became deeply disturbed. The film’s now-famous finale (the crucified cheerfully singing “Always Look on the Bright Side of Life”) strikes me as one of the most satisfying comedy conclusions of all time, as well as one of the gutsiest endings ever in an English-language film.

Speaking of films in English (Note to self: get better at segues), I learned by tweet of the existence of a fantastic new documentary about silent film clown Buster Keaton. The Great Buster: A Celebration, directed by Peter Bogdanovich, is currently available on Amazon Prime, but only to rent or buy. 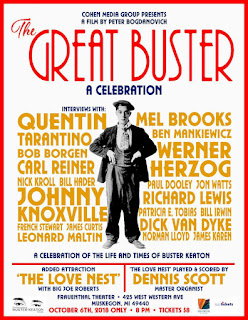 I am here to tell you that the film is terrific and well worth paying for: the tone is one of enlightened admiration, the clips are very well chosen, and the choice of talking head interview subjects is astounding. Both James Karen and Norman Lloyd, who worked with Keaton, were interviewed before their passing last year. Quentin Tarantino and Johnny Knoxville both weigh in with astute observations about Keaton. Mel Brooks, Carl Reiner, and Dick Van Dyke (who delivered the eulogy at Keaton’s funeral) are interviewed about Keaton’s comedy. Bogdanovich himself narrates. The film is a funny and concise summation of an incredible career. Buster Keaton, as Werner Herzog helpfully points out in the documentary, helped INVENT cinema. 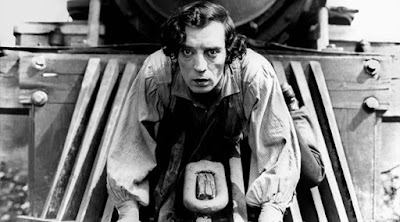 Watching the Buster Keaton doc and Life of Brian reminded me of what a low point film comedy currently finds itself in. So many big Hollywood comedies consist of characters who are shaped like human adults but who act like idiots, chimps, and assholes for ninety minutes. One looks at the work of Keaton and Python and sees the opposite of “hack”: comedy with perspective, style, and a point of view; comedy interested in surprising us, delighting us, or even astounding us. Python and Keaton are not merely trying to fill the screen with ninety minutes of nonsense and fart-noise. Buster Keaton and Monty Python remind us that every decade contains funny filmmakers that go the extra mile to make funny films that go beyond funny—funny films that can also confound or clarify or criticize or confront or comfort. I desperately hope that we are due for some of those kinds of comedies soon—films like The General, Modern Times, Duck Soup, The Apartment, Dr. Strangelove, The Graduate, M*A*S*H*, Monty Python’s Life of Brian, Groundhog Day, Rushmore.

What comedies would YOU add to the “beyond funny” list, Gentle Reader? I could use a good laugh.
Posted by Patrick Bromley at 5:00 AM