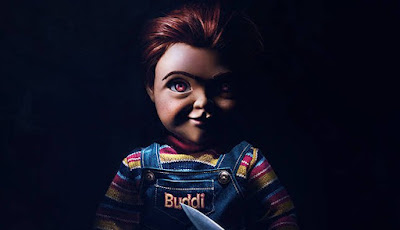 The new Child's Play is an unusual case: it's a movie that's better than I could ever have expected it to be while still not being a movie I like very much. I suspect this has more to do with me than the film, which is competently made and even quite enjoyable at times. For a studio horror movie, it's surprisingly gory and nasty. More importantly, it chooses to forge its own path rather than slavishly imitate its predecessor. Yes, it's clearly Child's Play, but it has been reconsidered practically from the ground up. It's the same model with new parts. 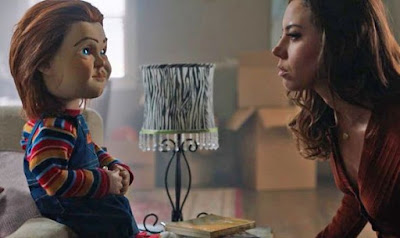 Aubrey Plaza plays Karen Barclay, a single mom in a new apartment working a crummy job at a big box store and trying her best to raise her hearing-impaired adolescent son Andy (Gabriel Bateman, who I recognized as the kid from Wolfie's Just Fine's incredible "A New Beginning" video). Sensing his loneliness and inability to find friends in their new town, she brings home a Buddi doll -- a state of the art new toy that has the ability to pair with all your devices and even learn to be as lifelike as possible. Little does she know that this Buddi doll -- which she names Chucky for no reason other than it has to be his name because, hey, that's his name -- is defective, having all its safety protocols removed by a disgruntled Vietnamese factory worker in the movie's prologue. Chucky wants nothing more than to be Andy's best friend in the whole world, meaning he'll kill anyone who makes Andy unhappy or who poses a threat as a new best friend. Toys can be such jealous assholes.

I like that this new Child's Play doesn't replay the whole "doll possessed by the soul of a serial killer" angle, opting instead to tell a tale of technology run amuck. Our dependence on technology, the movie seems to suggest, might just kill us -- especially if that technology begins to depend on us just as much. It weirdly has the effect of absolving Chucky of his sins somewhat, since he's no longer operating on evil free will but is instead just a victim of bad programming. His love for Andy seems genuine, even if he's got a funny way of showing it. When Mark Hamill was announced as the new voice of Chucky, I was worried he was going to be doing either a Brad Dourif imitation or a variation on his Joker. Instead, he's riffing on HAL -- a robot who simply wants to learn. 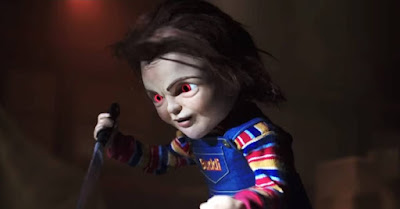 So there's a lot I like about the movie, not just in theory but in execution. The performances are generally good - though lacking the sweetness and warmth of the original (and don't get me started on the awful "Falyn and Pugg" characters). Bear McCreary's score is good. There's an extended shoutout to The Texas Chainsaw Massacre Part 2 (a movie the characters apparently watch totally out of order) that of course made me very happy because I'm me, even if it does suggest that impressionable minds might learn to kill from watching horror movies, a message I would have thought went out in the 1980s. The design of Chucky is awful, but the way the character is handled is interesting and different from the original. Director Lars Klevberg (Polariod) stages the kill sequences for maximum grodiness, and it's nice to see a big-name horror movie like this one go for broke in those moments. Two of the three major deaths are spectacular, with a Final Destination-esque spark of nastiness to them. They alone almost make the movie worth seeing. 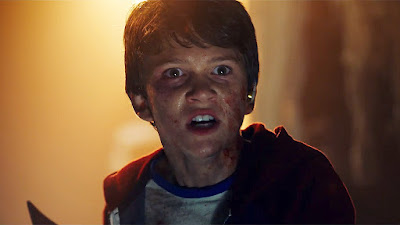 So why do I not like the movie more? It's hard to say. Maybe it's the film's sense of self-satisfaction, the way it smugly inverts the "boy's new best friend" tropes of E.T. down to Andy's red hoodie. Without having anything to say, though, it becomes just a reference, like the Tom Cruise Mummy quoting a bunch of better movies in the hopes of scoring some horror cred.  I actually had 2011's Fright Night -- another remake of a Tom Holland film -- in my head throughout most of Child's Play. Both are serviceable horror movies taken on their own, but to watch them is to see where they fall short and where their predecessors succeed. The 1988 Child's Play is a movie that shouldn't succeed but does, to the point that it's a genuinely special film and one of the high points of '80s horror. The 2019 Child's Play is a remake that shouldn't succeed but does, only so far as it's not terrible but unlikely to be remembered as much more than a horror trivia question. Of course, who knows? Maybe another viewing will allow me to watch it as its own entity and not in relation to a movie I love a lot. I've been wrong about such things before.
Posted by Patrick Bromley at 5:00 AM