Thoughts, news, and reviews as I lazily empty my “In Bin” during the dog days of summer. 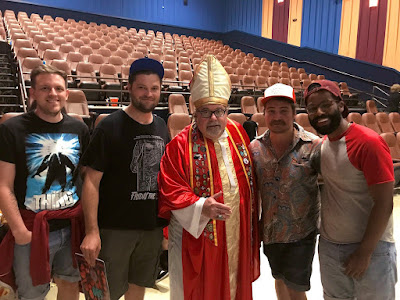 We sold out the theater (I know, I know; a few of us sold out ages ago.) We all enjoyed a beautiful theatrical screening of Back to the Future. Someone walked off with the “Enchantment Under the Sea” poster we purchased and displayed so that people might take social media-ready selfies. A collector in possession of a mint 1985 Delorean parked it in front of the theater. I dressed up as the Pope of Film. We all had a fun and lively hour-long conversation that became our 500th PODCAST! We met fans of the site from far-flung corners like Ohio, Toronto, and a different place in Ohio. Many thanks are due to all the nice people who came out. It was the ginchiest! BTW: I can neither confirm nor deny that the F This Movie Episode 1000 Extravaganza to be held in 2029 will feature a screening of Exorcist II: The Heretic.

ITEM: I saw a movie this past weekend that just might challenge January’s Serenity for the title of Worst Film of the Year. 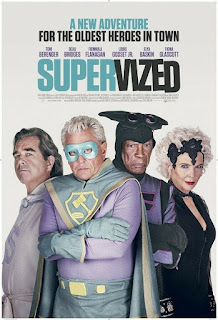 Through some fluke of region-specific, contractually obligated screenings, my local multiplex is currently showing Supervized, the new Steve Barron film, starring Tom Berenger, Beau Bridges, and Louis Gosset, Jr. To say that it is bad is an understatement. The film concerns a large group of over-the-hill superheroes all living in a retirement home in Ireland. I know—comic gold! After the screening, I tried in vain to put my finger on just what had gone wrong: could it be the languid pace, the uninspired script, the plot lovingly stolen from Don Coscarelli’s Bubba Ho-Tep, the amateurish special effects, the bewildering shifts in tone from flatulence gags to social problem film sincerity, the too-dark cinematography, the drab color palate, the drab costumes, the drab performances, or the drab jokes?

My wife made a joke as we walked to the car that not only addressed the film’s stultifying dullness, but the extreme weather swings we’ve been having around here. “Of course the weather feels different than when we got here—we were in there for FIVE HOURS.” (Ha! She’s a funny lady.) Noel Murray, of the Los Angeles Times, said about Supervized, “A genial comedy that'd be easier to like if it weren't so excruciatingly unfunny.”

That night, serendipity arranged for delightful local horror host Svengoolie to show Village of the Giants, one of Beau Bridges’ first starring vehicles. Bridges’ first credited film was released in 1949. Good Lord, this man has had a 70-year career! He’s earned more respect than for cynical producers to cash in on movie audiences’ lingering affection for Beau while “rewarding” him with jokes about how senior citizens smell. This fabulous Baker Boy deserves better. Tom Berenger was nominated for an Oscar; Gossett won one. Sheesh.

ITEM: Shout Factory announced at the San Diego Comic-Con this past weekend that it will be releasing a third volume of Universal Horror Classics in time for Christmas. 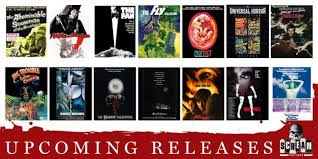 This is good news for all Classic Monster Fans. I reviewed the first volume two weeks ago. The second volume is being released TODAY (You’re welcome.). It contains Murders in the Zoo, Mad Doctor of Market Street, The Strange Case of Dr. RX, and The Mad Ghoul. When friend of the site Heath Holland commented on my review and brought up this second volume, I opined that if I ran the zoo, Volume II would have included Murders in the Rue Morgue (1932), Tower of London (1939), Man-Made Monster (1941), and Rondo Hatton vehicle House of Horrors (1946).

Well, now I’m trying not to break my own arm, patting myself on the back because beggars can’t be choosers, but two out of four ain’t bad. Volume III will indeed contain two of my picks (Tower of London and Man-Made Monster). They are joined by the in-name-only “remake” of The Black Cat (1941) and Horror Island (1941). This is another mixed bag, to be sure, but I would rather have these discs than… me, waiting until I have the house all to myself and then acting out my own Universal Horror films, complete with elaborate scripts, costumes, and imaginary guest stars. (this week: Beau Bridges as “The Mad Dr. Murderghoul!”) I may gripe a bit about the choices, but I will be first in line to purchase Volumes II and III, especially if they contain the commentaries and extras that made Volume I so much damn fun.

BTW: If you haven’t yet checked out Heath Holland’s website Cereal at Midnight, what are you waiting for? It’s the absolute ginchiest.

ITEM: As some of you may have seen on social media or heard about on our last podcast, my wife’s new book, Everything Seems Significant: The Blade Runner Poems, is about to be published by BlazeVOX Books. 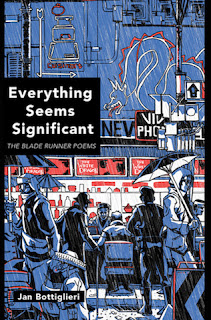 I count myself lucky that I was one of the first non-replicants to read it, and although I recognize my bias in this matter, I think it is the best thing she ever wrote. Like the film, this book does so many things at once: it comments on the film and its making, reminds us of what makes Blade Runner special, and illuminates its central themes in a way that is both personal and universal. Awhile back, Jan sent the manuscript to Hampton Fancher and David Peoples, the screenwriters of Blade Runner; they both loved the book. You can read their blurbs, learn more about the book, and even read a short preview HERE.

If you are a Blade Runner fan, if you are a film fan, if you are a poetry fan, I urge you to check out this book. It’s as if a commentary track, an academic lecture, a deeply personal critical essay, and a poetry reading were somehow fused… colliding with attack ships on fire off the shoulder of Orion.

Okay, JB Babies, I haven’t taken off my F This Movie t-shirt since last Monday. Now it’s your turn: have any of you seen Supervized? Who’s going to pick up Universal Horror Classics Volume II? Isn’t Blade Runner the best? I await your responses below.
Posted by Patrick Bromley at 5:00 AM