Serenity is one of the worst movies of 2019. Serenity is also batshit crazy. Serenity contains a twist ending that elevates all the other shitty twist endings ever attempted in the history of cinema to stunning works of intellect. The Village? Genius! Tim Burton’s Planet of the Apes? A higher plain of exquisite twistdom! It is difficult to describe just how bad this movie is. Words fail me! 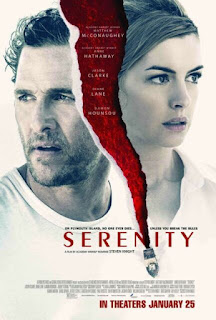 What we have here is a modern film noir concerning Baker Dill (Matthew McConnaughey) who runs a fishing charter boat on tourist mecca Plymouth Island. His first mate is Duke (Djimon Hounsou) who is unlucky. Dill seeks an elusive giant tuna and is so bent on catching it that he will gleefully ignore paying clients whenever the tuna appears. I don’t just mean that he leaves them waving money on the dock—I mean Dill threatens these boozy tourist fishermen-wannabes with a knife and makes them hide below deck while he plays Captain Ahab with Charlie the Tuna. Needless to say, Captain Dill does not get much repeat business.

Let it be known that I would like “THE TUNA’S NAME WAS JUSTICE” carved onto my tombstone.

Dill is dating an amorous widow named Constance (Diane Lane). Many nights he can be found in her sweaty embrace. Dill is angry because he can’t catch the giant tuna and never has any money. Constance is angry because she keeps loaning Dill money and because she is an Oscar-nominated actress who is given nothing to do but look longingly out of windows.

This is just the first ten minutes!

It starts as a pretty standard noir revenge plot: Dill’s ex-wife Karen (Anne Hathaway) shows up on the island unexpectedly; shares with Dill that her new rich husband Frank (Jason Clarke) abuses her; suggests that the mistreatment is having a deleterious effect on their son, Patrick; and urges Dill to take Frank out on the boat and murder him. She offers him ten million dollars to do so.

So, does the good man go astray when the femme fatale shows up with promises of money and sex? Will the awful man be done in through a combination of malfeasance and circumstance? Will the film test the audience’s collective patience with a screenplay and performances that are absolutely bonkers?

Unfortunately, Serenity is not a film noir; I would hard-pressed to even come up with a genre for it, though I can think of some adjectives that describe it: risible, corny, unbelievable, runny-nosed, up-its-own-ass, and moronic. What we have here is a motion picture that, based on the evidence onscreen, was reverse-engineered from its crazy twist. Yet the twist does not make sense and, the more one ponders said twist, the less sense it makes—so the reverse engineering is for naught. This movie simply does not work as narrative, as entertainment, as any known entity on our planet.

In answer to what you’re wondering…. NO. No, I’m NOT going to spoil the twist. I am urging you to SEE this incredible film before it leaves theaters. We, as film lovers, are spoiled by the professional and entertaining products that Hollywood studios release on a weekly basis. When is the last time you saw something really bad… fascinatingly bad? I thought so.

Plus, the scenery and locations are stunning. Serenity is like taking a two-hour vacation in the middle of winter. The day I saw it, the temperature outside was 1 degree.

I saw Serenity at an early matinee screening frequented by senior citizens. As soon as the end credits began to roll, I fine-tuned my Spidey-sense because I desperately wanted to overhear what these seasoned filmgoers thought about the shit soufflé they had just been served.

The first thing I heard was an elderly gentleman loudly exclaim, “Bah!” I suddenly realized that, though I had certainly read it in books and heard it in movies, I had never in my life heard a real, live human make that noise. “Bah,” as it turns out, may be one of the most keenly observed reviews of this film.

Next, I heard an elderly lady turn to her cohorts and exclaim, “I’m not sure I really understood that!” My heart went out to her. Five dollars poorer thanks to misleading Hollywood marketing and peer pressure, she felt sure that her two friends must have understood this nonsense better than she—this movie is so dismally bad, she BLAMED HERSELF. I felt like standing up in the still-darkened theater, screaming, “No, you’re FINE, there’s nothing to understand,” and pressing a five-dollar bill into her frail, trembling hand.

The final old couple out of the theater paused briefly at the exit. The husband snorted, “fucking ridiculous” and disappeared into the restroom. Mic drop.

It was all I could do to restrain myself from trying to organize an impromptu discussion group in the lobby.

Later that night, Adam Riske saw it and we briefly texted about how magnificently bad it was. His screening just over, Riske could only manage the following text: “Dude… dude… Serenity.” When he had at last gathered his wits, he jokingly asked for MORE Baker Dill movies to be made. I suggested that “Dill… Baker Dill” could be the James Bond for the new millenium. We spent the rest of the evening suggesting possible titles: Fishfinger, From Plymouth with Love, Thunderboat, Tuna is Forever, For My Son Only, On Her Majesty’s Secret Tuna Fishing Charter, Albacore Royale, MoonBaker, and Live and Let Cliff Dive. My wife suggested that Baker Dill would drive an Aston Marlin. The whole conversation made me really glad that I had seen Serenity.

THE CRITICS RAVE: Christy Lemire of RogerEbert.com writes that “Serenity is terrible and insane.” Peter Travers of Rolling Stone calls it “an infuriating mess.” Miles Surrey of The Ringer suggests that we “REOPEN ALCATRAZ AND GIVE STEVEN KNIGHT A LIFETIME SENTENCE.” Should I See It’s Michael Ward raises the stakes by suggesting “The year? Nah. Serenity ranks as one of the worst films of the decade.”

Should you see Serenity? Remember—the tuna’s name is Justice! I think that’s all you need to know to make this important life decision… for yourselves.
Posted by Patrick Bromley at 5:00 AM