MIDSOMMAR Goes Through a Glass, Darkly

One of the earliest of Midsommar’s many arresting images is our gods’-eye view of the car carrying the five main protagonists as it slowly begins to invert. The perspective pauses a bit while the car continues in a frame that is completely upside down; gradually, it rights itself as the car crosses the boundary into Hälsingland, to the commune at Härga, where the film’s trippiest events take place. Though Hälsingland is a real region in the actual country of Sweden, the sequence sends a clear message that we’ve left the world we know for a much different reality. We’ve stepped through the looking glass—or, to quote another relevant modern folk tale: We’re not in Kansas anymore.

(By the way, the rest of this column is super-spoilery, so if you haven’t seen Midsommar yet, stop reading and go. It’s a horror/relationship/dramedy that is well worth your time, with an outstanding lead performance by Florence Pugh. I can’t believe she was also the lead in another film I wrote about recently, Fighting With My Family! ) 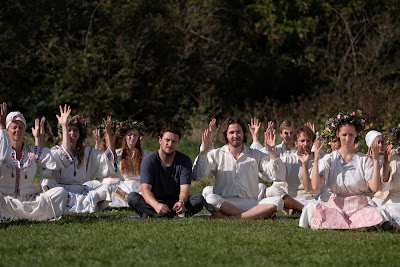 Don’t dismiss director Ari Aster’s camera flip as a gimmick; I think it works as a clue to two of the film’s most interesting aspects. First is the film’s penchant for foreshadowing. Over and over, the film shows and tells us what is about to happen—and yet, when it happens, we (and more so, the film’s characters) are shocked. Notice the blue pajamas Dani’s parents die in, the crowd of flowers around her photo on their nightstand, or the message she leaves them on their phone (“of course, I’m here if YOU need anything.”) Check out the poster above her bed—a crowned young girl kissing a giant (though somehow harmless) bear, or the flaming bear on Grandmother Siv’s wallpaper. “Wait—is that a PUBE?” Mark asks Christian as he pulls one from a mouthful of meat pie. Of course it is! We saw the storyboards on a tapestry waving in the sunny breeze. It was very instructive and very, very clear.

Even Dani’s last name—Ardor—is a clue to what she needs and who she really is beneath her shapeless sweaters. It’s also not a coincidence that her first name (and that of her sister, Terri) are names that could easily belong to a man. That is the biggest foreshadowing of that inverted camera angle: the film is about to flip the polarities of some of our most deeply-engrained assumptions. 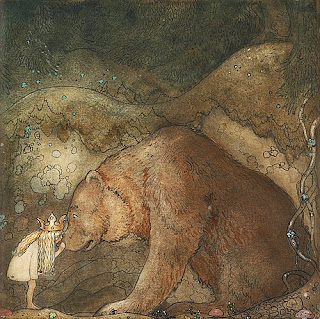 What if women had all the sexual power, instead of men? What if nature was not something to take from, but something to give to? What if suicide was a gesture of hope, not despair? What if a horror film was set somewhere it never gets dark? These reversals function for the viewer the way that the mushrooms and flower teas do for the characters in the film: they disorient us, mess with our sense of proportion, and invite us—or force us—to be “open” to the experiences playing out. That sense of disorientation amps up Midsommar’s horror and its comedy; in many screenings (including mine), audience laughter mixes with gasps of shock and revulsion.

One of the most personally disorienting reversals, for me, is how Midsommar approaches Dani’s depression and grief. I’m convinced that whoever first said “misery loves company” has never been truly miserable. In my experience, this is one of the most difficult things to manage about both grief and depression: they can be incredibly isolating. Just when you really need to be, as Pelle says, “held” by those around you, that darkness puts up a wall. Not only can you barely stand to be around others—truth be told, many others aren’t thrilled to be around you. When Dani learns of the tragic loss of her family, she breaks down beyond the capacity of speech, wailing into Christian’s lap as he stares silently ahead, unable (or unwilling) to do anything but passively let it happen. It’s heartbreaking, but it’s not surprising; we’ve already seen how incapable Christian is of giving emotional energy to this relationship. He’s already checked out. 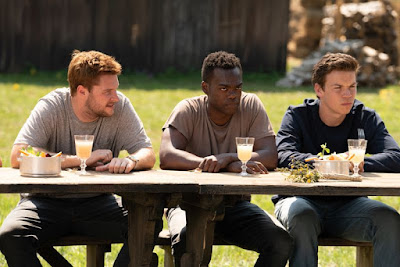 In Härga, those poles are reversed. Like every experience—sleeping, working, supper, sex, watching Austin Powers—powerful emotions here are shared. When Dani breaks down later in the film, her new “sisters” keen and wail with her, meshing their breath with hers in cathartic release. It’s a stark contrast to her relationship with Christian or with her real sister and parents (on Dani’s phone, the unanswered calls she sends them are even labeled “failed to connect.”) Instead of trying to suffocate her feelings so that she can try to give others what they need, she’s finally being given what she needs, and she doesn’t need to beg or feel guilty about it. Dancing around the maypole, earning her place into the “family,” is the first time we see Dani look genuinely happy. Is it any wonder that, as May Queen, Dani chooses to spare a member of this new family instead of the emotionally impotent Christian?

Actually, we assume she chooses—the film never actually shows us how this moment goes down. This ambiguity is another reversal: What if a horror movie didn’t show what, in other films, would be a climactic moment of revenge? By my count, there are seven murders in Midsommar, but we only see one: Christian’s, as he sits immobilized while flames engulf his protective layer of bear. 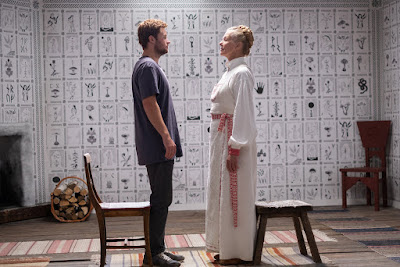 Midsommar leads us into a mirror world of mythos-made-real—a place of midnight sun, subverted expectations, and fairy tales with life-and-death consequences. It’s autological in the way it explores the power of folk tales by upending their tropes. Yet I don’t see Dani as an Alice-through-the-looking-glass: I see her as our Dorothy, whirled from her loneliness into an upside-down Oz. Mark, the “skinned fool” stuffed full of hay, is the Scarecrow, but he never gets his brain. With his academic ambition, Josh is the Tin Woodsman, but he never finds his compassion (remember, he knows what Ättestupa is—ritual geronticide—and he goes anyways, you know, FOR RESEARCH.) Christian is our cowardly beast, stuffed into his scary fur but too weak and/or frightened to even commit to a thesis topic, much less a human woman with emotional needs.

And then there’s Dani herself as the ultimate horror trope reversal: a “final girl” who survives not by escaping, but by staying. She’s Dorothy, who longs for home and discovers she’s had the power to be there all along.
Posted by Patrick Bromley at 5:00 AM