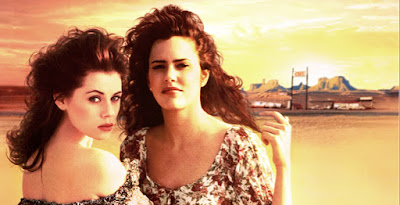 “Some people are afraid of disappointment. Me, I’m just afraid of not having any daydreams left,” muses Shade (Fairuza Balk) after a failed romantic overture in Gas, Food, Lodging. Allison Anders’ 1991 solo feature feels like the wistful escapism of Terence Malick’s Badlands confronted by the chorus of The Replacements’ song "Unsatisfied":

Look me in the eye and tell me that I’m satisfied...
Everything you dream of is right in front of you
And everything is a lie.

In case that makes the movie sound depressing, I’m here to assure you it’s not. The characters in this film are more dreamy than desolate, accustomed to heartache but holding out for someone to come along and prove their cynicism wrong.

The opening shot carries us down a two-lane blacktop that follows the train tracks, with flat fields of browning grass on both sides and nothing but telephone poles and power lines as far as the eye can see. The occasional semi or pickup passes, but they’re moving in the opposite direction while the film is heading toward the small town (if it even qualifies as a town) of Laramie, New Mexico. Most of Laramie’s citizens live in trailer parks; the main attraction is a truck stop diner. That’s where single mom Nora (Brooke Adams) works as a waitress to support her teenage daughters, Trudi (Ione Skye) and the aforementioned Shade.

Shade spends most of her time at Sunn Cinema, obsessed with the black and white Mexican movies that play there. Her favorites star Elvia Rivero (Nina Belanger), whose elegance and passion move Shade to tears. She leans forward in her seat and practically hugs herself, taking in every word Rivero’s character utters. She seems to feel the movie star is speaking directly to her and guiding her in an almost mystical way. 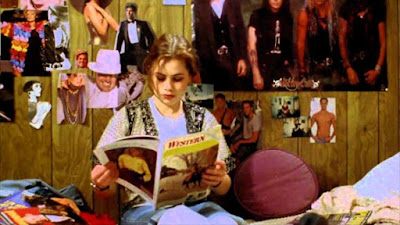 When she’s not at the theater, she’s sprawled across mismatched sheets and blankets in the bedroom she shares with her sister Trudi. Shade’s walls are covered with posters of Elvia Rivero, family snapshots, cut out pictures of horses and cowboys, and a giant poster of David Bowie. Trudi’s side of the room features a Motley Crue poster and photos of male models (including Fabio) in various stages of undress. If you’ve ever had a sister, you’ll probably find yourself smiling in recognition at the way these two go from rivals to besties depending on the day.

Trudi describes herself as “one of those girls with a rep.” Her boredom with small town life manifests as snarling rebellion. She skips school, comes home at 2am, gets into shouting matches with her mom, hooks up with guys who drive monster trucks and have fiancees waiting for them at home. When a stranger (Robert Knepper channeling his best Tim Roth by way of early '90s Johnny Depp) with a British accent and a black light takes an interest, she’s suspicious at first.

“So this is your method? You get girls in the car and show them they can glow in the dark?” He explains that the light is part of his work with rocks, and because it illuminates which ones contain minerals that make them glow different colors. Not the answer she was expecting. She tags along to the cave he’s currently excavating and things between them get cozier from there.

The characters in this movie feel so much like real people that writing this review, I want to introduce you to every single one of them with a juicy little anecdote. “This is Javier, he has an embroidered wall hanging of JFK in his living room. Have you met Darius? He’s got a great shoe collection and after one conversation with him, you’ll never think of Olivia Newton John the same way again. Over there we have Hamlet, he owns a satellite dish company and loves to bowl. Some people think he looks like Michael Rooker but he thinks of himself more as a Woody Harrelson type.” Just like the folks that inhabit small towns all across America, each of these people has a story, and the movie gives us a tantalizing glimpse into each of their lives as they intersect with the women at the center of the story. 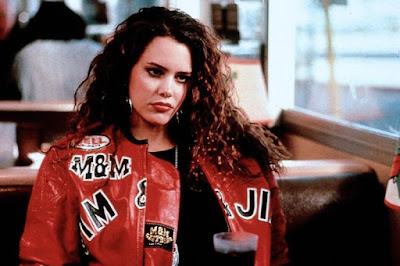 Allison Anders excels at capturing small moments and every day interactions but making them feel profound. Maybe it’s just because we aren’t accustomed to seeing the intimate banalities of female life onscreen, but I found myself chuckling at arguments about who used the last of the tampons without buying more. For something that about 50% of the population has experienced at least once, I realized I don’t think I’ve seen that particular conversation or problem in a movie before.

I also appreciated a conversation between Nora and a male suitor after their first sexual encounter, where they spoke frankly about her pleasure and what it would take to improve the experience from her perspective. It was both funny and sweet, and something most movies wouldn’t take time to explore -- especially for a mom character. We often see moms as these saintly, nurturing types who live for their kids. And sure, that’s an aspect of motherhood. But you don’t have to be a “Bad Mom,” to borrow the phrasing of a 2016 movie, to have needs and desires. Women of all ages deserve pleasure, and this movie affirms that.

The visual composition on display in the movie adds to the languorous atmosphere. Anders uses fades between scenes, resulting in sort of double exposures that superimpose buildings or landmarks over characters’ faces. Even though the geography is nothing too remarkable, she and cinematographer Dean Lent capture some gorgeous shots that could make Terence Malick jealous. In some ways, this town and these people are like those glowing rocks -- unremarkable to the naked eye, but if you look at them in the right light, they’re absolutely luminous.

Watch this wonderful movie online via Amazon or a few other online outlets for about $3 or take the plunge on the Arrow Academy Blu-ray. I’d be surprised if you can look me in the eye and tell me that you’re unsatisfied after watching this one.
Posted by Patrick Bromley at 12:00 PM