SHE DRAINED MEN OF THEIR LOVES… AND LIVES!

The third great Universal horror cycle ended with a whimper, not a bang, when the studio released The Leech Woman at the bottom half of a double bill with Hammer’s Brides of Dracula in 1960. 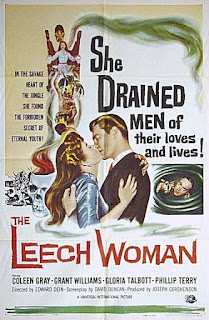 You can tell in The Leech Woman that no one at the studio is even trying anymore. Big genre talents from the 1950s had moved on: Jack Arnold, William Alland, Richard Carlson, Henry Mancini, even John Agar were no longer on the lot, leaving “Grade C” fare like Leech Woman to be produced by Joseph Gershenson, Universal’s former music department head. 1956’s The Mole People and 1957’s The Deadly Mantis had ushered in the era (era) of extensive stock footage in Universal horror films, so The Leech Woman features a twenty minute mid-movie safari that seems motivated only by the availability of plentiful B-roll from older Universal films.

The Plot in Brief: Bitter, disappointed endocrinologist Paul Talbot is having marriage troubles with his bitter, disappointed wife June (Colleen Gray). June is getting on in years, losing her looks, and searching for her lost youth at the bottom of a whiskey bottle. With the lazy serendipity that is a hallmark of mediocre script writing, ancient Mala (Estelle Hemsley) shows up in Talbot’s office, claiming to be 140 years old… and knowing the secret of eternal youth.

Said secret involves an expedition to deepest, darkest Backlot Africa to witness a tribal ceremony involving a mysterious powder and freshly squeezed pineal fluid from the gland of an unwilling victim (Is there any other kind?) After witnessing Old Mala being transformed by the process into the sultry and alluring Young Mala (Kim Hamilton), June wants in. June steals the pineal-gland-stabbing ring necessary to harvest fresh juice from victims (Don’t ask.) and literally takes a powder. After dispatching her husband in some convenient quicksand, it’s back to America for June to find out how young is too young… and how many men are too many? 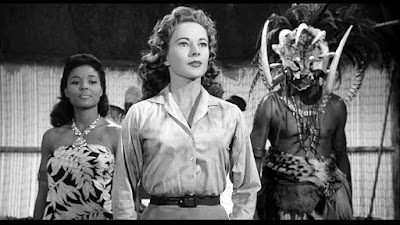 I will say this: The Leech Woman introduced me to the trope “World of Jerkass,” in which every single character in a given narrative is an irredeemable shit. According to the wildly entertaining website “TV Tropes,” this film also features the additional clichés “All Men Are Perverts,” “Crapsack World,” “Dr. Jerk,” “Dysfuntion Junction,” “Humans Are Bastards,” “Immortality Immorality,” “The Magical Negro,” “Quicksand Sucks,” and “Too Dumb To Live.” In fact, this film contains so many risible Hollywood plot stand-bys, it makes me wonder if screenwriter David Duncan wrote it on a dare to see how many hackneyed devices he could shoehorn into a single script.

If nothing else, The Leech Woman really made me grow in my appreciation for lead actress Coleen Gray. I never took note of her previously, precisely because she was a great actress who literally transformed herself from film to film. As it turns out, The Leech Woman’s Leech Woman was also the female lead in personal favorite noir Nightmare Alley, where she plays driven, amoral girlfriend Molly to Tyrone Power’s driven, amoral Stan Carlisle. She also played dishrag “I don’t deserve you, Johnny. Why do you put up with me?” girlfriend Fay in Stanley Kubrick’s The Killing. 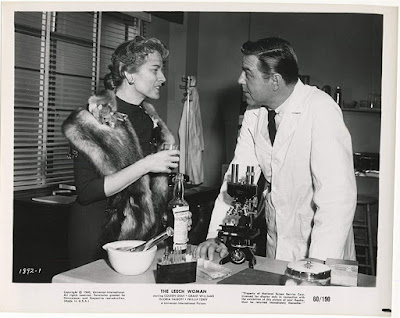 In The Leech Woman, Gray plays psychotic harpy June at ages 50, 25, 90, and several ages in between. I tend to have an eye and memory for character actors from film to film. Gray is SO different in every film that I never even made the connection. That, my friends, is RANGE.

Shout Factory’s new Blu-ray release has a lot to recommend it. The transfer is immaculate. Tom Weaver proves for the eighth or ninth time this year that he is a goddamned national treasure. His commentary track alone is reason to buy this disc. While making no bones about the dismal quality of the film itself, Weaver still serves up a heaping helping of trivia… and a twenty-minute recording of a phone interview he once conducted with Colleen Gray where they discuss The Leech Woman specifically. Weaver waxes nostalgic about his early days interviewing genre actors. Because long distance phone calls were so expensive, he would write out his questions and mail them to his interview subjects with blank cassette tapes upon which they could record their answers. The saddest thing on the commentary track is Weaver noting that, during his interviewing days, in his frugality he’d often use the same cassettes over and over again. How many interviews like the one we get on this disc with Gray were lost to time and expediency?

This is a disc that I can see spinning during Scary Movie Month in a few weeks for a fun, nostalgic, cheesy respite from more gruesome, gory fare. You should buy it! Please don’t just beg for mine—if there’s one thing I hate it’s a LEECH.

Ha! See what I did there? Now, excuse me while I have my pineal gland stabbed.
Posted by Patrick Bromley at 5:00 AM