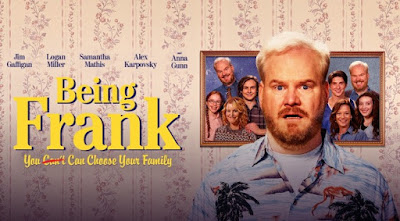 Get it? Like, “being honest.” Except his name is Frank. It’s like Oscar Wilde. You get it.

Parenting is really, really difficult. You never know if you’re doing it right (For all the “manuals” available out there, not a single one of them has all the answers) and it’s hard not to feel like you’re always falling short. You want your kids to have everything, of course, and you want to be the one to give it to them. But, really, what the hell do you know? You’re a person just like the rest of us, and your parents probably messed you up good and proper way back when. Do you remember the first time you realized your parents were human beings, the first time they let you down or revealed something about themselves you didn’t think could possibly be true? Sure you do. It’s a wake-up call. An existential slap in your metaphysical face. It’s a rite of passage, the first mile marker along an ever-widening highway into chaotic oblivion. Shit. This got dark. Let me start over: Being Frank (originally titled You Can Choose Your Family) is a comedy about a dad who lies to his son. A lot. 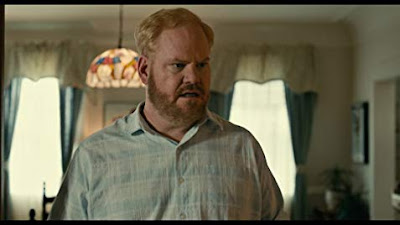 Written by Glen Lakin and directed by Miranda Bailey (feature debuts for both), Being Frank centers around Phillip (Logan Miller). Phillip is your Average Movie Teenager: He loves heavy metal, has a crush on the popular girl (Danielle Campbell as Allison), and has a dingbat best friend (Daniel Rashid as Lewis) who makes him look a thousand times cooler by comparison. Phillip can’t wait to graduate this summer and pursue his dreams of rock stardom while attending New York University. Trouble is, his overbearing parents won’t let him go. His dad, the titular Frank (Jim Gaffigan), is a football-obsessed oaf who inherited his father’s position at a ketchup factory. His mom (Anna Gunn as Laura) wants Phillip and his sister (Emerson Tate Alexander as Libby) to be happy, but doesn’t seem interested in starting trouble. Frank is insufferably strict. He might as well be a prison warden, as far as Phillip is concerned; home only between weeks-long business trips to Japan, Frank barely knows his son at all.

But when Phillip and Lewis sneak up to a lakeside paradise for spring break, the distance between father and son is closed pretty quickly. Frank — supposedly away — is there, too. With a young woman (Isabelle Phillips as Kelly). And a young man (Gage Polchlopek as Eddie). And a woman his own age (Samantha Mathis as Bonnie). No, it’s not weird sex stuff. It’s Frank’s other family, an entire life that he’s kept hidden for almost twenty years. Phillip is heartbroken, of course, but he immediately sees an opportunity to get back at his father. Posing as the son of Frank’s colleague, he digs into Family #2 like a tick, bro-ing down with Eddie and working up uncomfortable sexual tension with Kelly. It’s actually kind of disgusting how much Phillip seems to enjoy poisoning his father’s life, but how else can he cope with the horror of Frank’s transgressions? However, when Frank offers a sad story about lost love, wasted potential, and poorly-timed pregnancies, Phillip resolves to help keep his father’s secret as his mother and sister unexpectedly arrive on the scene. 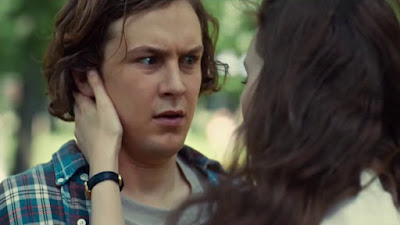 While it has absolutely zero bearing on the story whatsoever, it ends up being strangely fitting that Being Frank is set in 1992. It’s a script Tim Allen or Robin Williams might have taken on in their heyday, the kind of family comedy that plays seriously traumatic melodrama in that innocuous, pre-9/11 Touchstone Pictures sort of way. Jim Gaffigan gives Frank a big heart with a sinister edge, almost leaning into Dear Old Dad tropes knowing that they’ll keep him above reproach. He’s an absolute piece of shit, of course, but — as Wife #2 Bonnie later says — he doesn’t seem to believe he’s doing anything wrong. He hides behind his kids, insisting that he maintained this ruse for so long because he didn’t want them to suffer. Phillip is oddly receptive to that excuse, and it’s in his attempts to protect his father from himself that Being Frank hits a profoundly sad note. He doesn’t complain when he learns that Eddie is the football star Frank always wanted him to be or when Kelly tells him that Frank lets her drink alcohol whenever she wants. He internalizes his pain. He blames himself. He knows he shouldn’t, but how can he help it? How can any of us? 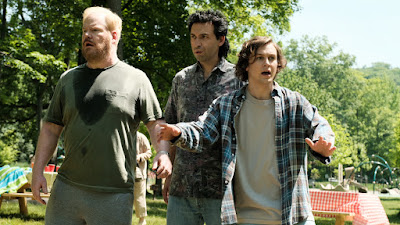 We do genuinely feel Frank’s pain, by the way. He loves his second family more than his first one. It’s a fact. He admits it. And it sucks. He says he’s hard on Phillip because he doesn’t want him to repeat his mistake of thinking he knew everything in high school — the girl and the job and the life that should have been enough, but never was. That’s ten kinds of fucked-up and absolutely no excuse for his behavior, but it makes a sick kind of sense. And sometimes, that’s all we can ask from our parents. They’re not perfect. Some of us, like Phillip, are here by colossal accident. It’s not our fault, but that doesn’t mean it doesn’t hurt. Like Phillip, though, we can cope. We can accept our parents’ imperfections and love them anyway. We can try to be better, to let go of old insecurities and forge new opportunities for growth. We can learn. All this is to say that Being Frank is a surprisingly mature and insightful film about broken people trying to get along. You’ll never, ever laugh (it seems to have to occasionally be reminded it’s a comedy), but you might find yourself forgiving it and liking it, anyway. Funny how that works.
Posted by Patrick Bromley at 5:00 AM