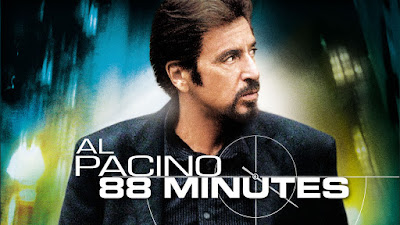 The review duo who wonder why this movie is 108 minutes.

Rob: Our All Pacino series returns this week with 2007’s 88 Minutes. Directed with dazzling incoherence by Righteous Kill’s Jon Avnet, it stars Pacino as forensic psychologist and Ladies’ Man About Town, Jack Gramm. Dr. Gramm is a bit of a celebrity in the true crime universe, earning notoriety after his testimony put serial killer Jon Forster (Neal McDonough, who goes HARD into this role) on death row in 1997. Nine years later, on the eve of Forster’s execution, a copycat killer is stalking Dr. Gramm and framing him for new murders. Now, Gramm has — you guessed it — eighty-eight minutes to prove his innocence and stop the killer from claiming their most prized victim yet. Aiding Dr. Gramm are his assistant (Amy Brenneman), his students (Leelee Sobieski, Alicia Witt, and Ben McKenzie), and his FBI buddy (William Forsythe).

88 Minutes is some goofy shit, and I had a ton of fun with it. It’s the best kind of bad movie, one that’s filled with enough little quirks and curiosities to make even the most baffling moments entertaining. Off the top, I’d say my favorite was the leisurely pace with which Al navigates this supposedly-taught thriller: After being told he has less than two hours to live, he takes a walk over to the university to deliver a lecture. When that goes sideways, he runs in circles around the parking garage for a while. When he can’t do that, he brings a co-ed up to his apartment and just hangs out while the plot happens around him. You know how most movies have that midpoint confrontation between hero and villain? Al does this one from a recliner in his living room.

Adam: That scene was fantastic. It’s literally a guy calling into a television station to yell at the people on air.

Rob: At one point, he leaves his apartment and just starts walking down the street. The FBI guy has to grab him and force him back into the movie. It’s like he’s trying to escape it. For a story driven by a literal ticking clock, no one seems to be in much of a rush. 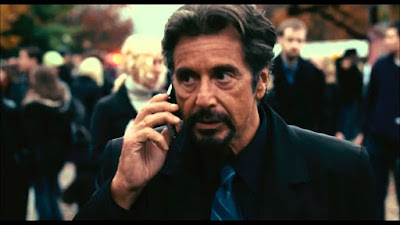 And the phone calls! Oh, the phone calls. Someone needs to make a supercut of every call Al makes and receives in this movie. It’s gotta be some kind of record. The number of times he says “Call me back!” or “Patch him through when you get ahold of him!” is incredible. The movie must know this, too, because one of the final shots is Al triumphantly throwing a cell phone off a mezzanine and watching it shatter on the lobby floor in slow motion. It’s cathartic.

Adam: I was keeping count until I gave up at 24 calls around 45 minutes into the movie.

Rob: I also love how Movie the names in this script are: Johnny D’Franco. Guy LaForge. Jeremy Guber. Sean McBain. Jack Gramm (a veiled Thomas Harris reference?). I love it. Anyway. Adam, what did you think of 88 Minutes?

Adam: Don’t forget that a character is named Mike Stempt. This movie’s bizarre to say the least. I had seen it once before this viewing. It was a poor-quality bootleg I bought at a convention before the movie was released in theaters (the film was delayed for almost 3 years). I remember not liking it or having as much fun with its ineptness back in 2008. I guess I’ve softened in my old age. This is camp of the highest order. I have no clue what Pacino is doing in a movie like 88 Minutes, but between this and his other Millennium Films/Jon Avnet 2008 outing (Righteous Kill), Pacino must have had a ball. They’re both movies selling so hard that this guy is the sexiest dude in town. It’s amazing. We’re introduced to Pacino with him being awoken by “Ms. New Booty” by Bubba Sparxx on the radio and then the next shot is a much younger naked woman doing a yoga pose. Shortly thereafter he’s dancing with women (to more mid-2000s era rap music) at a bar and Alicia Witt is professing her love to him. 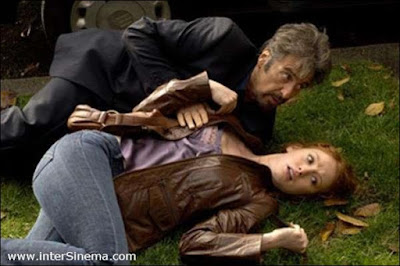 88 Minutes has a real mean streak to it which comes with the territory in serial killer thrillers and the pacing really shuts down in the second half. You mentioned before that William Forsythe pretty much drags Pacino back into the movie, and from that point on it feels very sluggish as the initial rush of silliness wore off a bit for me. But a lot of great stuff happened before that such as:

• An introductory scene where a character talks about the death of Princess Diana solely to give the audience a time stamp.

• A character saying, “This is such a beautiful conference room.”

• In the same scene, we stop cold for people to talk about having milk and cookies during a meeting. The cookies are there, we wait for the milk, it arrives, and nobody has the milk or the cookies.

• A character exclaims “Oh yeah!” because the Mariners are up 3-1 over the Yankees in the first inning of a game.

• The killer (who sounds like Jigsaw most of the time) writes “72 Minutes” on Pacino’s car even though they’d have no idea that he would get to his car with 72 minutes left in the killer’s countdown.

• Comical background shots like an old framed photo of Pacino where he looks more pissed off than any man has ever looked before, a shot in his apartment where he has a comical quantity of wine bottles shelved and a dramatic scene with Pacino and Forsythe in front of a poster for “Jet City Improv” where the tagline is something like “Taking comedy to new heights!”

Am I forgetting any other ones?

Rob: The cookies and milk in the conference room killed me. We’re not joking, folks. The movie literally stops cold for it. Also, it may just have been because I was watching with the subtitles on, but one of my favorite bits of overheard ADR was during the bomb threat evacuation scene. Someone yells to their friend, “Don’t worry! I grabbed your slides!” I also enjoyed how often Pacino says “Guy LaForge” out loud. He must have known how dumb it sounded and insisted on saying it as much as possible for his own amusement. I also really enjoyed how one character stops Pacino in the hallway to explain all of his character flaws to him. It’s like they realized they hadn’t fleshed him out yet, so they threw that bit in on page twenty-whatever. I really need to go back to Neal McDonough, though. He is eating this movie alive. His icy stare, his lofty speeches. His intensity paired so well with Pacino’s complete and utter lack of interest that I found it really charming.

Adam: I remember reading a sci-fi magazine back in 1996 and the cover was like “Neal McDonough - The New Face of the Genre” or something to that effect. It’s all I can think about whenever I see him pop up in anything. 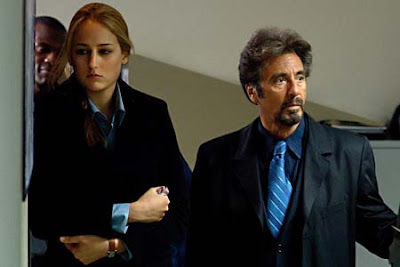 Rob: Where does this rank for you among the ‘00s Pacino we’ve covered?

Adam: Once Upon a Time in Hollywood > Insomnia > Two for the Money > Danny Collins > The Recruit > 88 Minutes > Righteous Kill > Manglehorn > Hangman

We sort of shot ourselves in the foot choosing most of the best of 2000s Pacino already. At least we have The Irishman in November. I’m needing a fix of unironically good Pacino after Manglehorn and 88 Minutes. We’ll have October off from the Al beat for Scary Movie Month. Next week we’re back with our lists of 5 horror movies we’ve never seen but are committed to getting to this Halloween season. I’m ready! Anything else you want to add about 88 Minutes? Where does this fall in your Pac2K?

Rob: I think if you swap Two for the Money and Danny Collins, you’ll have my order. Anyway, there’s only one thing that can properly close our discussion of 88 Minutes:

Adam: Lol. These seats are reserved.
Posted by Patrick Bromley at 5:00 AM