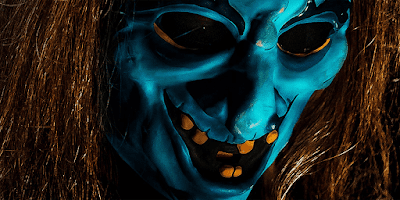 This is why I refuse to go into haunted houses.

With extreme haunts becoming more popular and better known, it only makes sense that the horror genre would follow suit and begin using them as the setting for more and more films. In the last few years alone, we've had The Houses October Built and The Houses October Built 2, Hell Fest, Blood Fest, Extremity, and last year's documentary Haunters, all about the world of extreme haunts. The premise of these movies is often the same: that haunts show some awful stuff which turns out to be real, not staged, and then the young people inside the haunts are systematically killed off.

That pretty well describes the plot of Haunt, the latest entry into this extreme haunt horror subgenre from directors Scott Beck and Brian Woods, who wrote and produced last year's A Quiet Place, and produced by Eli Roth. Katie Stevens plays Harper, a young woman on the outs with her boyfriend whose friends convince her against her better judgment to come out on Halloween night. They wind up at an extreme haunted house that turns out to be more real than they ever could have expected, then have to fight their way out to survive.

Yes, the setup for Haunt is pretty unoriginal. Where the film excels is in the execution. This is a slick, well-directed exercise, one that knows how to build tension and generate a scare. The kills are brutal, the photography (from DP Ryan Samul) handsome, the editing taut. It's all very well done, which is why I find myself surprised that I didn't care more. Haunt is a very well-made movie in which I had difficulty investing. That probably says more about me than it does the film, but here we are.

Stevens makes for a sympathetic final girl, but none of the rest of the characters manage to make much of an impression being being slasher fodder. That's no fault of the actors, all of whom do a fine job, but rather of a screenplay more interested in executing some mechanical beats than in really humanizing any of the victims. The haunt workers are exceptionally creepy and only become more so as the film goes along and makes a few surprise reveals. Beck and Woods' screenplay raises some questions it doesn't feel the need to answer, which is kind of refreshing -- it suggests that the world of the film extends beyond what we see on the screen, but not in a cynical sequel-setup kind of way.

Haunt is among the best of the recent slate of extreme haunt horror films. It's a mean-spirited, nasty bit of business executed with bold colors and precise direction that also managed to leave me a little cold. It's an effective exercise more than it is something I can grab hold of, but an effective exercise is an effective exercise nonetheless. This has been another good year for indie horror in what is truly a Golden Age of indie horror, and Haunt is part of that movement. We genre fans have it so good right now.
Posted by Patrick Bromley at 5:00 AM