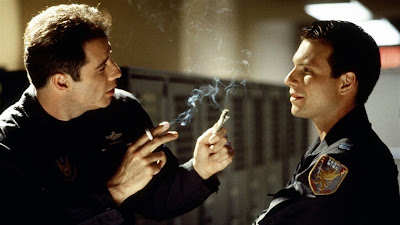 The review duo who went back to watch Unforgettable (1996), Broken Arrow, and Mr. Holland’s Opus.

Adam: Remember back when you went to the video store and picked up a stack of new releases to watch over the weekend? That’s the idea for this week’s Reserved Seating, but instead we’re going back in time and watching a trio of movies that were new releases at your video store in July of 1996. The first movie Rob and I rented is the Ray Liotta-Linda Fiorentino thriller Unforgettable (1996), directed by John Dahl. The film is basically The Fugitive with a brain serum twist, as Liotta plays a forensic doctor in search of the people responsible for his wife’s murder. He does this by stealing a memory drug, developed by a university scientist (Fiorentino), that allows him to relive traumatic events of the person whose brain juice he injects. It’s a weird movie.

This was my first watch of Unforgettable and I value how MGM it is (they were quite good at churning out star-vehicle dramas for adults throughout the ‘80s and ‘90s), but the movie didn’t really work for me. The premise is interesting but falls apart rather quickly with Liotta injecting himself with new brain serum whenever the plot is backed into the corner logic-wise. I’m a fan of Liotta, but after the first 30 minutes it’s mostly just watching the talented actor fall on the ground groaning while dripping in sweat as he has adverse reactions to the drug (which weakens your heart the more you use it). Fiorentino’s role is off-brand for her, as she’s playing a sort of nebbish scientist. You keep expecting her to turn (because why hire Fiorentino and not ask her to be what she’s known for? -- i.e. mysterious, femme fatale etc.), but it never happens. The plot really sinks this one for me, which made the last hour a drag. What did you think of Unforgettable? 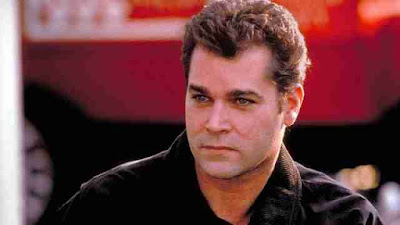 Rob: It’s a sopping wet blanket. I really didn’t like this one, at all. It’s one of those movies that struggles to pick a lane and ends up picking nothing. It’s a mystery that isn’t mysterious, a thriller that isn’t thrilling. I like Ray Liotta, but I think he’s miscast in this one. You may disagree (I certainly have a few gaps in his filmography), but it seems to me that you hire Ray Liotta when you want cocky and unhinged — think Goodfellas or Narc. He can temper that and make it charming, but he has to have a chance to come unspooled if someone comes at him the wrong way. However, his character here — despite the whole “accused wife killer” element — is warm Diet Pepsi. He’s never interesting, in control, or really driving the action. He blows. So does the movie around him, which — while definitely MGM in a good way, at times — also feels cheap and poorly-staged. The whole memory serum bit is goofy and half-baked. Christopher McDonald’s mustache bugged me. None of this works. It also doesn’t help that I’ve never been a huge Linda Fiorentino fan. Can you recommend something she really steals? Cause it’s not this. Mark Off on Unforgettable, which, you know, isn’t.

Adam: Mark Off for me too. As for Linda Fiorentino, I’m a fan of hers in The Last Seduction, After Hours and Vision Quest.

Rob: The second film on our stack is Mr. Holland’s Opus, a heartwarming 1995 drama starring Richard Dreyfuss as a struggling composer-turned-music teacher. As he adjusts to his new position, Holland is horrified by the student body’s — and worse, the faculty’s — ambivalence toward music appreciation. Determined to make his mark (and finally compose that great symphony), he and his wife, Iris (Glenne Headly), carve out a life for themselves over the course of his thirty-year career. 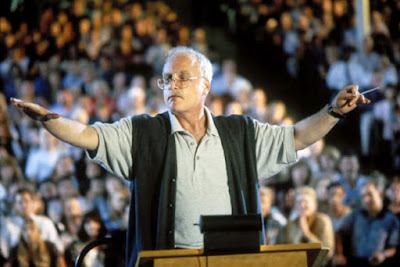 I’d seen Mr. Holland’s Opus at some point in my childhood, but this was the viewing in which I really appreciated it for the juicy piece of teacher porn it really is. Teaching is almost always romanticized in movies (see: Dead Poets Society, Stand and Deliver, etc.), but I don’t think I’ve ever seen it done as grandiose and unabashedly sentimental as this. That’s not a bad thing, really; Dreyfuss is good in the role (he has a be-vested, professorial quality that, at times, reminded me of our own JB), and movie has no qualms about wearing its heart proudly on its sleeve. It’s a generation-spanning, 2 ½ hour saga of modest, middle-American triumph. I especially loved the way Dreyfuss is clearly channeling John Williams in his conduction of the orchestra.

A few fun things I noticed as a real teacher deep in autumnal insanity:

1. No teacher shows up on the first day of school not knowing where their classroom is. This trope serves a narrative purpose in movies, but it’s total bullshit. We’re in there a month before school starts, cleaning desks and organizing books.

2. The principal (Olympia Dukakis) asks Holland for September-October lesson plans right away. Must be nice. Today, we have to map out the whole damn year. At least, I do.

3. I love the way classroom scenes in movies always start two minutes before the bell rings. They never show you the fifteen minutes it takes for everyone to find a pencil. The students are usually paying close attention to the teacher’s profound wrap-up speech, and the teacher is always cut off by the bell. They even shout homework instructions out as the kids are leaving! No one’s doing that homework, Jack. No one heard you. No one cares.

Anyway. I digress. What did you think of Mr. Holland’s Opus?

Adam: I thought of JB too when I was watching Mr. Holland’s Opus, partly because I went to a show at his high school that was also a retirement tribute. I like JB. He’s great people...just like Mr. Holland (Heath and the fictional one).

This was my first viewing of Mr. Holland’s Opus and I liked it a lot. It hit me square in my big sentimental heart. I think it’s a really terrific character study that wraps up with a similar ending to It’s a Wonderful Life. I find it beautiful and also sadly amusing that the takeaway is kind of “Hey, work your ass off thanklessly for 30 years and one glorious day, when you’re 60, people will give you an hour of appreciation.” I especially liked the scenes between Dreyfuss and Alicia Witt (as a smart, earnest student with minimal musical talent) because it was about using music to boost her confidence and not dependent on her being valued for being musically talented. This was a perfect Sunday morning movie and I’m glad this column finally gave me an excuse to watch it after never getting around to it for 24 years. Richard Dreyfuss is at the Days of the Dead convention in Chicago this weekend. Now I have something to talk to him about other than Jaws, which is cool. I hope he’s not cantankerous. P.S. I’ve had Dreyfuss singing John Lennon’s song “Beautiful Boy” stuck in my head all morning. It started within a dream and hasn’t stopped. I’ll sing it at the con to Richard Dreyfuss to transfer the tune back to its owner.

Rob: It had better make him cry. Last on the stack is Broken Arrow (1996), Hong Kong action legend John Woo’s sophomore American effort (after 1993’s Hard Target). John Travolta and Christian Slater are rival U.S. Air Force bomber pilots. One of them steals a pair of nuclear warheads, frames the other one for the crime, and threatens the U.S. government with catastrophic disaster if his demands aren’t met. That’s all you really need to know. Samantha Mathis plays the love interest. Howie Long and the Shawshank warden guy are in there. Delroy Lindo (DEL! ROY! LINDO!) shouts into a phone and flies in a helicopter. There’s a copper mine and a train-top fight. You get it. It’s awesome.

I’ve seen Broken Arrow like ten times, and I’ve loved every one of them. It’s not good — at least, not in that “good” way — but it scratches so many ‘90s action itches that it’s hard to hold any minor indiscretions against it. Travolta is still hot off Pulp Fiction, Slater is in his prime, and it introduces plot elements later recycled for The World is Not Enough! It also features one of cinema’s greatest dummy replacements and the quaintest world domination plan since Superman: The Movie: Threaten a nation for millions of dollars, use the money to make a prudent investment in an international auto manufacturer, and live quietly off the dividends. There are also some dull bits and some logical leaps, but Broken Arrow is a two-and-a-half-star movie that becomes a three-star movie through sheer gusto.

Adam, do you like Broken Arrow as much as I do? 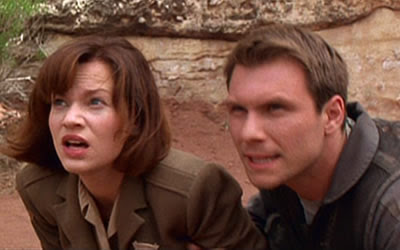 Adam: I like it possibly even more than you do. It’s not a perfect movie, but it’s a perfect movie. I’ve seen Broken Arrow so many times over the years that now it’s just something I like to have on, similar to Home Alone during the holiday season. John Travolta and Christian Slater stretch credibility in their roles (Travolta is so nice that he really has to go “bag of tricks” playing a villain and the go-with-the-flow Slater seems like he joined the military this morning) but that mutual miscasting results in a strangely great chemistry between the two. I was really impressed this time around by the physicality of Samantha Mathis’s performance. I said on the podcast recently how I wish the Mackenzie Davis was in ‘90s-style action movies, and Broken Arrow is what I’m talking about. Plus, how can you not love a movie where Howie Long is kicked out of a train car cueing the Wilhelm Scream? Reel talk: Every time I hear Frank Whaley quip about the definition of a “Broken Arrow,” I’m convinced this film has a terrific screenplay (it doesn’t). I also love how Delroy Lindo’s helicopter explodes in a crash with nothing to establish why they’re flying right into a wall. Broken Arrow’s the best. Face/Off is better, actually. Same with Hard Target. Whatever...you know what I mean.

P.S. Don’t listen to Travolta’s advice in the early boxing scene to look at the opposing fighter’s shoulder in a fight (because that’s where the punch is coming). I’ve tried that in video games and it doesn’t work.

Rob: That’s what you get when you read Reserved Seating, folks: Movie reviews and boxing advice. We’ll be back next week with more movie talk! Until next time…