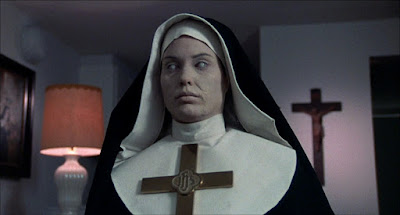 I watched a record amount of movies for Scary Movie Month this year, and that’s saying a lot for someone who (like all of you reading this) grew up loving movies and watching as many as I could. It’s the “as many as I could” part that is different for all movie lovers.

I am pretty lucky in that my family loved movies, so we went to the theaters often, and once VHS was available, my parents would buy their favorites. I also had a pretty sweet collection of “recorded off of television/cable” VHS tapes that I re-watched to an extensive degree. Yet, my family did censor much of what I watched -- understandable parenting on their part -- so I had a lot of catching up to do in later years. Maybe that’s part of the reason why my dream job in high school was to work at a video store, a dream that finally came true my senior year when Blockbuster (RIP) hired me. (Despite the fact that I could never be happy or succeed in a sales career, I more than once won the pre-sale contests in my BBV store. I suppose movies are the only thing I could ever really “sell” due to my genuine excitement any time a customer wanted to talk about them.) I continued my video store dreams part-time through college and then began my non-movie related career, and while I still saw a ton of movies every week -- more than anyone else I knew in real life other than Patrick (who was happily seeing all these movies with me) but less than some of our Twitter friends -- gaps naturally grew in regards to my movie knowledge. There are only so many hours in a day.

Year after year, Patrick and I saw as many new releases as possible. At home, we watched our favorite old movies and tried to catch up on classics from before our time. (There’s nothing I ever enjoyed more than going to the movies. And maybe eating dinner after said movies. Or before. As long as there’s food. Mostly pizza. Also, making out. But this is a family site.) 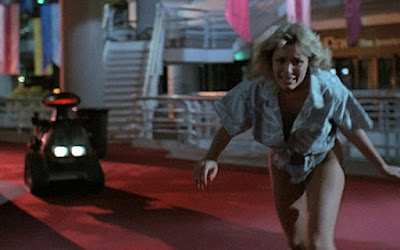 We were seeing around 100 movies in a theater every year and maybe equal that at home on (pre-Blu-ray) DVD. My point is, we weren’t slacking in our movie love and commitment. It’s part of how we met and first spoke to each other EVER: we really just loved movies. (We also somehow made time for family, friends, graduate school and non-movie events -- somehow! We are probably aging rapidly into cave trolls. Do cave trolls get enough sleep? Do they age rapidly? Am I still writing about SMM?) And yet…

THERE IS SO MUCH WE MISSED. So much specifically that I missed as I started my career -- a career that has me out of the house for usually ten or eleven hours a day… a career that almost always requires I bring work home with me. I managed to keep up with my movie love, but without having a flexible job that allowed for some work-from-home days as my hubby’s job allowed, for example, I certainly fell behind. I still kept up with new releases, but my career didn’t allow me the time to continue discovering older films in addition to going to the theater each weekend, and I had (and still have!) a lot of blind spots. Such is life. This is where today’s discoveries list comes in, because the following beloved classics are blind spots for me NO MORE:

(*Technically my second viewing, but my first viewing was overnight/early morning hours at a 24-hour horror movie Massacre a decade ago, and I think my body gave out on me, causing me to dream sweet dreams about Kurt Russell’s beard while I slept a little. Basically, I didn’t remember much other than his beard.)

I watched at least one movie a day for Scary Movie Month (Editor’s note: she watched around 70 for the month), but the above eight STOLE MY HEART and will now be at the top of my “to rewatch” list. I know there’s no need to recap plots here; F This Movie! has a following of horror lovers who have seen these films multiple times. You all already know how great they are too, and many have been reviewed on this site! But please let me say, watching these for the first time was an absolute BLAST. Screaming was often heard. Arms and legs (Patrick’s) were often grabbed/smacked (sorry!). 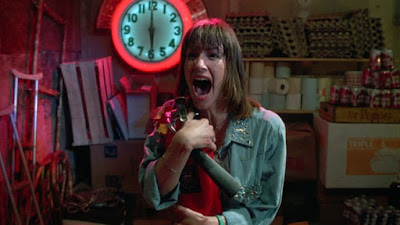 Texas Chainsaw Massacre 2 is a freaky, funny thrill-ride. Yes, it’s nuts that I had never seen the whole thing considering I’m married to the world’s biggest -- yes, truly the biggest -- Tobe Hooper fan. (Remember this?) It’s been discussed so often in our house that I felt like I had seen it. But finally I had a proper viewing, and I’m sure it surprises no one who knows me (House of 1,000 Corpses and The Devil’s Rejects are two of my most revered horror films in the past 20 years) that it checked all my boxes for a horror film that both incites actual terror and makes me have fun. I know the word “fun” is thrown around a lot as we all discuss movies, but it really fits here. Yet my old fears of being captured by crazies in rural U.S.A. get stoked here, too. It’s the perfect horror blend for me. Chopping Mall and Dawn of the Dead ticked a bunch of my horror movie boxes too (and let’s be honest, I still love a good mall in real life!).

Season of the Witch was another perfect choice since I am often in the mood for '70s everything, and I love its feminist point of view. I’m fascinated that upon its creation, the studio cut it up and released it as Hungry Wives, with the poster tagline, “Caviar in the kitchen; nothing in the bedroom.” (I’ll have the opposite, please. Thank you.) I also wish I could go back in time and be a fly on the wall during screenings or any discussion of this film. I’m so enamored by certain decades of the past ('60s and '70s being the top contenders) but shudder at the thought of having so few choices and opportunities as a woman then. The expectation to be incredibly subservient in almost all areas of life is true horror. 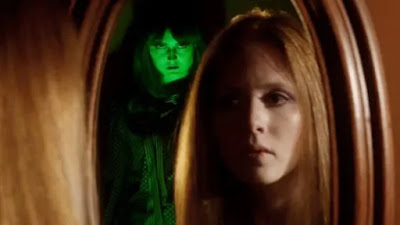 I understand the original film was lost for years, and the Arrow DVD restoration is the best we have now. Some could describe the film as “talky” or “slow,” but I think Romero’s ideas and intentions were ahead of his time. The pacing didn't bother me at all. Using witchcraft as just one facet of the plot, Romero creates an atmospheric and dreamy women’s story that would later be explored regularly in movies, books, magazines, television, newspapers, etc. In fact, this film reminded me of some of the readings assigned during a course I took in college where we explored the roles, expectations, and pressures of women throughout the 20th century. Again, I long for certain aspects of the past but NEVER for the designs of relationships or gender roles. Makes me feel sick just thinking about it! Witchcraft does sound like a more interesting option vs. being trapped in a loveless, unemotional relationship.

The Sentinel was truly a shock for me. I hadn’t really heard of it, but Patrick pulled it from our shelves one night after I described a few movie elements -- or really just ‘a feel’’ -- that I was in the mood for. As I recently wrote in my love letter to Martin Balsam: “Not only did this movie work for me on every level (New York, seventies, modeling, Beverly D’Angelo, strange gatherings of peculiar-acting characters, giant book shelves, ghosts, weird sex stuff, other sex stuff, Jerry Orbach…), but it features a scene with MARTIN BALSAM!” I really loved this movie and could see it working as a double feature with Season of the Witch in terms of how it explores gender roles and expectations in the '70s.

Near Dark and The Fog are so different in subject matter, but both feature creepily atmospheric qualities that pulled me in from the start. Near Dark feels timeless and distinctive on its own but especially as a vampire movie. I love Katheryn Bigelow and am so happy to have finally seen this. It was worth the wait -- and worthy of the hype. The Fog absolutely floored me -- I was immediately hooked by the feel, the naturalism (despite being a ghost story), and Adrienne Barbeau's confident performance. Sign me up for a Debra Hill t-shirt.

I asked Patrick if he could briefly describe me watching The Thing for the first “real” time. He said, “It was the best. Knowing where all the jumps are and being able to anticipate your reactions was a blast, but even more fun were your audible reactions to the crazy shit Rob Bottin came up with for the Thing effects. Hearing you say ‘WHAT?!?’ is, I'm guessing, exactly what he had hoped for when the movie was made back in 1982. If any of you have the means of watching The Thing with Erika for her first time, I highly recommend it.”

I can’t say anything better than that! 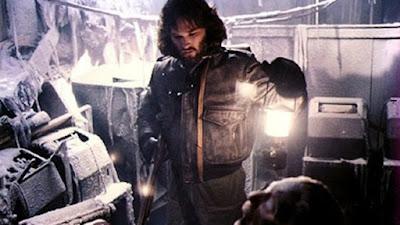 If you’ve made it this far, I’d love to hear from you in the comments. Have you seen all of these already, or was I not alone in having a few major horror blind spots? What is one of your horror blinds spots currently? The good news is, as movie lovers, we don’t have to wait till next October to remedy them. We love all kinds of movies all year long. #kiss
Posted by Patrick Bromley at 5:00 AM

Email ThisBlogThis!Share to TwitterShare to FacebookShare to Pinterest
Labels: 2019 scary movie month, chopping mall, dawn of the dead, near dark, season of the witch, texas chainsaw massacre part 2, the fog, the sentinel, the thing