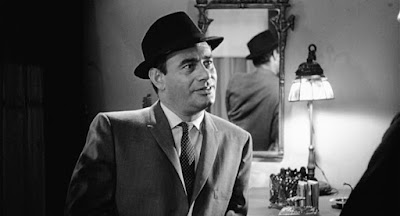 “My name is Arbogast, friend. I’m a private investigator.”

Psycho opened in 1960 to much fanfare and success, and it seemed audiences entered theaters for Janet Leigh (and/or the Wiliam Castle inspired Alfred Hitchcock “marketing party” -- can I make that a phrase? -- and spectacle) and left talking about Norman Bates (see what I did there). Both Leigh and Anthony Perkins (whom JB wrote a column about a few Octobers ago) give career-defining performances that truly remain with viewers long after the film ends. But I can’t help but also recognize Martin Balsam, who may only have a handful of scenes in the film but almost steals the movie for me. 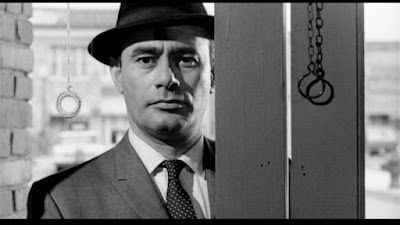 I don’t think I have to give much summary for anyone reading this. My guess is you’ve landed here because you love horror and/or are participating in #ScaryMovieMonth at F This Movie and/or are a regular visitor to our humble little site. But just in case: Martin Balsam plays Detective Arbogast in Psycho. He’s called to investigate the disappearance of Marion Crane and the $40,000 cash she didn’t deposit at the bank for her boss the past weekend. All that Lila Crane, Marion’s worried sister, and Sam Loomis, Marion’s concerned boyfriend (another small part John Gavin plays perfectly with so much sweetness and believability; he was in a ton of movies, but why wasn’t he a household name?) know is that Marion was supposed to deposit the money at the bank -- a large sum of cash she was trusted with by her understanding boss -- another tiny part featuring a seemingly decent man. (In fact, many of the male roles seem to feature decent men, which is kind of refreshing. Not everyone is out to get her; even the used car salesman tries to look out for her, suggesting it’s not the best idea to buy a used car without even a test drive.) She never deposited the money, was not seen by anyone in town (except for a quick moment of eye contact with her boss on the street as she was driving through), and never showed up to work on Monday, which was highly uncharacteristic for her. It’s not clear if Lila Crane simply does not trust the company’s investigation (history has shown that cases of missing women were often not taken seriously) but she seems to trust Arbogast, agrees to talk to him, and takes action in conjunction with his investigation.

It’s also refreshing that Arbogast takes the case very seriously from the start. He first tracks down Loomis, because (as history has also shown us), the significant other is often a factor in missing person cases. Loomis seems so confused about the situation initially, and I love that Arbogast’s intuition is quick; he senses there’s more to this disappearance than running away with a boyfriend -- or the boyfriend trying to steal money. When Arbogast says, “Well, with a little checking, I could get to believe you,” he’s so pleasant, casually leaning against the store counter and quietly securing their trust, and he gains the viewer’s trust, too. Arbogast sets out to retrace Marion’s steps as best as he can, leaving Lila and Sam with a solid, assured, “I’ll find her” before he leaves the store. 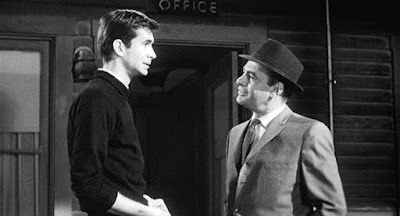 Arbogast finally arrives at the Bates Motel after a quick investigative montage, and he’s again cool, composed, and confident. Sure, many actors could have played this part, but there’s a believability to Balsam's face, his cadence, the look he gives when he’s intently listening to Norman’s stuttering responses. His eyes focus in a way that makes us as the audience take note of Norman’s changing characteristics. But it’s always so subtle, like Balsam understands how the camera captures him; he never tries too hard to fill the screen the way some actors do. Balsam isn’t playing a “movie detective”: nothing is flashy or loud, too big or too boisterous.

“Old habits die hard; it’s possible this girl could have registered under another name…”

When he calls Lila to tell her that Marion had been to the Bates Motel, Hitchcock does NOT have any shots of Lila on the other end -- it’s only Arbogast's side. His dialogue alone has to move the story forward, explaining his motivations and updating what he thinks might be a major clue for the case. Movies almost always cross-cut in scenes like this, but Hitchcock doesn’t here, so it’s all on Balsam, and again, he makes it easy and natural.

Because Balsam has the presence of a seasoned stage actor (his start came from television, but he did win a Tony in 1967 and an Academy Award two years prior for A Thousand Clowns, which was adapted from a play), he seems reliable and trustworthy. The audience believes anything he says and is immediately on his side. When he enters the Bates motel (without permission!), his facial expression quietly turns to less of a relaxed curiosity and more of a focused, ambitious curiosity -- something seems off, and he knows it, but he doesn’t have any answers yet. Then, when he enters the home to snoop around, he’s alone -- alone in a big house, responsible for using nothing but his “stage presence” to hold the audience’s attention/focus. Maybe it’s just great casting, so credit should go to Jere Henshaw (uncredited casting director). If they needed a natural, confident actor, Henshaw chose the perfect one. 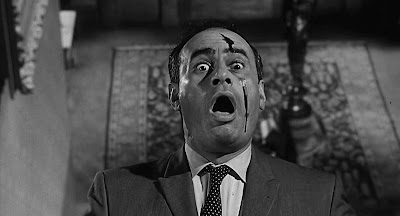 There is a quiet confidence in how Balsam plays Arbogast. He’s so believable that I want to hire him to help me with, well, just about anything. This quality grounds the viewer and brings extra realism to the story, which no doubt added to the tension and anxiety that Hitchcock’s audiences were feeling in 1960. Balsam’s performance seems effortless, and his looks, persona, and voice are timeless. You could pull him right out of Psycho and stick him in an episode of Law and Order: SVU as a serious detective or Brookyn Nine-Nine as a hilarious detective; he’d fit right in as an investigator in Zodiac or a journalist in Spotlight. This is at least how I always see him, and it’s why his small role always seems bigger to me.

Balsam isn’t given as much to do in Sidney Lumet’s masterpiece, Twelve Angry Men, yet I still notice him more than some other jurors despite his character not having any of the flashy monologues, feisty outbursts, or emotional close-ups. Patrick and I watched Breakfast at Tiffany’s for the first time last winter, and though I knew a lot about the film going in, I was not aware of Martin Balsam’s role; the surprise of seeing him had me beaming through all his scenes.

And earlier this #ScaryMovieMonth, after sharing a few movie characteristics for which I was in the mood, Patrick pulled The Sentinel from our shelves. Not only did this movie work for me on every level (New York, seventies, modeling, Beverly D’Angelo, strange gatherings of peculiar-acting characters, giant book shelves, ghosts, weird sex stuff, other sex stuff, Jerry Orbach…), but it features a scene with MARTIN BALSAM! I loudly shouted his name when it popped up in the opening credits (I’m all movie-watching class over here!), and though it is not a huge part, again, something about his cool consistency on screen had me hooked. He’s much older here than in Psycho obviously, but it is his natural presence and ease of performance that captivated me once more.

A common phrase during any theater production is, “There are no small parts, only small actors.” I don’t know how professional actors feel about this idiom, but I do know that an actor can absolutely make a difference in even the smallest of roles. Martin Balsam always did, never more than in Psycho.
Posted by Patrick Bromley at 5:00 AM