Hey there F-heads! If you’re just coming into this, I suggest checking out our previous column first, here.

Part 2: The Knight Before Christmas 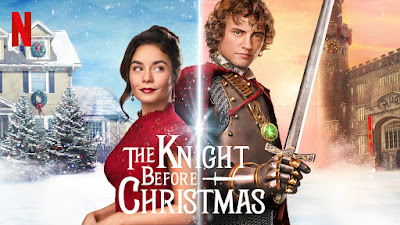 Alison: With my first venture of introducing Adam to the charm of holiday movies being a complete and utter bomb, this next movie had to come through in a big way. The Knight Before Christmas, starring Vanessa Hudgens, felt like my only safe option. Hudgens’s previous Christmas film, The Princess Switch, was pure holiday gold and my favorite from all the loads of Christmas movies that came out last year. So after seeing the previews for The Knight Before Christmas, it looked like we had a winner!

Hudgens plays a high school teacher whose salary allows her the freedom to purchase one beautiful holiday outfit after another all the while paying the mortgage for a house that comes with its own guest house. Unfortunately, Hudgens’s luck stops there. An unfaithful boyfriend has left her scornful, bitter, and afraid to love again. Hudgens befriends a young man claiming to be a knight from the 14th century. Even when all the people around her see the spark of romance between them, Hudgens has a hard time lowering her guard and allowing the flames of love to kindle. I know most of you checked out reading that brief synopsis, but it’s not about the plot! 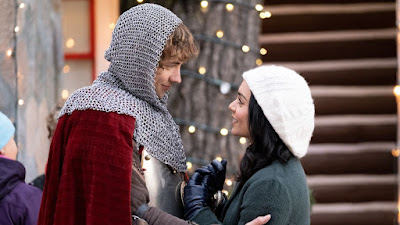 I’ve watched enough movies to know that The Knight Before Christmas is not a great movie, but it contains enough charm to make it worthwhile. Josh Whitehouse’s Sir Cole is the right amount of goofy and handsome. Hudgens’s outfits alone also make it worth a watch if you need some inspiration this holiday season. The jilted love plot line, while done many times before, gives the movie a pretty steady trajectory that feels just right. The holiday decorations are on point – especially the town’s square that looks a bit like Christkindlmarket, minus the crazy crowds. The film feels light and airy, and if I cry it’s probably because of its happy ending. There is an art to these movies, and The Knight Before Christmas gets it. This is it. This is what I want out of a Christmas movie: the romance, the snow, the music, the awkward glances where they almost kiss only to be interrupted. Here it is!

Adam: I’m not sure if Alison did this on purpose or not, but I’m enjoying this movie a lot more than the last one. Of course it also feels better to be kicked in the leg after you’ve been kicked in the nuts. I have to admit seeing the previews for this one, I was actually more excited for Holiday in the Wild, so I was not looking forward to this but there are things to like. Hudgens and Whitehouse have this thing called “chemistry” that Rob Lowe and Kristin Davis spent 85 minutes not finding. 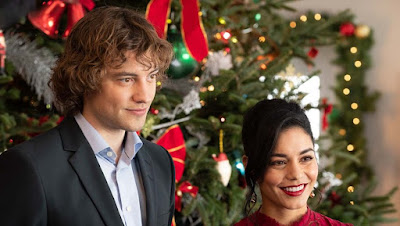 While having a conversation with fellow F This Movie! contributor Mike Pomaro, I told him I was watching The Knight Before Christmas and without hesitation he said “I promise you they started with that title and worked backwards.” After watching the movie myself, I can tell you wholeheartedly that that is indeed the case. It's produced by and starring Vanessa Hudgens as a science teacher who has recently gone through a break up and is trying to make it through a difficult holiday season being single. Meanwhile…. Or sometime…. How does one talk about time travel when explaining a plot? I’m already confused. Okay, so back in 1300s England, Sir Cole travels to the forest where he is kind to a strange woman, who in return sends him to 2019 US, where he is promptly hit by Brooke’s car. Now, I’m writing this spoiler free, but chances are if you’re reading this you’re an avid movie watcher, so I want you to close your eyes and just imagine what you think is going to happen with the rest of this movie’s plot. That’s exactly what happens.

When doing a deep dive into The Knight Before Christmas, it’s nearly impossible to be critical of it because it delivers what it promises. It’s heartwarming and pleasant, and you can easily watch it with the family or put it on in the background while setting up Christmas decorations. It’s competently made and everyone involved with the movie knows what they’re doing so that a giant mess doesn’t wind up on the screen. It sticks to the formula that allows Hudgens, the new queen of Christmas movies, to do what she does.

Even though the movie itself is far from a train wreck, I feel I wouldn’t be doing my duty for the site, Patrick, or to you, dear reader, if I didn’t point out my two biggest issues with the movie. The first isn’t really an issue, just more of advice. Ladies, if you at any point hit a man dressed as a knight with your car and after he wakes up claims to be a time traveler from 1300s England, I don’t care how cute he is or how much you believe in magic, you probably shouldn’t take him home with you. 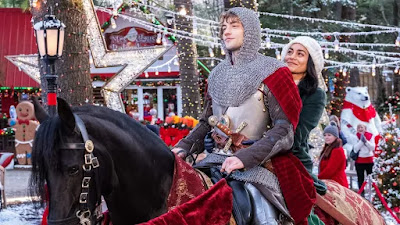 Besides all of the odd plot points and decisions, the second is something that sticks with me that I cannot shake. The knight’s name is Cole and, being a knight, he is addressed on multiple occasions as “Sir Cole.” I want you to say that name out loud: “Sir Cole.”

The guy’s name is “Circle” and not a single person in the movie addresses it, makes a joke about, or even snickers at it. I spent the entire movie waiting for the fact that his name is “Circle” to have some dumb double meaning about life and time travel, but it never came. I am endlessly fascinated that out of the hundreds and probably thousands of people involved in the writing and filming of this movie, no one said anything.
Posted by Patrick Bromley at 5:00 AM