Alison: Adam and I came across this movie quite by accident. We had initially started watching Holly Star, but when the movie’s protagonist claimed she had witnessed Santa Claus involved in a homicide, Adam and I both realized this movie was not for us! A quick search on Netflix uncovered The Holiday Calendar. 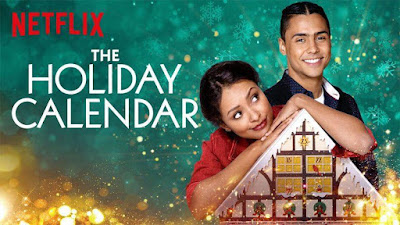 Abby is a photographer with big dreams. Josh, her childhood best friend, returns home from his successful career as a freelance photographer. When Abby’s grandfather questions why the two of them aren’t in a romantic relationship within the first few minutes of the movie, I did a silent dance of joy. Childhood friends turned sweethearts is the stuff of holiday movie genius!

Abby is gifted an antique Advent calendar belonging to her grandmother. From Day One, the calendar seems magical. Each night at midnight, the day’s door opens to reveal a small figurine. Abby quickly realizes that the figurine somehow connects to the events of her day. Through the magic of the calendar, Abby meets and falls for the town’s most eligible bachelor, Ty. But what about Josh? Will the calendar bring these two together once and for all?

While the movie has a fairly predictable plot, especially with the love triangle (more holiday movie genius!), the magical Advent calendar spiced this movie up. At first, Abby (and I) couldn’t wait to see what the calendar revealed. But as some unfortunate events begin to occur, Abby grows resentful of the calendar and the hope it had awakened within her. The calendar itself doesn’t drive any of the plot points, but I appreciated the magical element it brought to the story. Personally, I love trying to predict how movies are going to turn out. Having little clues sprinkled throughout the movie only made the viewing that much more fun for me! 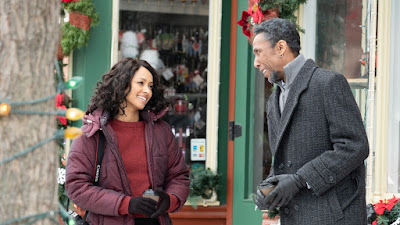 Adam: Well, out of the three we’ve watched so far, this one is by far the most interesting, mostly because it’s the one I’m most divided on. Let’s start out with the good. This is an incredibly diverse cast, both racial and age wise. A lot of these movies can be summed up as “White people fall in love during Christmas,” but this one completely breaks that. The main character, Abby (Kat Graham), is the product of a mixed marriage. Just about every major character is a minority, and I think it’s not only breaking a trope found in many of these movies, but it’s something nice to see in general. Throughout the movie, no one is made to seem clownish and everyone is taken seriously, from the youngest to the oldest in the cast. Probably the nicest part of the movie is the relationship between Abby and her grandfather that seems genuine and respectful. So in terms of the bigger picture and what this movie represents in the genre that I’ve stumbled into, this one is the best. 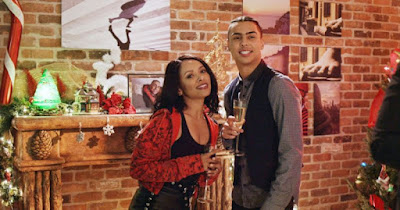 Before I can explain the bad, I want to say I had fun with this one. Kat Graham and Quincy Brown were fun to watch in the lead roles, and it has enough charm that I enjoyed parts of it. Now for the bad. There are a few bad things, but my biggest gripe has to do with the movie's namesake: a holiday calendar that Abby’s grandfather gifts her. This particular holiday calendar provides a small toy for each day, that small toy then accurately predicts Abby’s future for that day. That is the greatest gift ever! Imagine if you had a gift that could predict the future? The amazing things you could do, the things that you could be in control of.

That’s the thing, though. Her ability to see the future never plays a part in this movie at all. For the first couple times when she doesn’t really know what’s going on, we can excuse it; the calendar pops out mini ice skates, she finds herself on ice that day. Soon, though, once Abby figures it out the entire movie becomes "calendar pops out a tiny toy, and the next scene is us watching how that toy relates to that scene’s events."  At no point does she try and change the future, use it to her advantage, nothing. The calendar has absolutely nothing to do with the outcome of the movie! Towards the end, Abby stops looking at the calendar completely. It’s just insane to me that you have such a major plot point and it has nothing to do with the plot or the outcome. It’s like if Star Trek was about Spock, Bones, and Kirk opening a boutique in New Jersey and they just happen to be into Astronomy…. Okay, I’d still watch that, but you get my point.
Posted by Patrick Bromley at 12:00 PM