My experience with the new movie version of Andrew Lloyd Weber’s Cats should be reason alone for me to delete and ignore the Twitter machine forever.

The buzz on the Twitter machine about the movie version of Cats was one of disbelief and derision ever since that creepy trailer was released last July. Reports after the film opened claimed that Cats was released before the special effects were quite finished; these rumors were bolstered by the news that Universal Studios made a new DCP of the film available to theatres via satellite the Tuesday after it opened. Audience members claimed that James Corden’s arms mysteriously disappeared in one shot and that Dame Judy Dench’s left hand was without a CGI makeover, revealing her wedding ring.

Granted, I saw the film after the ignominious “Tuesday changeover,” but the reports of unfinished special effects seem overblown. Sure, the “catification” of the actors is creepy as hell, but Dench’s own hands with ring appear in every shot. Many of the actors have wholly human hands and feet. They just do. And it’s fine. And a little creepy. Okay, a whole lot of creepy. 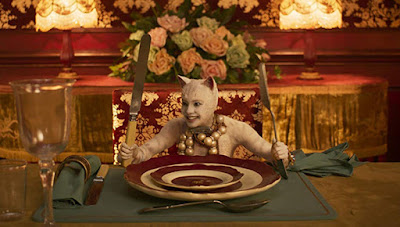 Cats and I go way back. I saw the original Broadway production on my honeymoon in 1987. That feline fête at the Winter Garden Theater left me scratching my head. THIS was what everyone was praising? THIS wound up being one of the longest-running Broadway musicals in history? The whole thing seemed a little twee and a little… slight. Perhaps if I had read Andrew Lloyd Weber’s source material, T.S. Eliot’s Old Possum’s Book of Practical Cats, I would have been better prepared for a show that more resembles a revue. Kitties are introduced, they sing about themselves, and then it is on to the next. I was bothered back then by the lack of story. That’s why I thought it was interesting that the commercials for the new film version begin by explaining the plot: These cats are all in a competition for who gets to be reincarnated and live a new life!

When Sarah Jane wrote an article last week about her audience seemingly attending the film just to laugh at it, I knew I had to see it, though I was originally planning on giving this film a pass. I needed to remind myself that I was the one person here at F This Move! (beside Erika and Rosie) who loves musicals. So I needed to find out: Was this film really a… cat-astrophe? (#kittyhumor) 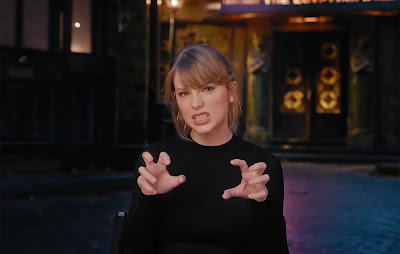 Lots of people—including many otherwise die-hard film fans—have problems with musicals. I experienced this distaste often during my decades teaching a high school film studies class. Back in 2014, I talked about this unfortunate phenomenon in a column about the 1933 Warner Brothers’ musical 42nd Street. I wrote,

“Many of my students have but one purpose for going to movies and a single criterion by which to judge their relative merits. These kids go to movies to see a story; they want to know ‘how it ends.’ Their sole criterion is ‘realism’—that is, how ‘realistic’ it seemed. It's a strange goal, given that film is an art form that generally hides its own artifice with a gloss of professional competence that we've merely named ‘realism.’

“Like all art, movies are a gigantic lie, an artifice manufactured to reveal a larger truth. Some of my students simply cannot see past the artifice. They want to go to the movies, quickly suspend their disbelief, and spend the remaining 90 minutes pretending that they are watching reality, though it is surely a more entertaining reality than the rather drab reality they are actually experiencing outside the theater.

“Musicals hold up a serious middle finger to these notions of ‘story’ and ‘realism.’ They are largely unconcerned with plot. Musicals make no secret of the fact that plot is mere contrivance, a laundry line on which to hang musical numbers. Also, if viewers are simply at the movies to enjoy the narrative, then musicals must be a frustrating experience because during the average musical, the narrative stops dead every ten minutes so that people might sing and dance: Glorious if you like that sort of thing, frustrating if you don't.”

Beyond the overblown pre-release hype and the creepy CGI, I think this is the reason audiences seem to be allergic to Cats (#kittyhumor). Yet watching the film one recent morning (at an 8:30 am screening!) revealed a lot to like. Yes, Cats is a mess, but it’s not a complete train wreck. There are moments of entertainment and fun that point to what the film could have been. I still think an animated cartoon version, which was actually discussed at one point in this property’s development hell, would have been a better way to adapt this material.

The choreography by Andy Blankenbuehler is astounding and delicious, but it is completely ruined by director Tom Hooper’s choice of shots and editor Melanie Oliver’s frenetic cutting style. The dance pieces are poorly framed and we seldom see any single shot long enough to take it all in. The few times a single shot in a dance number lasted longer than four seconds, I was amazed and impressed by the intricacy and syncopation of the movement on screen. Say what you want about Sydney Lumet’s direction of The Wiz (a film also based on a Broadway sensation)—but at least Lumet had the brains to occasionally lock down his camera and thrill the audience with a wide-angle shot that showed off the choreography. In Cats, Hooper and Oliver seem like they hate dance and hate this choreographer and designed a film specifically to ruin his reputation. It’s a shame. Maybe audiences would enjoy and appreciate the dances in this film if THEY WERE ACTUALLY ALLOWED TO SEE THEM.

Halfway through Cats, Sir Ian McKellen shows up as Gus, the Theater Cat, and gives his fellow actors and the film’s audience a hugely entertaining five-minute tutorial on how to tailor your performance to the material and how to steal the show. McKellen’s number provides insight into what this film could have been if every musical number had been given such special treatment… or if every musical performance had been cast with an actor of McKellen’s talents.

Similarly, Danny Collins and Naoimh Morgan’s performances as Mungojerrie and Rumpleteazer, respectively, point to a very different Cats. Their number is playful, beautifully sung and danced, and doesn’t overstay its welcome. (Would that I could say the same thing about the shticky, embarrassing performances from James Corden and Rebel Wilson… but the less said about them, the better.) I’m guessing Collins and Morgan are stage performers, but they nicely adjust their performing styles to the big screen. Their musical number, about families who blame all bad occurrences on house pets and move on, is a five-minute oasis in an entertainment desert.

I also enjoyed the new song written especially for the film by Taylor Swift and Andrew Lloyd Weber, “Beautiful Ghosts,” which is sung in the film by newcomer Francesca Hayward. The song is very beautiful and sad. Stick around during the end credits if you would like to hear Ms. Swift sing it too. Speaking of beautiful and sad, I also liked Jennifer Hudson’s performance of the show’s big hit song “Memory,” but I was distracted by the fact that Hooper shoots her in close-up for minutes at a time… and by the fact that Hudson had all of that CGI cat makeup shit on her face. 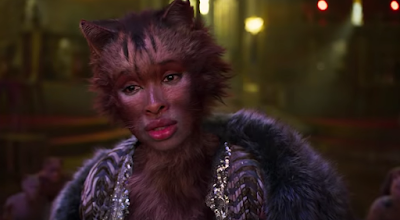 I recognize that a scattered (or should I say… “cat-tered?” #kittyhumor) 15 minutes of unfettered fun in a 110-minute film may not be enough to sustain most viewers. Yes, all of the nonsense with Macavity the Mystery Cat kidnapping the other cats was added for the movie version and doesn’t work. Yes, all of the material aboard the boat (“Wait a minute!” shouts a reader familiar with the original Broadway show, “I don’t remember A BOAT!” Exactly.) is forced, awful padding… or worse, an attempt to “open up” a single set stage piece. Yes, you will fall asleep at one point in the film or another. Yet before I ventured forth to actually see it, the Twitter machine had me convinced that Cats was the worst movie ever made, an embarrassing spectacle in which every aspect of production was either mishandled or misconceived.

You have to search and search through this litter box, but you will eventually find something of value. Meow!
Posted by Patrick Bromley at 5:00 AM