After loudly deriding Scream Factory for holding this tasty release until late November, instead of putting it out before Halloween, I didn’t get around to watching it until December. I should be very careful at whom I point my finger in the future. 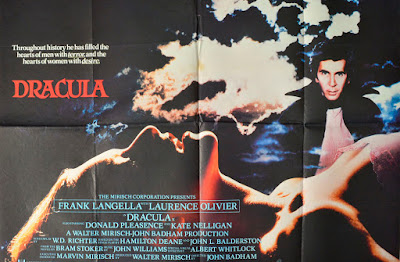 I call this movie “the Frank Langella Dracula” because it is very much Frank Langella’s Dracula. The 1977 Broadway production, designed by illustrator Edward Gorey and starring Langella, had been a sensation and a money machine; it even won the Tony Award for “Best Revival.” The play’s success is why Universal Pictures threw its corporate hat back into the monster ring and bankrolled this lavish, expensive film. They wanted to be in the Frank Langella business. Langella’s contract, it is rumored, gave him unparalleled approval over all aspects of the production: Langella was not required to wear, say, or appear with or in front of ANYTHING that didn’t meet his approval.

I give Scream Factory so much love and credit for its restoration of the color version of this film. Though I swear I haven’t seen this Dracula since its opening day in movie theaters when I was seventeen, it seems the only version commercially available on video since the 1981 VHS tape was a director-approved “de-saturated” version, which drained the colors out to yield what was practically a black and white film. Supposedly, director John Badham wanted this version to play theatrically too, but a skittish Universal Pictures refused. The bottom line is that the color version hasn’t been seen in almost forty years. This is ironic because, though I usually prefer monochrome, here I really love the color version and think it looks marvelous. Scream Factory provides both versions here—one on each disc—so both camps can have their (bloody, delicious) cake and eat it too!

Watching Dracula after such a long gap, I was surprised that I enjoyed it so much. At the time of its original release, I remember being lukewarm about the film. With two glaring exceptions that I’ll discuss in a bit, the film holds up very well: the locations, sets, costumes, performances, and script are all first-rate. Purists might object to some of the liberties taken with the vampire tale (and some of the shuffling and repositioning of famous scenes and even character names!) but this is a solid take on Dracula that does ten interesting things right for its every misstep. Langella is wonderful, having played the part on stage almost 500 times. Sir Lawrence Olivier is a solid, if unconventional, Van Helsing. His strange choice of accent aside, his reaction to one of the character’s deaths is the single most affecting piece of acting in the film. Kate Nelligan is a fine Lucy and Jan Francis is a scary Mina. (You read that right: screenwriter W.D. Richter switched the two character’s names. This causes no end of confusion to those die-hard Dracula buffs that are used to the characters’ names the other way around.) Donald Pleasence is welcome comic relief as Dr. Seward. Tony Haygarth is an interesting Renfield. It’s all good. 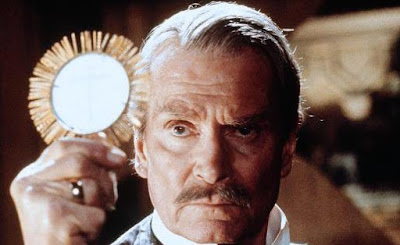 My only objections to the film are two scenes that should have been left on the cutting room floor in 1979. Both scenes stick out like a pricked, bleeding thumb, but this could be only the benefit of hindsight; maybe in 1979, these scenes were “state of the art” (Though if so…. Yikes.)

The first scene in question is Dracula’s seduction of Mina… sorry, Lucy. (I told you this gets confusing… because of course he seduces Mina too!) I’m not talking about the famous scene that appears in the book (and most movie versions) where our Count opens a vein for his intended. No, this is something special that appears only in the Frank Langella Dracula: an old-fashioned, flesh-and-blood, kissy-kissy, romantic love scene. (Die-hard Dracula fans, you may discuss this directorial decision amongst yourselves!)

So here’s how this weirdness goes down: Dracula and Mina… sorry, LUCY… start kissing, the camera tilts on its side, the background drops away, and our two lovers are bathed in… piercing laser light beams that form shimmering, throbbing, blood red clouds above and below their writhing figures. Although the movie is set in 1913, the red-cloud effect is not unlike a late-1970s rock concert—and with good reason. The filmmakers borrowed the lasers from The Who, and they appear in the Who documentary The Kids are Alright when the band plays “Won’t Get Fooled Again” and lead singer Roger Daltry steps into the awesome laser light and undulates his shoulders like a golden-tressed rock god. At a Who concert, this effect may remind you that you are pleasantly stoned. In Dracula, these laser effects are so laugh-out-loud funny, so dated, and so hopelessly faddish, that they almost sink the whole enterprise under their very weight. Unfortunate. 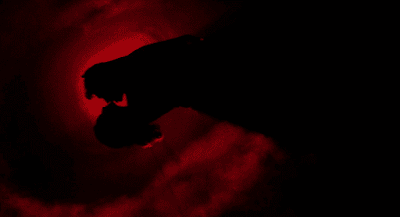 As for the other risible scene, I’m going to leave that to my faithful readers to determine on their own. You will know it when you get to it. I won’t spoil it for you… but it involves a kite.

Constantine Nasr provides the audio commentary on Scream Factory’s new color version of the film, and it stands as one of my favorite commentary tracks of the year. Nassr wrote the definitive history of the film’s production for Little Shop of Horrors magazine in 2016. That piece ran more than 100 pages. It is safe to say that Nassr is the world’s expert on this film; it’s also one of his favorites and his enthusiasm informs the track. I learned the complete production history of the film. I also learned about the neat “actor’s trick” that Donald Pleasence used because he realized he had to share the screen with both Broadway star Langella and Greatest-Actor-Of-All-Time Olivier. Here’s the trick: Pleasence is shown eating in every scene. Whenever actors do that, editors take pains to make the continuity match and the actor ends up with more screen time. (This made me wonder if this were one on the reasons Brad Pitt is constantly eating in the remake of Ocean’s 11.)

If you’re a Dracula fan, a Dracula fan, or a Frank Langella fan (and if you’re not, you should be), you need to check out Frank Langella’s Dracula. Given the film itself, its two handsome presentations in this set, and the wealth of other extras here, this should be on every Monster Kid’s Christmas list. I’m about to sit down to the de-saturated version again. I can’t remember a recent disc purchase that gave me quite as much bang for my buck.

You may wish to purchase some optional lasers too.