I have returned from Hell-A, having made a pilgrimage that had been on my “To Do” list for far too long.

I just spent Thanksgiving week in California so that I could break bread with my son. (We did break bread, but later fixed it with some glue. Really, it was good as new.) On the last day of any trip, my lovely wife and I invariably wind up dealing with the “What Should We Do After We Check Out of the Hotel But Before We Catch a Cab to the Airport” conundrum. I am in the camp that argues for getting to the airport 12 hours before our flight JUST IN CASE SOMETHING UNEXPECTED CROPS UP. Clearly, I am insane. My wife, on the other hand, belongs to the group that shouts, “Real quick! Let’s hitch-hike to Malibu so we can swim in the ocean for three minutes before heading to the airport where we will wash the sand off our feet in a toilet before getting on the plane with thirty seconds left before take-off!” Clearly, she’s completely sane.

Luckily, my wife cajoled me out of my self-induced lobby coma, and we merrily Uber-ed to 923 Vendome Street to see the Laurel & Hardy “Music Box” steps. 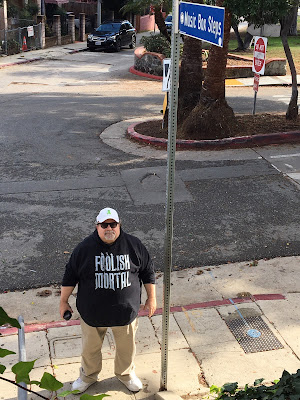 The Music Box is the 1932 Laurel and Hardy film that won the Oscar that year for “Best Short Subject.” In the film, our two clowns deliver a piano up an impossible flight of steps. What follows is twenty minutes of variations on a theme: the piano goes up, and then the piano comes down. If there are any teachers reading this who are charged with teaching young people the legend of Sisyphus (or find “Sisyphean” on a vocabulary list) you could do worse than show this film to your students.

The flight of steps still exists in the Silver Lake neighborhood, marked with a plaque and two street signs to assure curious movie lovers that they have arrived at the right spot. The staircase is crazy long and narrow. I am a substantial man of 57, and the thought of climbing the famous staircase frightened my heart, but if Oliver Hardy could do it (many, many times over the course of a few days) then I could do it too. 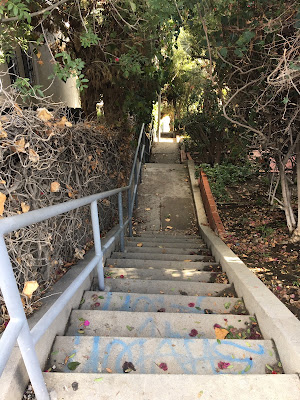 After much huffing and puffing and worried looks from my wife (She merrily skipped up the stairs two at a time, blithely taking pictures of me on her way up.) I made it to the top, where I felt rewarded by the sight of the second street sign and a major psychic sense of accomplishment. Then I realized that when Oliver Hardy went up and down these very same steps, he was only 39 years old and, believe it or not, weighed substantially less than me. Of course, he also smoked cigarettes with such fervor that his producer Hal Roach once described him as a “freight train smoke stack.” When he was my age, Oliver Hardy was only eight years away from his own death. So I guess everything considered, it’s about even. 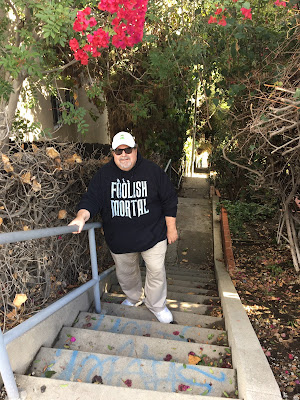 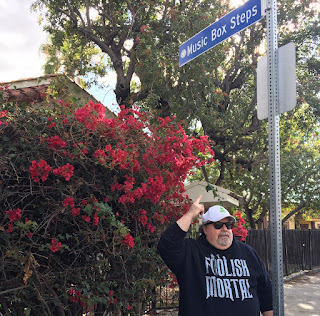 Climbing those steps certainly gave me a sense of respect for the sheer strength and endurance the two comedians needed to summon for their intensely physical comedies. For The Music Box, they had to run up and down 180 steps dozens of times AND be consistently funny while doing it. All I had to do to was not keel over from a cardiac arrest; I wasn’t trying to entertain anybody.

Once at the top of the stairs, I feel that the Gods of Classic Movie Comedy looked down on us from heaven and sent us a reward. Walking away from the steps from our new location up top, we quickly came to “All Day Baby,” a new diner on Sunset Boulevard that had just opened three days before. We stopped there for brunch. It wasn’t just comfort food; it was a religious experience. I resisted the temptation to purchase a homemade pie, one of their specialties, and to honor the spirit of Laurel and Hardy… by throwing it in the face of an unsuspecting customer.

Looking back, I kind of wish that I had. Perhaps on our next trip… 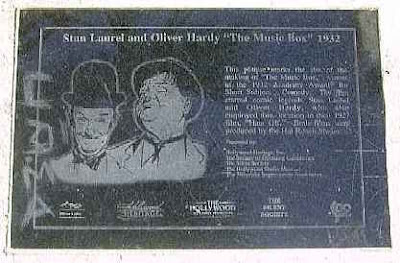 A year ago, reviewing the film Stan & Ollie, I wrote: “I am a rabid L & H fan. I come by it honestly. In the pre-VHS and pre-cable days of my misspent youth, I first developed a jones for motion pictures because my loving parents gifted me with a silent Super 8mm projector one Christmas. I would check out silent films from our local library and project them in our basement onto a hanging sheet. It was in that basement that I first fell in love with Laurel & Hardy, Charlie Chaplin, Buster Keaton, and Lon Chaney. I then discovered Blackhawk Films, a mail-order house out of Davenport, Iowa that actually sold silent Super 8mm films. Taking pity on twelve year-olds with small allowances, Blackhawk films featured a monthly special: a silent comedy two-reeler for the low, low, discount price of only $6.99. Three of the first films I ever purchased in 1975 were Laurel and Hardy in Double Whoopie, Wrong Again, and Big Business. I still think that Big Business is one of the most perfect comedy films ever made.

Because of rights issues, some Laurel and Hardy films have been notoriously difficult to see in this country. I own a few of my favorite silent shorts on DVDs that went out of print years ago [….] Typing ‘Laurel and Hardy’ into the YouTube search box reveals a treasure trove of the duo’s work, unhindered by pesky issues like ‘copyright’ and ‘ownership.’ I must admit that I am so old, stodgy, and set in my ways that it had never occurred to me to do this.”

Laurel & Hardy play their own children in Brats (1930)

It may seem trivial to those who don’t already love L&H, but I am so glad the Music Box Steps still exist, and that this movie location has been preserved and marked for future generations. As every movie lover knows, the present tends to bury the past. Laurel and Hardy are important artists of the early 20th century. Their work together was unique, influential, and still holds up today. If you’re a comedy fan not familiar with Laurel and Hardy, you owe it to yourself to check out the links above.

Through this site, I’ve heard from film fans that have shown these films, and others like them, to their kids—and the kids are invariably delighted. This makes me very happy… as happy as climbing those 180 steps.
Posted by Patrick Bromley at 5:00 AM