Boys with Toys: The Juvenile Jingoism of JOJO RABBIT 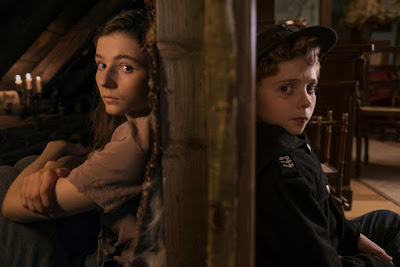 Taika Waititi’s Nazi romp gives us permission to learn from our mistakes.

Few feelings in life match the exhilaration of total certainty. The calm, centering force assures us that we know best and that everyone who opposes us is wrong. Our clarity lets us walk a little taller. It puts a little extra pep in our step. We even pity our detractors, in a way; we feel endowed by our creators with a mystical sixth sense that allows us to stand above these poor, unfortunate souls. “They just can’t see what I see,” we tell ourselves. “They don’t know any better.” And while there are certainly social and philosophical arenas in which science, scholarship, and natural laws provide definitive answers to complex questions, none of those figures or equations feels quite as good as Following Our Gut. It’s ethereal. It’s spiritual. It makes us superhuman. It gives our pursuits meaning and shapes their purpose. “It’s better to die for something than to live for nothing,” says General Patton. In these instances — when we’re blindly, perhaps fatally committed — that we shift from holding knowledge to practicing belief. 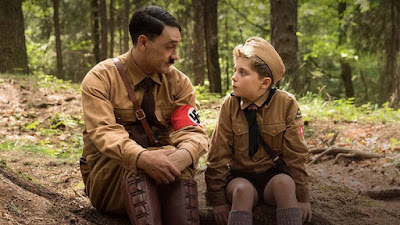 Of course, the irony is that “beliefs” are more malleable than knowledge, and once we start believing something, we close our minds off to the possibility that it may not be correct. The belief becomes part of who we are, and once it’s that ingrained in our identity, it becomes hard to shake off. We build walls around it and cherry pick information that supports it while rejecting everything else. With enough time (and enough walls), we become cold and detached. We lose our ability to empathize and take in new information. Take Jojo Betzler (Roman Griffin Davis), for example. The ten-year-old German boy is so convinced by the rhetoric of the National Socialist Party that he’s enlisted with the Hitler Youth and befriended an imaginary version of the Fuhrer, himself (Taika Waititi). Imaginary Hitler pushes him to be his best (“Heil! Come on, Heil! You call that a Heil?”) and reinforces his belief that it is a man’s duty to fight and die for his country in glorious battle.

Does Jojo really have that much hate in his heart? Does he really believe that non-Aryans are a scourge to be eradicated and that a militarized Germany is the key to his happiness? Of course not. Jojo is simply at a vulnerable time in his life, and he sees the certainty of the Nazis as a stabilizing force that will grant him strength and clarity. Jojo, it seems, is in desperate need of both: His father is fighting in Italy. His sister has recently died. Only his mother (Scarlett Johansson as Rosie) remains, and her fierce opposition to the war effort offers Jojo no support. Rosie believes in peace, in beauty. She wants to dance to life’s music. She wants to see her town squares full of lovers, not soldiers. “Love is the strongest thing in the world,” Rosie tells him. “Metal is the strongest thing in the world,” Jojo retorts, “followed closely by dynamite and then muscles.” Rosie is weak, he thinks. Passive. Captain Klenzendorf (Sam Rockwell), on the other hand, can give Jojo strength, metal, and muscles. He can teach Jojo to march and shoot and blow things up. He can help Jojo wreak the same destruction upon the fragile world as it has wreaked upon him. 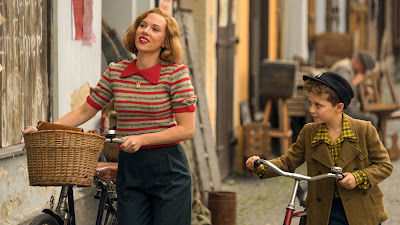 This fervor intensifies after a self-inflicted injury renders Jojo unfit to serve. Only days later, he learns that Rosie has been hiding a Jewish girl (Thomasin McKenzie as Elsa) in their home. Not only can he not fight, but now he has to share food and living space with his enemy? These are beyond simple indignities; they’re a refutation of his entire identity. He resolves to dig deeper, to interrogate this Jewish girl for information about her people, their habits, and their weaknesses. But talking to Elsa proves difficult for the young boy. She’s beautiful. Intelligent. Challenging. “Don’t let her put you in a brain prison,” Hitler tells Jojo. “That is one thing that cannot happen to a German!” Before long, though, butterflies erupt in Jojo’s stomach. He finds himself talking to Elsa, telling her his fears and needs and hiding her from the Gestapo. He sees Captain K (himself broken and emasculated by injury) protect Elsa’s secret and sacrifice himself for Jojo’s soul. He sees the poverty that war has brought to his neighbors. He sees his mother hanging from the gallows for treason. “Free Germany,” her pamphlets read. 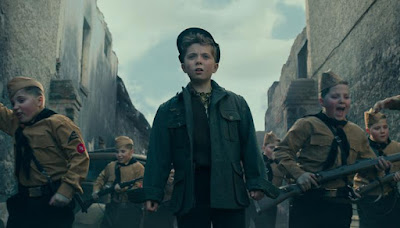 “You’re not a Nazi, Jojo. You’re a ten-year-old kid who likes Swastikas and likes dressing up in a fancy uniform and wants to be part of a club. But you’re not one of them. Not you.” Not the boy who earned his nickname by refusing to murder a defenseless rabbit. Not the boy who wrote Elsa comforting letters from Nathan, the boyfriend he didn’t know was already long deceased. Not the boy who tied his dead mother’s shoelaces and kicked Imaginary Hitler out of a second-story window. Jojo is not a Nazi. He’s a lost little kid looking for comfort and friendship. And that, Waititi assures us, is okay. That’s the point. That’s growing up. That’s pulling down our walls and changing our minds. That’s Jojo and Elsa tip-toeing out of the house and into a liberated Germany, dancing to Bowie’s “Heroes” in celebration of love’s victory over fear. “Let everything happen to you,” says Rilke’s “Go To the Limits of Your Longing.” “Beauty and terror. Just keep going. No feeling is final.”
Posted by Patrick Bromley at 5:00 AM