Does anyone remember this terrific 1991 musical picture?

A few weeks ago, I realized that Alan Parker’s The Commitments became available on Blu-ray disc in 2016, and I had not noticed! I rectified my Commitments-less situation with the help of a handy Amazon gift card, and eagerly spun the disc. Would the film hold up to my fond memories of almost 30 years ago… or would the dreaded “Goonies Derivation™” kick in and boot my nostalgic evening to the curb? 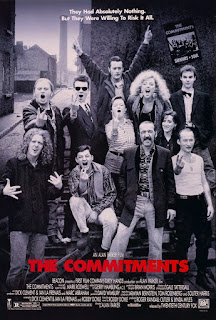 The Plot in Brief: Young Dubliner Jimmy Rabbitte (Robert Arkins), bored by his stagnant life of abject poverty, decides to put a soul band together and act as its manager. With two friends poached from a wedding band going nowhere (Derek Scully and Outspan Foster, played by Ken McCluskey and Glen Hansard, respectively); plus local bus driver Deco Cuffe (Andrew Strong), who was so drunk he doesn’t even remember getting up and singing at that band’s recent gig, Jimmy is on his way. His ad in the local newspaper brings professional session musician Joey “The Lips” Fagan (Johnny Murphy) to Jimmy’s door. Fagan has played with the great and near-great and helps Jimmy put together the rest of the band. “The Commitments,” as Joey dubs the group, get better and better the more they rehearse, but infighting and personal grievances threaten to break them up.

I love this movie so fooking much, and I don’t say that lightly. Director Parker allowed the young cast to improvise freely during takes, and it resulted in a film that, in 1991, toppled Raging Bull from its throne as “Major Studio Film With The Most F-Bombs.” In an interview included with the disc’s special features, Parker seems perversely proud of that. Parker also filmed all of the vocals live, which lends an immediacy and energy to the performance scenes, but posed serious problems to his cinematographer and editor. The editor found it hard to match footage from different live takes, and the cinematographer found that because Parker shot all the close-ups first, he had to light them so that they would match the establishing shots that had not yet ben lit or filmed. The whole thing represented a kind of audio-visual jigsaw puzzle. 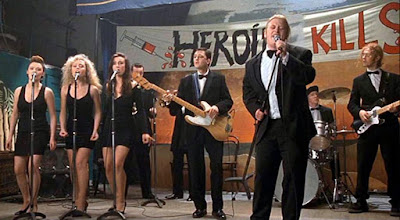 Alan Parker also has an eye for talent:

• Before the role of Deco was cast, Parker hired Irish soul singer Rob Strong to accompany the band members in pre-production rehearsals; Rob’s son Andrew often tagged along. One day his father’s voice was off, so Andrew took over—and Parker gave him the role. After The Commitments’ soundtrack album sold more than 14 million copies worldwide, RCA signed Andrew to a million-dollar recording contract.

• Glen Hansard, who plays the delightfully-monikered Outspan Foster, fronted the Irish rock band The Frames. In 2007 Hansard both starred in and wrote the music for the film Once, and his song “Falling Slowly” won the Oscar that year for Best Song. Once was also turned into a popular Broadway musical; “Falling Slowly” is still a popular song choice among American Idol contestants. (Once was named the 49th Best Film Ever by our very own Pope of Film.)

• Maria Doyle Kennedy, who plays Natalie Murphy in the film, went on to a 30-year television and music career; she has appeared in Downton Abbey and the film Sing Street.

• Andrea Corr, who has a small part as Jimmy’s sister Sharon, later formed the immensely popular Irish folk band The Corrs with her sisters.

The Commitments was the first film for all four of these performers. It’s a little like the Irish Outsiders (when with one film Francis Ford Coppola “discovered” Tom Cruise, Matt Dillon, Rob Lowe, Patrick Swayze, Ralph Macchio, Emilio Estevez, and C. Thomas Howell.) 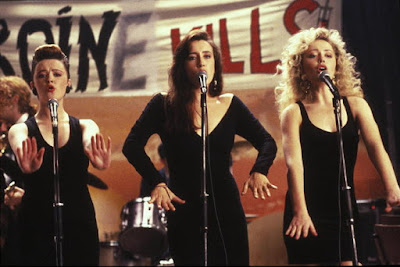 There was talk of the actors touring as The Commitments after the film was released, but that never happened. The special features on the Blu-ray include both the “Ten Years Later” featurettes from the 2003 DVD release and newer “Twenty-Five Years Later” featurettes that are exclusive to the 2016 release. Poring over these interviews and artifacts, it’s not difficult to see how ego, money, and jealous infighting crushed the real-life Commitments just as they did their fictional counterpart. I would love to see a full-length, theatrically-released film—here I’m thinking about something like the terrific Dolemite is My Name—about the making of this film and its disappointing aftermath. It’s a very common tale… 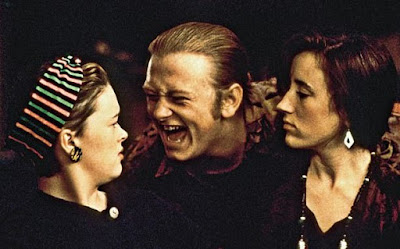 The Commitments has great music and big laughs. The audition scene has become a mini-classic, if measured by sheer number of people who have posted it to the YouTube machine. The Commitments has become a holiday classic in Ireland, where it is shown on television every Christmas Eve. The original soundtrack was a sensation, going multi-platinum around the world. (Sigh. Remember when people bought CDs? Remember when people bought music? Remember people?) The Commitments also falls into the loose, beloved genre of “Characters Gather To Make Art,” which also includes That Thing You Do!, Ed Wood, Shakespeare In Love, Bowfinger, and the previously-mentioned Dolemite is My Name. In fact, That Thing You Do!, released only five years after The Commitments, covers much of the same ground and, at times, almost seems like a skewed American remake.

For now, enjoy The Commitments’ performance of “Mustang Sally” from the film. Yes, that is Colm Meany in the audience; he plays Jimmy’s Elvis-loving father in the film.