Come stream with me. 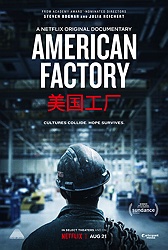 American Factory (dir. Julia Reichert, Steven Bognar) I've been saying it for about as long as anyone would listen, but the Academy Awards are kind of a joke. Between last year's winners and this year's nominees, it feels like people are maybe coming around to this idea. (Of course you should still dig them if you dig them. It's always good to find things you enjoy!) One nomination they got right this year is American Factory, one of the best documentaries I saw in 2019. It focuses on a closed factory in Ohio that reopens when a Chinese company buys it and moves a bunch of its workforce in, all while still intending to run an American company. The movie has so much to say about labor, about culture, about our ability to coexist, always in a way that's totally compelling and totally human. It's such a snapshot of where we are right now, and it's not always a pretty picture. It's not entirely without hope, either. (Watch on Netflix) 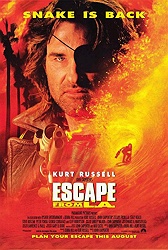 Escape from L.A. (1996, dir. John Carpenter) Yesterday was John Carpenter's birthday, so you can celebrate by watching his newest most underrated movie (this is something I've wondered in the last few years, now that audiences have caught up to both In the Mouth of Madness and Prince of Darkness; Escape from L.A. was always the answer I came up with). For several years, I thought I was one of this movie's few fans. Then Scream Factory announced a Blu-ray and everyone was talking like they've always loved it. Here's what I wrote about the movie when covering Carpenter's career a few years back: Escape from L.A. is like The Texas Chainsaw Massacre Part 2 in that it presents all of the familiar characters and elements but changes the tone to one of absurdist comedy -- a fact that people are still only starting to figure out. That it's as bleak as the original might be confusing, too, as the dark worldview seems to be at odds with the movie's exaggerated humor. Escape from L.A. might be Carpenter's most successful dark comedy since Dark Star, and it's great to see him subverting some of the tropes that he himself established 15 years earlier. (Watch free with ads on Tubi) 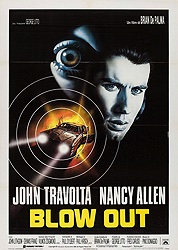 Blow Out (1981, dir. Brian De Palma) The best movie from one of my favorite filmmakers is leaving the Criterion Channel at the end of the month. That should be reason enough for you to watch it, whether you've never seen it or seen in 20 times. John Travolta has never been better (Moose aside, obvi). Nancy Allen has never been better. De Palma's style perfectly complements the paranoid material. This movie is such a masterpiece. (Watch on Criterion) 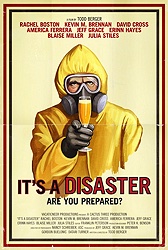 It's a Disaster (2013, dir. Todd Berger) A very funny apocalypse comedy from several years back that plays out the end of the world as an uncomfortable brunch between a group of shallow, often petty friends (among them Julia Stiles, David Cross, Erinn Hayes, and America Ferrera). The dialogue is sharp, the characters mostly ring true, and the final punchline is great. It's one of those movies that plays better now than it did when it was first released, as our politics have made us more fearful and divided and social media more self-obsessed. It's rare that a comedy improves with age. (Watch on Hulu)
Posted by Patrick Bromley at 5:00 AM

Email ThisBlogThis!Share to TwitterShare to FacebookShare to Pinterest
Labels: american factory, blow out, escape from la, i stream you stream, it's a disaster