Listen Up: Movie Picks to Match Your Musical Mood 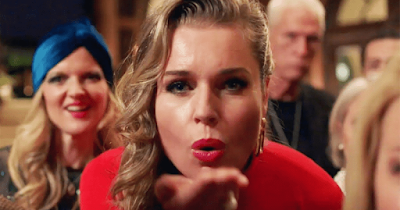 A few weeks ago, everyone on the Internet was posting their “Spotify Wrapped” results—a summary of their listening habits for 2019. As a recovering music store employee/DJ and current voyeuristic weirdo when it comes to other people’s pop culture consumption, I loved seeing what my friends and celebrity crushes listened to this year.

“Enough with the music! This is a movie site!” I can hear you hollering at your screen. Well, I’ve found a loophole that will allow me to talk about both of my obsessions. I present to you a comprehensive list of songs and the movies that you should watch if those songs appeared on your playlists/in your nightmares this year. In some cases, I must admit, the connections are tenuous. But just roll with it, OK? I’m not a doctor. I’m just a girl who loves a good list—and a good reason to recommend movies.

Song: "I Don’t Care" by Ed Sheeran & Justin Bieber
Movie: Booksmart
Key lyric: "At a party we don't wanna be at, tryna talk but we can't hear ourselves."

This song is all about being in uncomfortable, anxiety-inducing social settings. The only thing getting you through is the person you’re there with, and that’s super fitting for Booksmart, a movie in which two high school seniors venture out of their academic shells and party hop all night to varying degrees of awkwardness. See it on Hulu.

Khalid may be singing about a convo with a romantic partner, but his desire for communication and making a plan for the future could apply in other contexts. Such as, for example, a movie-length conversation between Pope Benedict and the man who would become Pope Francis. More interesting than it sounds, I swear. See it on Netflix.

Song: "Heroin" by Badflower
Movie: The Souvenir
Key lyric: "I can't let her go, and my bones are caving in, she stole my faith again."

Ostensibly, Badflower wrote this song about a toxic relationship rather than an illegal substance, but the lyrics could have a double meaning in the context of Joanna Hogg’s movie. A young film student can’t shake a relationship with a guy who seems like trouble from day one, and that trouble only amplifies as time goes on. Watch on Amazon Prime. 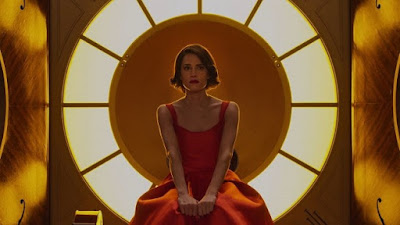 Song: "Sweet But Psycho" by Ava Max
Movie: The Perfection
Key Lyric: "She'll make you curse, but she a blessing; she'll rip your shirt within a second."

I feel like the title says it all on this one, and it matches perfectly with a movie where seemingly sweet women are capable of unexpected bursts of violence and insanity. If you missed this one earlier in the year, catch up with it on Netflix!

Song: "Sucker" by Jonas Brothers
Movie: Always Be My Maybe
Key Lyric: "I'm a sucker for all the subliminal things no one knows about you."

A confection of a pop song about a crush you can’t shake, this is perfect to pair with my favorite romantic comedy of the year, Always Be My Maybe. The couple to be have been friends since childhood, so they know a lot about each other—some might argue too much. But while some of those things could annoy, they also attract… that’s the rom com way! See it on Netflix.

Song: "Harmony Hall" by Vampire Weekend
Movie: Ready or Not
Key Lyric: "Wicked snakes inside a place you thought was dignified; I don't wanna live like this but I don't wanna die."

Vampire Weekend’s song seems to be about hypocrisy in high places… or something. In any case, the line I picked out above coincides with the post-wedding surprise a bride encounters in Ready or Not. Turns out her new in-laws have some weird/cursed traditions involving hunting humans for sport. Catch up with this one via online rental. 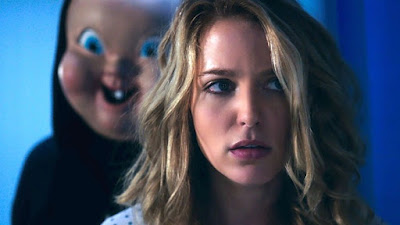 Song: "History Repeats" by Brittany Howard
Movie: Happy Death Day 2U
Key Lyric: "I've already been, I came and went, I washed my hands of it, I don't wanna do it again."

The title of the song tells you a little about the plot of Happy Death Day 2U, a sequel I enjoyed possibly more than the original. As the song says, our heroine has already dealt with living the same day over and over; she’s not happy when she finds herself in this scenario again. But it does produce some memorable and enjoyable results for viewers. Check it out on HBO Go.

I know this is a song about horses, but I still think the spirit of it gets captured in a movie about cars. Christian Bale plays a mechanic/driver who really does ride til he can’t no more, and then some. Super entertaining and worth seeing in the theater, which is where it’s currently playing.

Song: "Dancing With a Stranger" by Sam Smith & Normani
Movie: Transit
Key Lyric: "I don’t want to be alone tonight, can you light the fire?"

Sam Smith and Normani understand that sometimes, our feelings are just too much for one person. And when that’s the case, a stranger’s presence can feel much more intimate than even a close friend or partner’s might. In Transit, a city is filled with people biding their time to leave, and this creates bonds between individuals who might not otherwise connect at all. See it on Amazon Prime.

Song: "Hurry on Home" by Sleater-Kinney
Movie: Portrait of a Lady on Fire
Key Lyric: "Disconnect me from my bones so I can float, so I can roam."

Sleater-Kinney have always known how to write a love song with ferocity and sensuality; this one is their latest. The out of body experience they describe connects well with Celine Sciamma’s gorgeous film about desire and first love. It’s currently in very limited release, but look for it in February when it gets wider distribution. 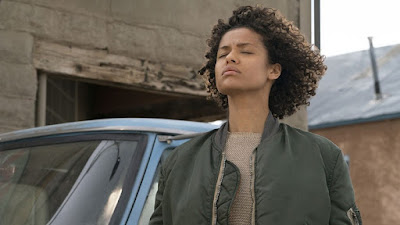 Brendon Urie’s ode to dreaming big strikes a chord with the characters in Fast Color, who inherited special abilities that they’re still learning to use and control. When they realize what they’re capable of, all bets are off. Watch it via Hulu.

Song: "The Greatest" by Lana Del Rey
Movie: Under the Silver Lake
Key Lyric: "Me and my friends, we miss rock and roll… the culture is lit and if this is it, I had a ball."

Lana Del Rey’s woozy California dreaming makes for a perfect accompaniment to the most LA weirdness movie of the year, Under the Silver Lake. I can’t explain it, but maybe you can. Watch it on Prime or Kanopy.

Song: "Patience" by Tame Impala
Movie: Little Woods
Key Lyric: "It's always “drive straight don't be late” ‘cause time waits for no one. I should be flying straight, with no delay, ‘cause time takes from everyone."

A song about deliberation and timing couldn’t be more fitting for Little Woods, in which the main character (Tessa Thompson) has to think fast, drive fast, and be patient for bad circumstances to work themselves out so she can finally get on with her life. See it on Hulu.

Song: "Bad Guy" by Billie Eilish
Movie: Her Smell
Key Lyric: "Don't say thank you or please, I do what I want when I'm wanting to."

Hopefully Billie Eilish will never actually be able to relate to the main character from Her Smell, a rock star whose self-destructive habits have jeopardized her career, relationships, and family. But Elizabeth Moss makes this antagonistic character extremely watchable in one of the best performances of the year. Watch it via online rental.

Song: "Don’t Start Now" by Dua Lipa
Movie: Someone Great
Key Lyric: Though it took some time to survive you, I'm better on the other side.

Dua Lipa understands that sometimes the ones who hurt us the most are the ones we bounce back from better than ever. Someone Great may not be as critically adored a break up movie as Marriage Story, but when it comes to movies about the end of a relationship, I feel like I’ll rewatch this sooner. Plus it’s the movie that catapulted Lizzo into the zeitgeist, and that in itself makes it worth watching. See it on Netflix. 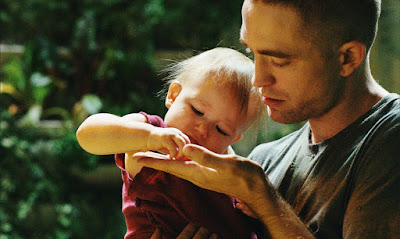 Song: "Light Years" by The National
Movie: High Life
Key Lyric: "It could've been anybody, it was after dark…you could've been right there next to me, and I'd have never known."

This somewhat mysterious song referencing planets and distance seems apropos as an entry point to Claire Denis’ High Life, a space epic with no easy answers and lots of isolation. Both song and movie also find a certain unexpected tenderness amidst an otherwise hopeless time. See this on Prime.

Song: "The Violence" by Asking Alexandria
Movie: Satanic Panic
Key Lyric: "You want the worst that’s inside us? We’ll bring on the violence!"

A song about eviscerating society’s expectations and rising to the occasion puts you in just the right headspace for Chelsea Stardust’s super fun, super bloody Satanic Panic. Suburban Satanists meet their match in a plucky pizza delivery girl, and both sides do bring on the violence. Rentable on various outlets online.

Song: "Love Without Possession" by Mount Eerie
Movie: The Nightingale
Key Lyric: "Awash in multiple griefs, elaborating on anguish, what glows beneath? Love that doesn't die."

Mount Eerie’s song acknowledges loss but still finds a spark of hope. There is incredible, almost unfathomable loss and trauma in Jennifer Kent’s second feature film, but in spite of the grim circumstances, the final note is peaceful and maybe even triumphant. Watch this on Hulu, if you can muster the strength.

This song finds the Radiohead frontman in a contemplative frame of mind, reflecting on the past. That’s also the state in which we encounter Robert De Niro in The Irishman—an aging man taking stock of his life. I’ve probably made Erika cry already so I’ll stop writing this blurb, but just go watch The Irishman on Netflix if you haven’t already done so.
Posted by Patrick Bromley at 12:00 PM