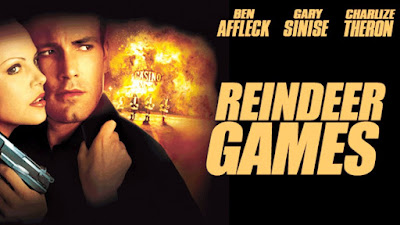 Welcome to 2K Replay, the home of the year 2000 in Film. This week I revisited a special request from Rob for a movie I didn’t remember very well: Reindeer Games.

• Best Scene/Moment: I don’t think Reindeer Games has a best scene, exactly, but the one that I enjoyed the most (50% ironically, 50% as dumb fun) is Clarence Williams III’s death scene because of how awkwardly set up it is. First, Ben Affleck has to get alcohol from Donal Logue, then he has to fill his real gun-looking water gun up with the liquor, then he has to get in a stand-off with CWIII, then CWIII has to realize Affleck’s gun is not real, then CWIII has to light up a cigarette instead of shooting Affleck, then Affleck has to remember that once CWIII flicks the lighter he can shoot alcohol at him from the water gun and set CWIII on fire. You can just feel the screenwriting all over that scene.

• Best Food: “...Some goddamn hot chocolate! And a piece of pecan fucking pie!”

• Best Quote About the Making-Of Reindeer Games: “Ben’s lady Gwyneth flew in to see him all the time on the set. They would be standing in the snow holding hands. People would gasp because it was like the Golden Couple had arrived. Standing there were two Oscar winners. They’re gorgeous, they have lots of money and fame. You almost wanted to bow to them.” - Clarence Williams III on Ben Affleck, his co-star in Reindeer Games (2000), and Gwyneth Paltrow.

• Best Song: The film has mostly Christmas music to fit the setting; my favorite of which is “What Christmas Means to Me” by Stevie Wonder. This song makes me want to get some goddamn hot chocolate.

• Best Merch Available on eBay Right Now: “GFA Reindeer Games - Gabriel *Gary Sinise* Signed 8x10 Photo EJ1 COA” for $48.75. Look how beautiful (and legible!) this autograph is. I love that the listing says, “Free Returns,” like you would ever have the inclination to buy a Gary Sinise autographed 8x10 photo and then have second thoughts. 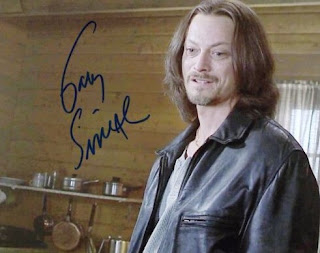 • Director Check: Reindeer Games was the last theatrical feature film by director John Frankenheimer, the man behind The Manchurian Candidate, Birdman of Alcatraz, Black Sunday, Ronin and many other well-regarded films. It’s my movie shame that I’ve seen none of them and have only seen Reindeer Games and The Island of Dr. Moreau (1996) remake of his oeuvre. Frankenheimer passed away in 2002. His trademark “unusual camera angles and blocking techniques” are on full display in Reindeer Games. It’s reported that Frankenheimer didn’t like the theatrical cut of the film (which is the only version I’ve seen) and there’s a 20-minute longer director’s cut of the film that Frankenheimer preferred. To those of you who have seen both versions, is the director’s cut a better movie?

“You white. Then you Ben Affleck” will always be funny. Whatever happened to Bobb’e J. Thompson? That kid was hilarious. (Looks at Wikipedia) Oh good, he’s still working.

• How Did It Rent at Blockbuster? It did okay for a couple of weeks before always being in stock.

• Only in 2000: (tie) Ashton Kutcher cameo meant as a value-add and Donal Logue as the comic relief bad guy. I have nothing against Donal Logue. Just pointing out his character actor run in feature films was around this time. Did you know he was in seven movies in the year 2000?

• Poster Score: 4 out of 5. The one-sheet makes the movie look like it’ll be some fun shit. 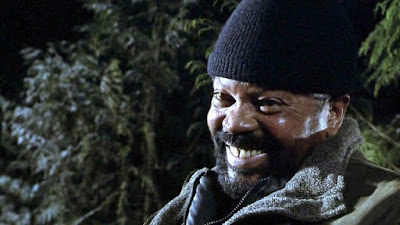 • Scene Stealer: Clarence Williams III is such an inspired choice for an evil henchman. I love how he always modulates from shaky whisper to RANDOM SHOUTING! He also has a great villain laugh. What a delightful character actor.

• I Miss: Dennis Farina. It was such a pleasant surprise to see him show up in Reindeer Games. The shots of him shooting up his own casino with a Quasimodo face (after the bad guys beat him up) made me chuckle. I always liked Farina. He reminded me of Ditka.

• I Don’t Miss: Villain Gary Sinise. It never feels right. I buy him much more as Tom Hanks’ noble friend. Remember how Sinise’s character was named Jimmy Shaker in Ransom? I do. That’s a fantastic movie name. Patrick, when are we gonna do a podcast on Ransom?

• 2000 Crush: Charlize Theron. I would write to her from prison. 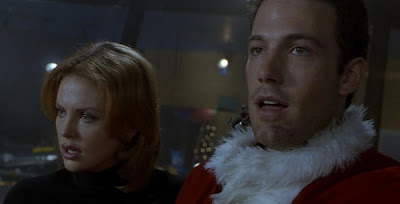 • What I Thought in 2000: Reindeer Games didn’t leave me with much of an impression. I vaguely remember liking the first 30 minutes and then thinking it went downhill after that.

• What I Think in 2020: Reindeer Games is a lot of fun. Either I expected much more from cinema in the year 2000 or it’s gotten worse comparatively.
Posted by Patrick Bromley at 5:00 AM