Where is this terrific film’s fucking Blu-ray release?

Thank you so much. When I was young and studying cinema, there was a saying that I carved deep into my heart, which is “the most personal is the most creative.” That quote was from our great Martin Scorsese so...
(Audience gives a standing ovation to Martin Scorsese)


If the Academy allows, I would like to get a Texas chainsaw, split the Oscar trophy […] and share it with all of you.
(Laughter, applause)

Thank you. I will drink until next morning. Thank you. 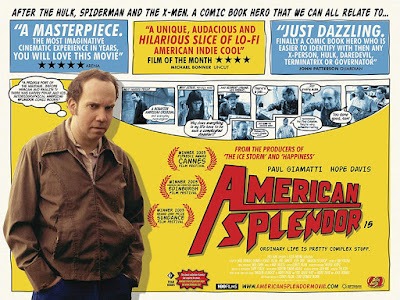 Bong’s joyous, generous Oscar acceptance speech came flooding back to me during a recent re-watch of Sheri Springer-Berman and Robert Pulcini’s extraordinary film American Splendor, based on the eponymous comic book series and the life of its creator, professional curmudgeon Harvey Pekar. By focusing on the mundane and commonplace, the filmmakers arrive at a view of life that is far richer, more thoughtful, and more emotionally true than most Hollywood biopics. This film is a well-observed period piece; a comic joyride; a meditation on aging, loneliness, and death; and a testament to art as a unifying and motivating force in all of our lives. In American Splendor, the personal is not just the most creative, it is the most emotional and truthful.

THE PLOT IN BRIEF: Harvey Pekar (Paul Giamatti) lives the lonely life of a VA Hospital file clerk in Cleveland, Ohio after his second divorce. A longtime fan and collector of comic books, Pekar seizes on the idea of using the comic book form to portray real life, instead of animal antics or superhero adventures. He enlists the aid of friend Robert Crumb (James Urbaniak), a leading figure in the underground comics scene, to illustrate the book, and American Splendor is born. Pekar portrays his own life as an ongoing series of stories, fables, and tales. His job, his hobbies, and his friends and coworkers soon become the subjects of his unique literary voice. Pekar remains a lonely everyman. 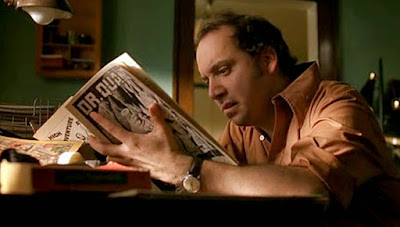 A series of appearances on Late Night with David Letterman catapult Pekar to national fame, though he never makes enough money from the comic book to quit his day job. Then two events transpire to shake up his life and inform his art: Pekar marries Joyce Brabner (Hope Davis), who he meets through her interest in his comic; not long after, Pekar is diagnosed with cancer and turns that hellish, year-long medical adventure into the acclaimed graphic novel Our Cancer Year, which he co-writes with Brabner and which wins many awards. Pekar and Brabner adopt a friend’s daughter, Danielle. Pekar retires from the VA hospital. Pekar hopes for a few years of good health for his retirement.

The film is a marvel of narrative structure, mixing different iterations of the fictional Harvey Pekar with documentary footage of the real Harvey Pekar and animated renditions of the Harvey Pekar from his comics. The 2003 film won “Movie of the Year” at the American Film Institute Awards, the Grand Jury Prize at the Sundance Film Festival, the “Un Certain Regard” Award at the Cannes Film Festival, “Best Film” and “Best Screenplay” from the Los Angeles Film Critics Association and the National Society of Film Critics, and “Best Screenplay” from the Writers Guild of America, the Village Voice, the Seattle Film Critics Awards, the San Diego Film Critics Society, and the Boston Society of Film Critics. The film was nominated for “Best Screenplay” at the Oscars, but lost to Lord of the Rings: The Return of the King. 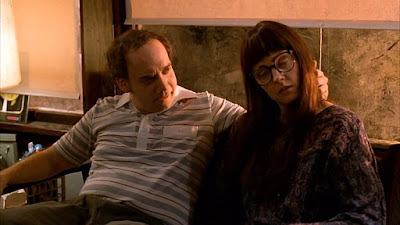 AN ANNOYING AUTOBIOGRAPHICAL PAUSE – Back in my days as a public high-school teacher, I coached a competitive speech event called Group Interpretation.

Group Interpretation is just that: the group interpretation of literature. Imagine twelve people telling you a story, sometimes speaking in unison like a Greek Chorus and sometimes speaking individually and playing parts in the story. One year, I assembled a thematic script called The Phone Book that eulogized that thick closet-dweller, which the internet was about to permanently retire. I used facts and statistics, real yellow pages ads, and monologues from Bob Newhart, Dr. Strangelove, and American Splendor. And who directed that ambitious failure with me? Why, our very own Patrick Bromley. The Harvey Pekar monologue in that piece was lifted from the comic—it also appears as a short scene in the film. It goes like this:


HARVEY
“My name is Harvey Pekar. That's an unusual name, Harvey Pekar. 1960 was the year I got my first apartment and my first phone book. Now imagine my surprise when I looked up my name and saw that in addition to me, another Harvey Pekar was listed.


Then one day, a person I work with expressed her sympathy to me concerning what she thought was the death of my father, and she pointed out an obituary notice in the newspaper for a man named Harvey Pekar. And one of his sons was named Harvey. These were the other Harvey Pekars. Then six months later, Harvey Pekar Junior died. Although I'd met neither man, I was filled with sadness. “What were they like?”


I thought. It seemed our lives had been linked in some indefinable way.


But the story does not end there, for two years later, another Harvey Pekar appeared in the phone book. Who are these people? Where do they come from? What do they do? What's in a name? Who is Harvey Pekar?” 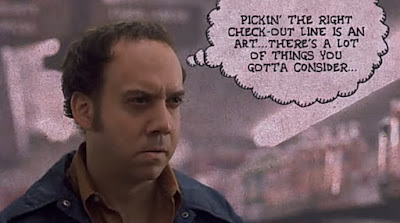 The performances in the film are uncanny. Giamatti, Davis, and Judah Friedlander portray Pekar, Brabner, and their friend Toby Radloff with an eerie verisimilitude, but these are not comic impressions—they are living, breathing embodiments of these very specific characters. The real Pekar, Brabner, and Radloff also appear in the documentary footage, and animated re-creations from the American Splendor comic book often share the scene with both the actors and their real-life counterparts. It’s a delicate juggling act of fact, re-creation, and artful fiction. It’s a complicated marvel.

For me, the film’s most affecting scenes come at the end. Pekar walks his newy-adopted daughter to her bus stop in the morning. His daughter asks him if he always has to hold her hand. Pekar asks her if she is embarrassed by him, the way he was always embarrassed by his father. “No,” Danielle says, “It’s just that you always hold my hand too tight.” That scene always wrecks me. A little later, Pekar sits on municipal bleachers and eats pizza as he watches his wife and daughter ice skate in a city park. They smile and wave up at him as John Coltrane’s version of “My Favorite Things” plays on the film’s soundtrack. The directors take their time with this scene and its length allows us to contemplate just how far Harvey Pekar has come from where he was at the start of the movie. “Real life can be complicated stuff,” as Harvey keeps reminding us. 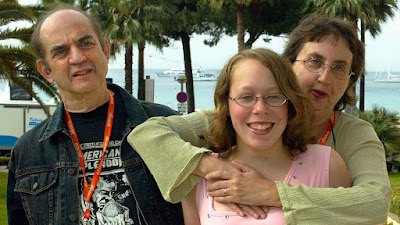 This beautiful, sad film says so much about loneliness, a subject about which contemporary Hollywood has little or nothing to say. The film shows us the corrosive effects of the repetitive and the mundane on the human psyche. Without ever preaching or feeling holier-than-thou, this film also has a lot to say about poverty—not picturesque “movie poverty,” but the soul-crushing effect of real poverty that is experienced by real people every day. American Splendor also demonstrates that media companies like movie studios and television networks are quite adept at exploiting a common man’s loneliness and poverty by turning it into entertainment for the masses, who are only slightly less sad and slightly less poor. The film shows us how art can be used to mediate between a life of promise and a life of despair, a theme in which I am sure most readers here at F This Movie! are interested. And the film never loses its sharp sense of humor. I did mention that it’s a comedy, didn’t I?

ANOTHER ANNOYING AUTOBIOGRAPHICAL PAUSE – A popular road trip when my son was but a lad was driving east from Chicago to Sandusky, Ohio, enjoying the Cedar Point Amusement Park, then pressing on to Cleveland and visiting the Rock and Roll Hall of Fame. The first time we made the trip, my son was a little too young and after a long day at the Rock Hall, cheerfully informed us that he was going back to the hotel to draw a comic book “ABOUT A LITTLE BOY TRAPPED IN A GLASS PYRAMID.” The second time we made this trip in 2006, my son was older, took a friend along for the trip, and appreciated the Rock and Roll Hall of Fame much more. On that second trip, I was leafing though the Cleveland phone book in our hotel room one night, and I noticed that Harvey Pekar was indeed listed. I thought about phoning him up and inviting the Pekar family to join us for dinner. I never did, though. I talked myself out of it. Harvey Pekar died in 2010.

I wish I had made that phone call.
Posted by Patrick Bromley at 5:00 AM