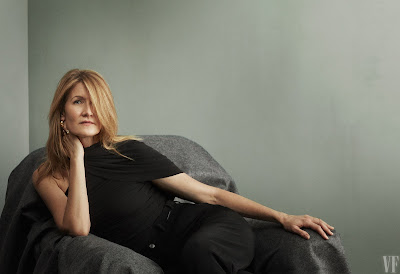 The review duo who’ve seen some Dern but not these.

Adam: To celebrate Laura Dern’s Academy Award nomination (and probable win) at the Oscars this weekend, Rob and I caught up with two of our unseen Laura Dern movies. I wanted to watch Smooth Talk, which was unavailable for rental, so I went with 2001’s dentist noir comedy Novocaine, starring Steve Martin, Helena Bonham Carter, Laura Dern, Elias Koteas, and Scott Caan. I wanted to see this when it was released in 2001, but it never played near my campus. Then I forgot about it. This is probably the correct reaction to Novocaine after seeing it. It’s interesting while it’s on, but not particularly memorable. The movie plays like a Showtime original movie from the mid-’90s. Steve Martin is a solid lead for a noirish crime comedy (and he almost drags the movie to success) but the film’s missing a certain sure-handedness that someone like Harold Ramis could have brought to the material. Rob, what did you think of Novocaine and Laura Dern’s performance? Also, what was with that Kevin Bacon cameo?

Rob: This is such a weird one. More than anything else, Novocaine feels like a film made by a producer who saw Pulp Fiction, read a pamphlet called “How To Make A Film Noir,” and called in favors from his famous friends to help him ride the wave. It’s pretty clear that writer/director David Atkins was in love with a few specific stylistic choices — The grimy x-ray stuff stands out — but didn’t know how to adapt them to the sensibilities of his actors. Everyone feels trapped, and no one element of the film really translates to another in any organic way. Maybe the script read well? I’m not sure. Atkins just doesn’t seem to have a feel for directing, which might be why this remains his sole feature credit. 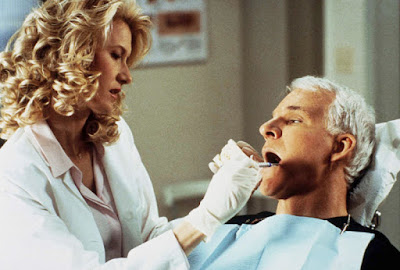 I actually didn’t like Steve Martin in the noir role, at least not in this particular one. He’s stodgy and dry, trading his usual comedic rhythms for an attempt at something like Bogart Cool, but it comes out like Bored Harrison Ford. Laura Dern doesn’t have a whole lot to do until the last act, but she has a few fun moments along the way. Her Jean is a bit like if her Blue Velvet character grew up to be a dental hygienist who took judo lessons. Honestly, the movie is full of talented people who aren’t ever given a chance to let anything breathe or evolve into comedy. Helena Bonham Carter comes out best, maybe? She’s able to get a little looser in the Dark Lady role. That’s the most I can really say about Novocaine.

Adam: The x-ray motif creeped me out. I’m not sure why seeing skeletons chew is scary to me, but I found it unsettling nevertheless. My biggest takeaway about Novocaine is that it’s an opportunity to see Dern play against type and having fun. The movie itself is a fine time-waster.

Rob: Next up in our double feature is Ladies and Gentlemen, the Fabulous Stains, Lou Adler’s notorious midnight movie classic. It stars Dern, Diane Lane, and Marin Kanter as a trio of disaffected youths who form a band, land a supporting gig with Billy’s (Ray Winstone) The Looters, and start a feminist revolution. Or do they? As The Stains gain more traction, their punk rock ethos (“Don’t Put Out!”) start to clash with their dreams of fame and fortune, forcing them to confront the realities of not only their political ideologies, but those of women and young people everywhere.

Adam, what did you think of Ladies and Gentlemen, The Fabulous Stains?

Adam: I wanted to like it more than I did. The entire movie I felt this struggle where I wanted to give myself over to its punk rockness and it never happened. Diane Lane is a magnetic lead (like her performance in Streets of Fire, to which Stains feels like a warm-up), so I was invested mostly because I’m a fan of hers. I had the disadvantage that Ray Winstone is one of my least favorite actors ever and (even at a young age) he’s still Full Winstone. This is one of those movies where an actor allergy pretty much torpedoed the film for me. I was surprised how little Laura Dern is in this (apparently, she made this movie when she was 15, except for the epilogue which was shot a couple of years later). Also, what’s your take on punk music? I know this is me sounding old/square, but it doesn’t connect with me much at all. I’m more of a pop-punk guy. That aside, I did like when the movie presented how fickle punk music can be, where one song elevates an artist into an icon and how fast people want to dismantle the pedestal they put that artist on because...that’s punk.

Did you like the movie? Also, since we’re talking Laura Dern, what about her as an actor do you like most? 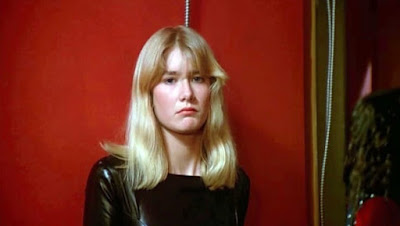 Rob: For as much as I liked Stains, I don’t really think it’s the kind of movie you watch alone. I’d love to see it paired with Streets of Fire in a packed theater at midnight. I’m also a little conflicted about the film’s messaging because apparently screenwriters Nancy Dowd and Caroline Coon walked off the set after clashing with Adler over the ending, which (from what I read) seemed to fit more thematically with the rest of the movie than the weird “We sold out anyway!” music video that closes the final release. It’s an amazing showcase for Diane Lane, but I think it’s an artifact we can appreciate as a series of cool moments (and Halloween costume ideas) rather than a really cohesive story. I still liked it a lot!

I grew up mostly on pop-punk music, but I listened to a lot of older-school ‘70s punk as homework. There’s stuff I connect with (The Damned stand out), but I mostly think punk is about a time in your life when you’ve amassed enough tools to understand the world but not enough agency to do anything about it. I think Stains approaches that frustration the right way, specifically with the aging metalhead and Billy’s issues with illiteracy.

Alright, Laura Dern. It probably wasn’t until college that I knew her as anyone other than the girl from Jurassic Park, but the thing that impresses me most is that, even with that one role deeply embedded in my head, I can still watch a movie and forget it’s her. Comparing Inland Empire or Marriage Story with something like Novocaine, for example, reminds me of her versatility. She always buys in, and she’s incredibly good at sharing moments with other actors rather than trying to take them over. I’m a huge fan.

Adam: I agree. She can find a way to fit perfectly in almost every movie. There’s no limit to her talent, imho. Next week we’ll be back with a new All Pacino review of director Andrew Niccol’s Sim0ne. Until next time…