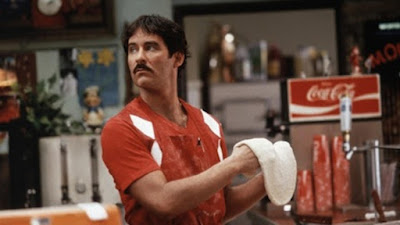 If I asked you to name a 1990 movie that made you crave pizza, you’d probably say Teenage Mutant Ninja Turtles. And you wouldn’t be wrong, but there’s another one that always gets my mouth watering for the Turtles’ favorite food: I Love You To Death, directed by Lawrence Kasdan. The title is accurate, because I do love this movie to death. In case you haven’t seen it in a while (or ever), I’m here to tell you why it deserves your love.

Let’s start with the cast. You’ve got Kevin Kline in the lead alongside Tracey Ullman, playing married couple Joey and Rosalie. Also along for the ride are River Phoenix, Joan Plowright, William Hurt, Keanu Reeves, and (briefly) Heather Graham and Phoebe Cates. Basically a murderer’s row (you’ll see what I did there later) of talented and charismatic thespians, all at the height of their powers.

Next, let’s talk about the story—which by the way, really happened. Even the details you’re going to think are made up for comedic effect. Joey (Kline) has a wife (Ullman), kids, a very successful pizza parlor, and a bad habit of cheating on his wife with five or more women a week, “give or take one or two.” His wife Rosalie acknowledges her husband has an eye for the ladies, but even though her mother (Joan Plowright) and young employee Devo (Phoenix) warn her he’s up to no good, she doesn’t believe them. When she discovers the truth for herself, she decides the only option is to kill him. 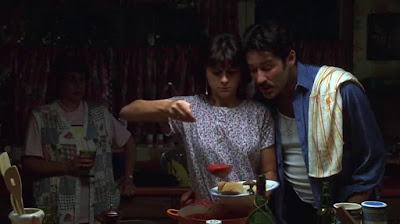 That’s when the hilarity begins in earnest—it seems this guy has more lives than a villain in a slasher movie. Multiple attempts are made, with varying degrees of success, but nothing goes quite according to plan. Part of the problem is that Rosalie still loves her husband, so she objects to some of the more obvious ways to dispatch him into the next world. At one point, she tells her mom, “I want to kill him… but in a nice way.” Later, after another botched outcome, she enlists someone else for help and says, “I want you to kill Joey, but I don’t want you to hurt him.” So you know, mixed messages.

Unquestionably, the highlight of the entire movie (aside from Kline’s Italian accent) is the section featuring William Hurt and Keanu Reeves as stoner cousins who show up to help finish the job on Joey. In the movie their names are Harlon and Marlon; in real life the dudes were called Donald and Ronald. William Hurt sports long blonde hair and sunglasses with lenses you can flip up and down. Keanu has a nose ring, a pot leaf neck tattoo, and a bad goatee. When he sees the headline of a tabloid about a woman giving birth to a kangaroo, he asks in total seriousness, “Is that legal? You know, for humans and kangaroos to have sex?” It’s just the best. 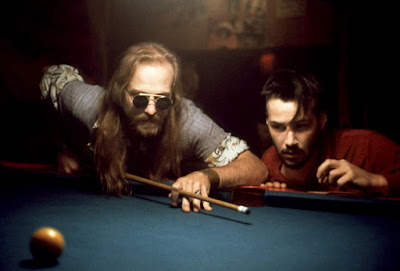 I haven’t even talked about the music in the movie, which strangely includes a lot of instrumental pieces that wouldn’t feel out of place on the Lazy River at a waterpark—very “reggae but for grocery stores” vibes. It’s odd but also part of the movie’s charm, I guess? This movie also has a dance scene set to Hall and Oates’ “You Make My Dreams,” which is one of my all-time favorite songs so it wins lots of points for that. 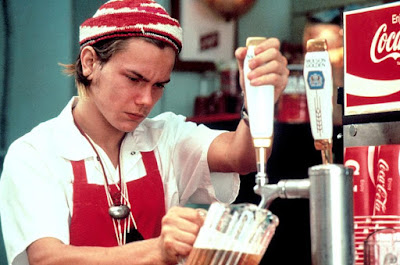 If you’re one of those people who need characters to make logical, defensible choices… well, this movie may frustrate you. As much as I adore Rosalie (I mean, we share a name after all), I will never understand why she didn’t just divorce her husband and find someone who would treat her with the love and respect she deserved. The movie (and the real life person) seem to argue that love makes you do crazy things, and trying to kill your cheating spouse in multiple ways is just one more way of showing that love. I don’t exactly agree. I’m gonna go with the boring, traditional version of love that does not involve attempted murder or years of flagrant adultery. My version of love is sharing a meal—maybe even a pizza—with the man I love, and watching a movie together—maybe even this one.

I Love You To Death is available to rent on Amazon, Vudu, and iTunes.
Posted by Patrick Bromley at 12:00 PM