Celluloid Ramblings: PUMP UP THE VOLUME

I haven’t seen this teen rebellion opus in decades. Will it hold up? Or will the dreaded “Goonies Derivation” hold sway?

For years, if not decades, I used to opine to anyone who would listen (and to any number of people who refused) that very few Hollywood films get high school “right.” I considered myself an expert, of course, because I taught in a public high school, fought the good fight, lived by the bell and died by the bell, for more than thirty years.

Most Hollywood films present high school as a nightmarish hellscape or an impossibly idealized pastel playground of nostalgia. No, Virginia, high school was never like the Rydell High shown in Grease, or the North Shore High of Mean Girls, or the Kennedy High portrayed in Class of 1999 (thank God). Dead Poets Society? Uh, no way. Mr. Holland’s Opus? Nope. Rebel Without A Cause? Think again. I wracked my movie-loving brain and could only come up with three films that portrayed this treasured American institution realistically; Pump Up the Volume, Permanent Record, and Teachers. That’s it. One hundred and twenty-three years of American cinema. Three films. 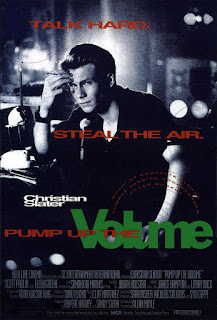 Happy Harry is actually underachiever Mark Hunter (Christian Slater) a thoughtful teen who cannot stand the stultifying suburban life his parents have chosen over their former home in a bustling city. Nora Diniro (Samantha Mathis), a manic pixie dream girl if there ever was one, figures out that Mark is really Happy Harry. She pursues Mark romantically and encourages him to keep broadcasting. The radio show is Mark’s escape and gives him a chance to vent. Mark’s father works for the local school district; Mark starts to broadcast some of his school’s dirty little secrets. The FCC is called in to shut Happy Harry down. Will the voice of teenage America be forever silenced? 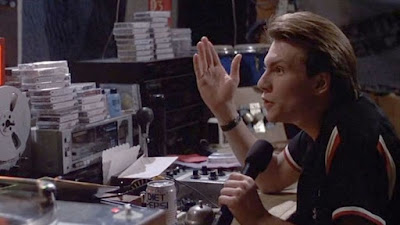 ANNOYING AUTOBIOGRAPHCAL PAUSE: To show you how dumb I am, it wasn’t until just recently that I figured out that “Happy Harry Hard-On” was a play on the initials for “Hubert Humphrey High.” Duh. “HHH” iconography pervades the film; it also seems like every square inch of available space in the high school is covered with empty-headed motivational shorthand. Posters and fliers exhort students to ACHIEVE, EXCEED, TAKE HEED. So ubiquitous is this sloganeering that once you notice it, it’s like the signs and billboards Rowdy Roddy Piper becomes privy to in They Live!

I was thrilled and delighted to find that, upon my recent viewing, the film holds up superbly. Slater and Mathis are excellent. Much of the film resembles a one-act play in the way it concentrates on Slater broadcasting alone in his basement. Harry’s rants are still relevant and profane. It’s still shitty to be a teenager in America. The music is still great. This film treats the problems of being a teenager seriously, specifically in scenes devoted to students who are contemplating suicide and a sad subplot detailing an unfortunate student being sexually bullied by upper classmen. This film deals with these issues honestly and knows that there are no easy solutions. The dialogue is realistic with an ear for how young people really talk. A subplot involving the school expelling low achieving students to boost its average test score ranking also rings true. I encourage all of my readers to see this film, but I doubt they can. 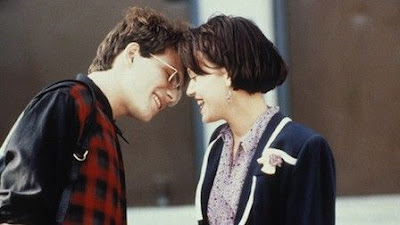 Why is this film only available as an Australian, Region 0 DVD? It is not available to stream legally anywhere. Patrick told me he seriously considered Pump Up The Volume for Saturday’s F This Movie Fest lineup, but had to nix the idea because he doubted everyone participating could get their hands on a copy. Are the music rights holding up a proper disc re-release? Hey, Criterion! Get on it!

Ensconced for most of my life in a “Beatles Bubble” that will allow little other music to penetrate, I think this may have been the film that introduced me to Leonard Cohen (who remains one of my favorite singer/songwriters), Liquid Jesus, The Pixies, Beastie Boys, The Descendants, and Was (Not Was). I still wonder if this film was greenlit because the studio cynically assumed it could make a profit on the killer soundtrack album if the movie was a bust. Happy Harry uses Cohen’s “Everybody Knows” as the opening theme of his radio show and it’s hard to imagine a song more appropriate for conveying that moment in a teen’s life when the world’s cynical truths are revealed:

FILM TRIVIA: What do Pump Up The Volume and Dr. Strangelove have in common?

The brilliant Pablo Ferro designed the distinctive opening credits for both. He also designed the opening credits for Bullitt; The Russians Are Coming, The Russians are Coming; Philadelphia; Beetlejuice; Stop Making Sense; The Addams Family; and over 100 other movies. He cut the trailers for A Clockwork Orange, Jesus Christ Superstar, and Zardoz. He played Chief Cloud In The Head in the cult movie, Greaser’s Palace. 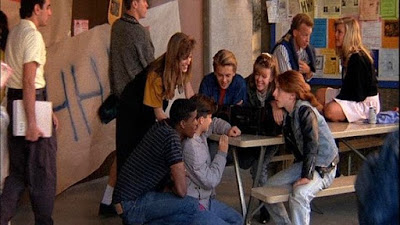 I loved Pump Up the Volume when it was first released, and I still love it. My most recent screening was like a cozy night with an old friend in some dimly-lit pub, featuring a retro DJ spinning sides from the early nineties. I was happy that the dreaded “Goonies Derivation” never raised its ugly head. I was happy that my affection for the film was not simply nostalgia for the days when I was still vibrant, was still in possession of my faculties, and could still appreciate the musical masterpiece that is “Wave of Mutilation” in its “UK Surf Mix.”
Posted by Patrick Bromley at 5:00 AM