Movies I Love: THE ADVENTURES OF FORD FAIRLANE 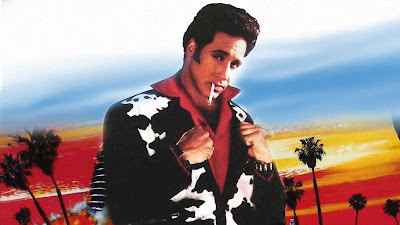 I could've been a rock star, if only I wasn't banned by MTV.

I'm not a fan of Andrew Dice Clay as a standup, but I have always really liked Andrew Dice Clay as an actor. 1990's The Adventures of Ford Fairlane makes that distinction difficult, as Dice is basically playing his stage persona as the title character and a bunch of his standup routine is worked into the script. That's the bad news. The good news is that The Adventures of Ford Fairlane is what pop culture critic Nathan Rabin used to refer in his My Year of Flops to as a "secret success" -- a slick, smart, subversive action comedy that simultaneously celebrates and skewers MTV culture. It's a movie I love as much today as I did when I convinced a friend's dad to take us to see it when we were kids back in 1990. 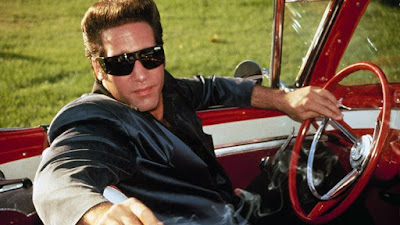 Dice plays Ford Fairlane, rock and roll detective, a Los Angeles P.I. hired to investigate cases in the music industry. He's working low-rent cases and unfortunately can't catch a real break, getting paid in gold bracelets, hair extensions, and koala bears (courtesy of INXS). When shock jock Johnny Crunch wants to find his missing daughter Zuzu Petals (Maddie Corman), Ford and his trusty assistant Jazz (a pre-fame Lauren Holly) are hired to take to the case. It leads to a much larger conspiracy -- one that affects the entire music industry and could cost Ford and Jazz their lives. 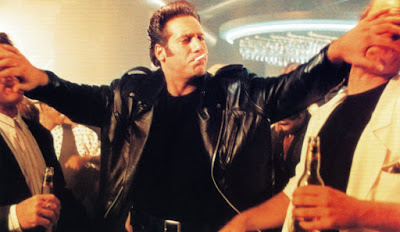 The movie's secret weapon is screenwriter Daniel Waters, the subversive scribe responsible for the likes of Heathers, Hudson Hawk, Demolition Man, and Batman Returns, none of which could be described as typical Hollywood studio fare. Waters (and writers David Arnott and James Cappe) is clearly having fun reworking the tropes of film noir for the MTV set. Some of the classics are there: the voiceover narration, the movie being told in flashback from Ford's lowest point. But Waters is also quick to break the fourth wall practically from the outset and keeps the metacommentary going until the film's very funny final line. The film isn't so much deconstructing detective movie tropes as it is updating them, but the self-aware sense of humor that runs throughout keeps Ford Fairlane's head from getting too big. It never stops being a movie about being a movie; in the span of a single scene, it references James Cagney's The Public Enemy, Saturday Night Fever, and Rebel Without a Cause.

A number of the jokes don't work in 2020. They didn't really work for a liberal-minded kid in 1990, either; they're misogynist and homophobic and altogether ignorant, red meat thrown to the fans of Dice's stand-up at the time. It's why I've never been a fan of Clay's comedy. Ford Fairlane is quite literally a product of its time -- a film that exists almost entirely as a vehicle for its star. As such, it winds up stuck in 1990, too. The film is produced by Joel Silver, directed by Renny Harlin, and shot by Oliver Wood, so of course it has a slickness perfectly in keeping with 1990 MTV. There are also a bunch of supporting turns and cameos from musicians like Morris Day, Motley Crue's Vince Neil, Tone Loc, and Sheila E. Married With Children's Ed O'Neil plays Ford's adversary on the police force. Robert Englund is the heavy. Gilbert Gottfried is DJ Johnny Crunch. I don't know how well it works for an audience in 2020 who didn't see it back when these cultural touchstones made some kind of sense, but the film noir and detective movie tropes help give it a kind of cinematic timelessness -- we recognize the music, even when not all of the words make sense. At least there aren't any dirty limericks to be found. 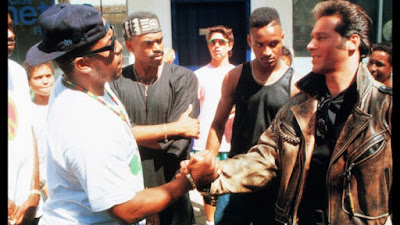 This was one of two Renny Harlin released in the summer of 1990. His second, Die Hard 2: Die Harder, enjoyed much greater critical and commercial success. Because of the controversy surrounding Dice, Ford Fairlane had some difficulty finding marketing and its star has claimed it was all but pulled from theaters in its second week. It grossed its budget of $20 million back but failed to recoup P&A costs in America, despite finding some success overseas. It also won multiple Razzies for Worst Picture, Worst Actor, and Worst Screenplay, further proof of just how lazy and stupid the Razzies are. The film has found some cult success in the last three decades, much the same as other movies written by Daniel Waters. He was a writer ahead of his time, and for as much as Ford Fairlane is trapped in 1990, there's something transgressive about some of its comedy and its approach to narrative.

Though his standup career has continued, Dice disappeared into DTV movies and UPN sitcoms in the years following Ford Fairlane. He has flirted with respectability more than once in the last decade: his Showtime series Dice was a well-received riff on Curb Your Enthusiasm, while his dramatic supporting turns in Woody Allen's Blue Jasmine and Bradley Cooper's A Star is Born earned him serious awards talk. For me, The Adventures of Ford Fairlane will always be the best distillation of Dice's abilities as a movie star. Divorced from the dated, hacky jokes, divorced from the persona, he had the goods. 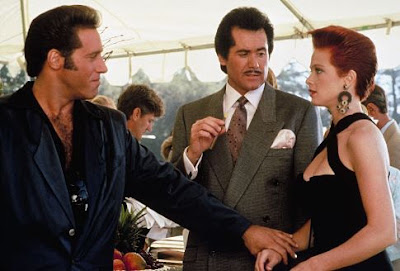 I've always had to defend my affection for Ford Fairlane, both because of Dice's persona and because of its reputation as being a terrible film. It's one of those movies where you have to ask people to look past a lot to find the good stuff, which isn't always easy for audiences to do. But there is a lot of good stuff, and that's what I hold on to every time I revisit the movie. It's not a movie that works in spite of Dice so much as because of him, tired jokes and all. I'd like to think it's a film ripe for rediscovery, but I know in my heart that's not really true. It's too much a product of its time, too much an extension of Dice Clay's stage act. As someone who lived through it in 1990, I can recognize it for what it is: an act. Flaws and all, I will never not love The Adventures of Ford Fairlane.