by Mike Pomaro and Adam Thas 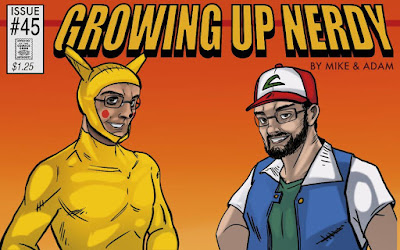 The Nerdy Boys are back!

With F This Movie! celebrating 10 years, I was curious if anything big happened with you over the past 10 years in terms of your “nerdiness”? Love you both, and can’t wait to hear your response.

ADAM: I’ve spent the better part of the last 30 years being a nerd and surrounding myself with nerds of all kinds, so it’s hard to say there is anything in nerd-dom that I have not found myself fully immersed with at some point. Except one. There is one thing that I have consciously and intentionally avoided for my entire adult life: Pokémon. Pokémon came out in April of 1997 and I was well on my way out of high school and into college, so it wasn’t something that registered at all. I was too into starting another phase in my life and reading comics to care about an after school TV show. Then the card game came out. By the summer of 1998, the Pokémon card game was HUGE and Pokémon was impossible to ignore. At the comic book store where I hung out, it was a steady stream of phone calls and visits from soccer moms asking if the store “Had any Pokémon cards.”

I think that’s where a big part of my hatred toward Pokémon started. It was the eye rolls between fellow nerds every time that mom walked up who had clearly never been near a comic book store before. We knew what she was asking about, and then the abrupt walk out the door when we would tell her we were sold out because that shit was harder to find than a Tickle-Me Elmo. Yes, I know it was douchy of us, and we had no logical reason to be so annoyed by Pokémon or these parents who were clearly just trying to do something for their kids, but this was our turf. The comic store was sacred ground. DC was celebrating its 1 millionth comic but half the people coming into the store were obsessed with a Charizard! Besides, Pokémon wasn’t even real anime. Anime was Ghost in the Shell, Akira, and Ninja Scroll, not this elementary school crap. After that summer, the idea of Pokémon nauseated me and I wanted nothing to do with it. Sure I knew who Pikachu was, but I didn’t want to know any more than I had to. Fast forward to 2016 and now I had to watch the herds of nerds walk around catching digital Pokémon with Pokémon Go and it only fueled my misplaced anger toward Pokémon and the fans. 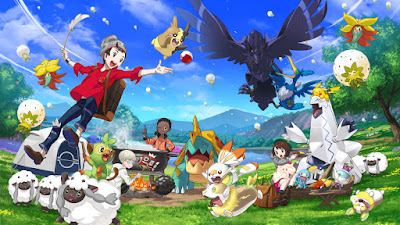 Then I had kids. Things were okay for a while, but the second my son entered kindergarten it was impossible to stop it. Pokémon had found its way into my life. My son introduced it to his sister, and soon it had spread like a strange Japanese fungus. Now, my kids watch Pokémon constantly. They have the cards, the toys, the shirts, everything. It had been forced on me, and having to sit on the couch with my son and watch the absurdity unfold with every episode only intensified my anger. I don’t know who came up with these ideas and names for the 984 different Pokémon (According to Gamerevolution.com) but after watching more than a few dozen episodes with my kids, my hypothesis is that it’s several Japanese individuals who are locked in a room and given nothing but peyote to eat. I can’t even begin to summarize some of the episodes I watched. I hated it.

Now I can’t really pin down an exact moment or day because it started gradually. Maybe it was the first time I laughed during an episode, or the sweet toys my kids brought home, but it infected me. It creeped into my brain like a Ceti Eel and I started to actually enjoy it. I started talking to my son about how a Gyarados evolves from a Magikarp and worrying about Eevee falling into the ocean. Then the card game happened. There is a reason that card game has been around for nearly 25 years; because it fun as hell! I spent $30 on Pokémon cards under the guise that I was buying them for my son. F-heads, I fought it as much as I could but I’m admitting for the first time in this column that I, Adam Thas, am a Pokémon fan. Now, don’t get me wrong, I do have some issues with Pokémon, like how it’s basically an entire show about people catching wild animals and then forcing them to fight each other (Ash Ketchum is Michael Vick in a baseball cap). I still won’t bring myself to put Pokémon Go on my cell phone…… it’s on my wife’s phone. There it is folks, the final gate has been opened, and all my fighting only delayed it. 2010 Adam would be so disappointed in me.

MIKE: It was almost 10 years ago that I found my nerd groove again. My family and I had just moved into a new home and it was Halloween evening. We had no idea what trick-or-treating traffic would be like in this new neighborhood, and we didn’t want to not participate in handing out candy, so my wife took our oldest daughter around the neighborhood while I stayed home to greet any visitors. While normally my Halloween viewing is only Halloween-related material, this year I instead decided to throw on an episode of Doctor Who (episode 1 of series 1 (2005): Rose) while holding a bucket of candy, to see what all the fuss was about. 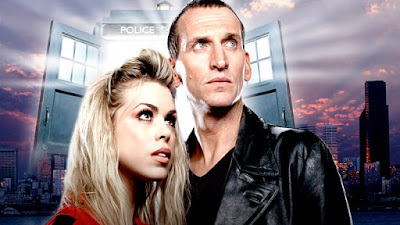 Before this I had fallen out of love with most of the nerdy things in my life with the exception of movies. I no longer collected comic books, didn’t pay much attention to Star Trek or Star Wars, and rarely scoured the internet for nerdy news. I couldn’t tell you why I abandoned most of the things that defined my teen years, but they were absent. Until Doctor Who. It turned out that where we moved to saw very little attention from trick-or-treaters on our block, so I had an uninterrupted viewing of Christopher Eccleston’s take on Doctor Who. Coming into this episode, I knew very little about it, so I had some catching up to do. I have to admit I wasn’t blown away by what I saw, (although it was love at first sight with Billie Piper), but I was interested enough in the mythology to want to learn more. And that was it. The search for more stories and information about Doctor Who history was enough of a spark to bring some life back into my nerdiness. By the time I got to series 2 and David Tennant, I was hooked.

It was shortly after this time that I re-discovered Star Trek and became a fan like never before. I started dabbling in comic books again, discovering the works of Ed Brubaker and Cullen Bunn, and books like The Vision by Tom King and Gabriel Hernandez Walta. Doctor Who helped open the flood gates for me, which ultimately lead to the biggest nerdy thing to enter my life.

Lord knows it’s been well documented here at F This Movie (#yourgrace), but Game of Thrones followed soon after by the book series the show is based on, A Song of Ice and Fire by George R.R. Martin, changed everything for me. My wife, Christy, and I discovered the show between their first and second seasons. We didn’t have HBO at the time, but managed to get our hands on a bootleg copy of season 1 and binged it. Before season 2 started, we made sure we had HBO so we could keep up with it. We re-watched season 1 as a refresher course before season 2 premiered. This would prove to be a recurring thing with Christy and I. Between season 3 and 4 I began to read the books, and that’s when my obsession really began. I LOVE THE BOOKS.

For the first time in my life, I felt like I was truly a part of a fandom. I listened to any and all podcasts I could find on ASoIaF and GoT, of which there are plenty, and became a regular visitor to websites like Watchers on the Wall. I’ve reread the books multiple times and have engaged in theories and predictions with the best of them. It’s by far the most fun I’ve had with a non-movie related topic. And as fun as all of this has been, there’s an even bigger reason for my love of all things Westeros. 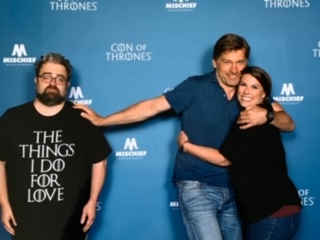 Game of Thrones has been something that I’ve shared with not only family and friends, but specifically with Christy and my mom. Christy has always dipped her toes into nerdy things. She can name all of the crew members of the Enterprise 1701-D and there’s not a bigger fan of the Marvel Cinematic Universe than her, but GoT became a passion for her like myself. Not a let-me-check-reddit-to-see-what-they’re-saying-about-who-will-be-the-third-dragon-rider obsessed, but lets-watch-the-series-again-for-the-sixth-time obsessed. I love sharing that experience with her. As for my mother, it’s special to her and me as well. She’s 84 years old, and on paper not your go-to example of a GoT fan, but the fact of the matter is she loves it and we would excitedly call each other after each new episode aired. I had the privilege of meeting George R.R. Martin years ago and told him that I’m forever grateful to him because it’s not only something I share with my wife, family, and friends, but that my mom and I talk GoT the same way my dad and I talk White Sox baseball. In other words, it means the world to me. Last year we took my mom to ACE Comic Con in Chicago to meet Kit Harrington, her favorite, and he did not disappoint. He’s a lovely guy and my mom has been over-the-moon since.

This brings us to FTM. Over the last ten years I’ve learned a lot about fandoms and online communities. What I discovered is that at their best, fandoms can be terrific, inclusive places, but at their worst they can be toxic. Like I said before, it’s been a blast being a part of the GoT community, but far too often it rears its ugly head. The same can be said about a lot of online communities and it can be deflating.

What separates FTM from so many other websites is that the community is genuinely positive, loving and supportive. We’ve all had highs and lows throughout the last ten years, and consistently the FTM family has rallied to back up one another when we’ve needed it most and that has been inspiring and humbling. We’re truly lucky to not only get to contribute to our favorite website and favorite podcast, but also to be a part of a community that has been a positive light in our lives. As much as we’ve enjoyed talking to strangers in the Star Trek community about who their favorite captain is or A Song of Ice and Fire nerds about R+L=J, it’s the FTM fans we’re most proud to be a member of. We thank you all for an amazing ten years and we can’t wait to do this again in another ten.
Posted by Patrick Bromley at 5:00 AM

Email ThisBlogThis!Share to TwitterShare to FacebookShare to Pinterest
Labels: f this movie 10, game of thrones, growing up nerdy, pokemon