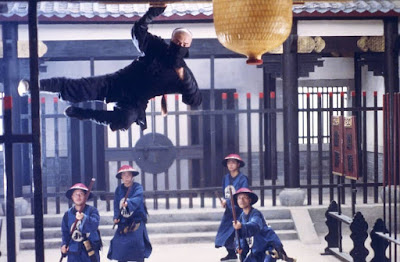 Only one man has the courage to challenge the system and fight back!

The Premise in 30 words, for the 30 days of Junesploitation!

Local vigilante takes from the corrupt to help the poor, upholds the common good. Villains try to catch him, but how can you lose when Donnie Yen is your backup?

WIREWORK + KUNG FU = WIRE FU - Before director Yuen Woo-ping popularized wirework in American action movies for good as fight choreographer on the Matrix movies, he and producer Tsui Hark and pretty much everyone else were taking it to work every day in Hong Kong cinema starting in the 1970s. Nothing is more instantly recognizable in martial arts cinema than actors exploding into the air with jumps and spins; Iron Monkey carries on that tradition here, using wire effect to delineate the true kung fu masters from the mere mortals. Referring to a previously established tradition? That’s a Junesploitation staple. 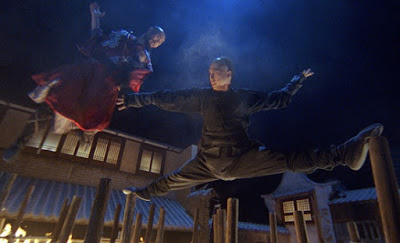 ROGUE-SPLOITATION - So much art commemorates the criminal who upholds the law in the face of corrupt authority: Robin Hood, Batman, Dominic Toretto. The Iron Monkey (Yu Rongguang) fights crime by night, and by day is Dr. Yang, who treats poor patients for free at his clinic by overcharging the rich. Later on, Wong Kei-ying (Donnie Yen) comes to town with his son, the abnormally famous Wong Fei-hung. For those of you keeping score at home, there are at least 200 movies where he appears; he was a real person in history, but his story and life have been so mythologized that it’s hard to tell apart the truth from the fiction. If Bruceploitation became a thing because of the Bruce Lee knockoffs, then Wong Fei-hung has that beat a thousandfold.

IT’S A TEAM UP - Although the movie is probably best known in this country for being a Donnie Yen movie presented by Quentin Tarantino (he’s a producer for the US release), he’s not the title character. When Wong Kei-ying (Yen) is forced to hunt the Iron Monkey in exchange for his son’s freedom, he is injured by the true villain of the movie, the new imperial magistrate Hin-hung, which in turn leads him to Dr. Yang’s clinic and the discovery that the good doctor is the Iron Monkey himself. And then one of my favorite things in movies happens, which is when powerful antagonists find common ground and combine forces to eradicate the true enemy. Which leads to… 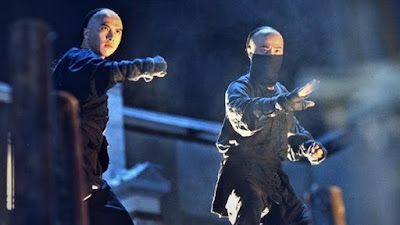 THE CLIMACTIC FIGHT - As per usual, the corrupt governor is too weak-willed to be the real enemy; he is replaced by the Hin-hung, who has been appointed the imperial magistrate after having failed as a Shaolin monk; he wants to cultivate a sect inside of the government of former monks based on the strength of their martial prowess and eventually take power. All of the best elements of this movie, the wire fu, the brisk pace, the inventive use of space, are on display in this last fight. The Iron Monkey and Wong Kei-ying have confronted Hin-hung, and after a melee with weapons, the fight has spilled into a yard with vertical poles for hanging clothes. The ground has been accidentally set ablaze because of spilled wine, which also endangers the integrity of the wooden poles and sets a time limit on how long the fight can last. All of the kung fu ground rules of the movie have been set up for this spectacular pay off. What’s an appropriate challenge for fighters who can leap and balance on buildings? Exactly this.

TSUI HARK - Hark is a filmmaker/producer whose style is best described as a blend of all of his interests and influences, like action, comic books, fantasy, science fiction, and comedy. I would liken him to Luc Besson in this way, but as a compliment. If I were to hazard a guess, given Director Yuen’s predilection for straightforward action, the comedic scenes were probably Hark’s influence. My favorite visual gag is the Iron Monkey leaving notes with a message and a cartoon drawing of himself whenever leaving money or goods for the starving populace. One overzealous recipient tries to run off with the donations for himself, only to get instantly chided with a well-placed stone to the head and another note. 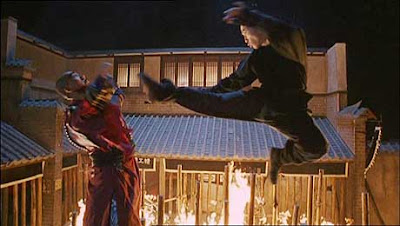 DISGRACED MONKS - The main villain Hin-hung’s army of thugs consists of disgraced Shaolin, who, because of their disgraced stature, can’t remain monks and so become muscle for hire. When they come to attack Dr. Yang at his clinic, they only find his assistant Miss Orchid, and threaten her with leering, rapey jibes. She fends them off, 4 against 1, with her own kung fu prowess, before they overpower her with numbers and attempt to sexually assault her, before a young Wong Fei-hung comes to her assistance. Come on disgraced monks, be disgraceful in less disgusting ways.

IRON MONKEY 2 - in 1996, Donnie Yen starred as the title role in a sequel unrelated to the first one (it makes sense, trust me). Yuen Woo-ping returned as action choreographer but not as director.