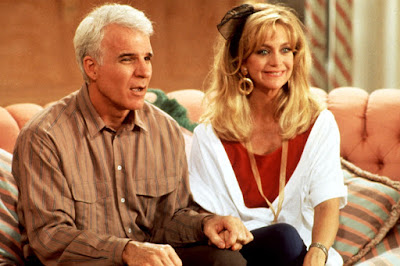 Between Patriot Games and Housesitter, we’re in the gorgeous homes portion of the ‘92 Summer Movie Season.

Adam: Welcome back to Summer ‘92 Redux, our revisit of the Summer 1992 movie season. This week, we’re discussing Frank Oz’s comedy Housesitter, which is a weird movie to dedicate an entire column to in 2020, but here we are. It stars Steve Martin as an architect who builds a dream home for his girlfriend (Dana Delaney), but she turns down his engagement proposal. Down on his luck, Martin has a one-night stand with Gwen (Goldie Hawn) who takes advantage of Martin’s empty property, squatting in the house (which is in his hometown) and ingratiating herself to the locals and Martin’s family by posing as his new wife. Hijinks ensue.

This was my first viewing of Housesitter. I forgot it was even a thing, so I’m glad this series reminded me of its existence and forced me to watch the movie. I like Steve Martin. I like Goldie Hawn. Frank Oz usually makes good movies. Housesitter is fine. There is much to the film I’m not into (I have problems with movies where characters are predominately lying to everyone), but every once in a while - just when I was about to turn against the movie - something funny would happen like Steve Martin calling Goldie Hawn “the Ernest Hemingway of bullshit” or when he tells her she can’t wear one article of clothing after another because she looks too good in them. The movie has a loose, improvised feel which can often read sloppy, but just like most improv comedy there are moments here and there of silliness that come out of nowhere and are enjoyable. If anything, this movie made me want to watch more movies with Goldie Hawn. I have a blind spot to much of her filmography besides this, Overboard, Snatched, and Death Becomes Her (which also came out in the Summer of ‘92). Any recommendations for other good Goldie Hawn movies?

What did you think of Housesitter? Did you have much history with it? 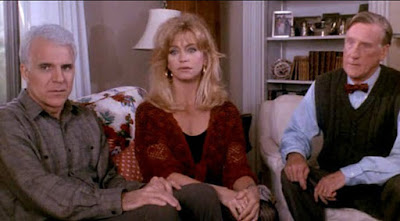 Patrick: I saw Housesitter second-run as a divorce movie back in 1992 and haven’t thought about it since. Revisiting it all these years later, I might as well have never seen it at all. There wasn’t one moment, one line of dialogue, one story beat beyond the basic premise (which I probably remember from the trailer and marketing) that felt familiar to me. I couldn’t believe this was a Frank Oz movie, to tell you the truth, because his comedies are usually a cut above. This one is extraordinarily average. The pitch appears to have been “What if Steve Martin and Goldie Hawn were in a movie together?” Like you, I like both enough to be reasonably entertained by the end result, and I have to admit I kind of miss movies that were just built around stars, but there’s very little to really recommend about Housesitter despite it never being a bad movie.

Adam: I agree with what you said about building movies around stars. The poster is like “Steve Martin and Goldie Hawn. You in or you out?”

Patrick: Almost any movie with Goldie Hawn is worth seeing for her performance, because she’s never, ever bad. A few that come to mind are Cactus Flower, Shampoo, and Private Benjamin. The Sugarland Express is great, too. And Erika will kill me if I don’t mention Bird on a Wire.

Here’s a question I have about the structure of the movie: why do we spend 30 minutes watching Goldie Hawn set up shop in town, laying the groundwork for all the lies that are going to come up later in the movie? Her lying isn’t inherently funny. Steve Martin reacting to her lies and trying to play them off as truth is where the comedy comes from, so why not just pick up the story when he comes to town and finds out she’s been there for weeks? Watching him play catch up -- while at the same time forcing the audience to play catch up -- might have made this a funnier movie. Am I crazy?

Adam: No, you’re not crazy. That’s a good observation. I kept thinking how much the movie fumbles its premise. Theoretically if you were Steve Martin and this happens to you then Goldie Hawn would be a nightmare person, but honestly this is like the best-case scenario of this situation. Goldie Hawn’s character doesn’t seem bad at all except for lying but that weirdly doesn’t land in a negative way to me as presented in Housesitter. Am I crazy?

What do you think of Steve Martin’s ‘90s period? This is the image I always have of him as opposed to his more wild man period in the ‘70s and ‘80s. 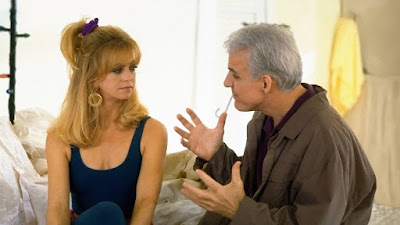 Patrick: You texted me that watching the movie was like being back in improv classes, and I totally get it. There are many scenes of Steve Martin and Goldie Hawn just “yes and-ing” each other, but the lies never really get so outlandish as to become funny. This is one of those movies that has the premise of a comedy, it has the stars of the comedy, it has the structure and beats of a comedy, but there are rarely any real jokes. You mentioned a few that you liked; I have to admit I found it kind of funny when Donald Moffat had to put everything up on a chalkboard because he’s a teacher and that’s just what they do. But I was surprised at just how scant the laughs are in the movie, coming from as many funny and talented people as it does.

I grew up on ‘80s Steve Martin, so that will always be my sweet spot for him. Those early movies he made with Carl Reiner -- The Jerk, Dead Men Don’t Wear Plaid, and (my favorite) The Man With Two Brains are just about as good as comedy gets. I’m a little less interested in the broader appeal of “family guy” Steve Martin, even though I like Parenthood a lot. He lost his essential weirdness, and that’s what made him so funny in his heyday -- and I say this as someone who is mostly unfamiliar with his standup; I only know him from his movie work. Aside from Bowfinger and maybe L.A. Story, both of which he wrote, did he make a really great comedy in the 1990s? I don’t have IMDb in front of me because I’m lazy.

Adam: I don’t know about great, but I do like My Blue Heaven and Father of the Bride quite a bit.

Patrick: Another thing that surprised me about Housesitter: I love Steve Martin and I love Goldie Hawn, but I’m not sure I love them together. There was a lack of chemistry between the two, some of it baked into a plot that requires them to remain apart together, but some of it just the byproduct of two big stars being in one another’s orbit without ever really gelling. It became very, very evident to me when (SPOILERS), at the end of the film, they wind up together and we’re supposed to be happy about it. I wasn’t mad or anything, that’s not what I’m saying, but it was definitely a case of “these two people wind up together because they’re the stars of the movie” and not “these two people appear to have gotten to know and like and care about one another over the course of this farce.” You’ve got to have those moments to sell a romance, even in an admittedly wacky comedy like this one. Right? 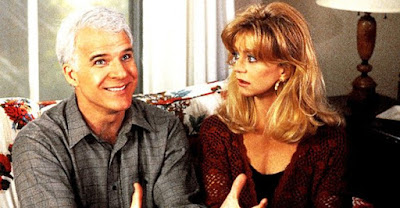 Adam: Yep. It’s weird too because they would go on to team up again later in the ‘90s in The Out-of-Towners. Maybe the second time was the charm? I never saw it despite stocking it sooooo many times during my Blockbuster Video stint.

Patrick: I completely forgot about that Out-of-Towners remake. I never saw it either. I guess it’s like their 50 First Dates?

Adam: We’re back next week with the biggest movie from the Summer of 1992: Batman Returns. There’s a lot to discuss there.

Patrick: Seeing the trailer for Batman Returns before White Men Can’t Jump was the highlight of my life to that point. It’s been downhill ever since.

Adam: And then you saw White Men Can’t Jump, one of my two favorite comedies. That’s a solid outing at the movies. See you next time, everyone.
Posted by Patrick Bromley at 5:00 AM