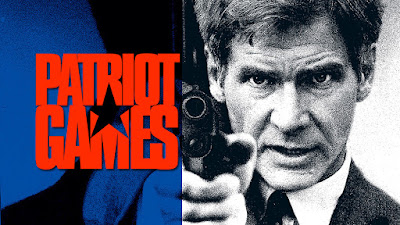 Adam: Welcome back to Summer ‘92 Redux, our revisit of the Summer 1992 movie season. June was a month of surprisingly few new releases (it appears they were clearing the deck to avoid Batman Returns) but started with the thriller Patriot Games, based on a novel by Tom Clancy and directed by Phillip Noyce (Dead Calm). Patriot Games shares a similarity with the early Batman films (starting with Batman Forever) in that it re-cast its lead character - Jack Ryan - who before Harrison Ford took over was played by Alec Baldwin in The Hunt for Red October. The actors took somewhat different approaches to the character, with Ford being more or less Harrison Ford (smart but able to spring into action) and Baldwin more convincing if you envision Jack Ryan as a CIA analyst first and field agent second. In Patriot Games, Jack Ryan and his family become a target of a rogue faction of the I.R.A. (led by Sean Bean) after Ryan saves Bean’s target, a British Royal, and kills Bean’s brother in the process. The movie co-stars Anne Archer, James Earl Jones, Patrick Bergin, Samuel L. Jackson, and Richard Harris.

I’ve been a fan of the Jack Ryan series for a while (they’re “dad blockbusters”), but for whatever reason my experience with them was limited to Clear and Present Danger, The Sum of All Fears, and Jack Ryan: Shadow Recruit until 2020. This year is the first time I saw The Hunt for Red October (which I loved) and Patriot Games (which I may love even more surprisingly enough). After a first watch back in January, this re-watch of the movie cemented what a terrific thriller it is for me. The pacing is great, unlike the more leaden Clear and Present Danger (a movie I do like) and has a suspense and urgency to it that I think the reputation of the Jack Ryan series doesn’t always get credit for. The film also benefits from a great scenery-chewing villain in Sean Bean, who is just as good here if not better than he was later as the bad guy in GoldenEye.

Patrick, are you a fan of this franchise? What did you think of Patriot Games this time around? 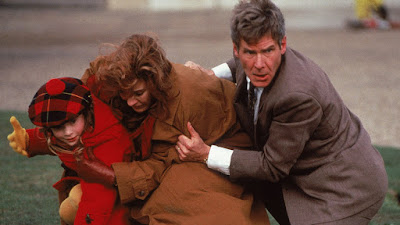 Patrick: This has never been my franchise. I’ve seen every Jack Ryan movie exactly once, and they’re all good movies that I don’t think about -- particularly the first three (Hunt for Red October and the two Harrison Fords). I don’t remember enough about The Sum of All Fears or your beloved Jack Ryan: Shadow Recruit to call them good, but I remember being entertained by both. These are, as you point out, very adult blockbusters, and I appreciate that they exist. They’re the “thinking man’s” action movies before that title somehow went to the Bourne franchise, movies which require very little thought whatsoever.

Adam: I appreciate that Jack Ryan movies show scenes of smart people working out a problem, whereas in the Bourne series it’s the dude popping up on a grid and magic technology takes over in a control room.

Patrick: I didn’t see any of the Jack Ryans theatrically with the exception of Clear and Present Danger, which was a divorce movie that I’m sure we only saw because it was the big new release that week. I remember trying to read Patriot Games once around the time the movie came out but giving up after about 50 pages because it was making me feel very stupid. I’m more Stephen King than Tom Clancy, I guess.

Revisiting the movie now, I found it to be pretty much what I remembered it being: a well-made, well-acted movie that I can admire and appreciate but never lose myself in. I don’t know. Maybe it’s everything going on in the world right now, because it’s admittedly been difficult to lose myself in anything these days. It’s probably not fair to hold that against Patriot Games. I admired the craftsmanship more than anything else. Philip Noyce is obviously a very talented director, and what he does here really carries over what John McTiernan established in the first movie. There’s a lot of this movie that I would swear could have been directed by McTiernan if I didn’t know better.

What do you think of Jack Ryan as a character? Is he enough to carry you through five movies and an Amazon TV show? Do you have a favorite Jack Ryan? I know he’s not exactly James Bond, but it’s interesting that he’s been reinterpreted so many times by different Hollywood leading men.

Adam: Before I answer your questions, I’m appreciative of you saying how difficult it is to lose yourself in a movie right now. I agree with that sentiment completely.

I really like Jack Ryan as a character. The thing that always stood out to me was his morality and collaborative nature. I enjoy seeing him work on these problems with the help of James Earl Jones or Samuel L. Jackson or even Ted Raimi. There’s a moment in Clear and Present Danger where Ted Raimi does something well and I remember Harrison Ford saying “That’s my boy” or something close to it. Those are moments you usually don’t get in movies anymore and I miss them. I’ve seen all of the movies, but I have a TV series allergy nowadays (it keeps me from watching more movies) so John Krasinski wasn’t enough to make an exception. As for my favorite Jack Ryan, it’s probably Harrison Ford, but that’s just because he’s my first Jack Ryan and I think the part fits his Boy Scout image extremely well. Casting Ford makes you feel like he’s always going to make the ethical/moral right decision. Baldwin is really good, though in a different way. I believe he’s the most intelligent Jack Ryan from his performance in The Hunt for Red October. I would need to watch The Sum of All Fears again to remind myself of how good Ben Affleck is in the part. Chris Pine...he’s my boy. Shadow Recruit has Pine, Costner, and Knightley; me asking for more is unnecessary.

Did you know Costner was up for Jack Ryan in The Hunt for Red October but couldn’t do the movie because he was making Dances with Wolves?

Is Anne Archer the most “someone’s wife” actor of all-time? I can’t remember her getting her own shot, but I could be wrong. I’m not looking at IMDB as I write this.

Also, action genre question, are you a fan of movie boat chases? I love the one in Patriot Games. It doesn’t hurt that it ends with an impaling of a bad guy. That was a big move in the early ‘90s…. The Crow, The Hand that Rocks the Cradle, Marked for Death, Mortal Kombat, Ricochet….that shit is final.

Patrick: I like the “boy scout” aspect of Jack Ryan; I just miss the Harrison Ford with a spring in his step in these movies. I get that fighting for his family’s life makes it hard to introduce any levity, but these movies and The Fugitive feel like the start of grouchy Harrison Ford when really it’s probably just “serious” Harrison Ford. What you said about him being a good collaborator is a great observation, though, and makes me like the character more. It also helps explain why this movie has such a deep bench of incredible actors. 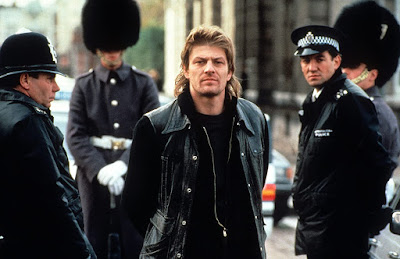 Speaking of which, I forgot that Sean Bean was the main bad guy in this one. In my memory, it was Patrick Bergin, and then I had to remember back to a time when Patrick Bergin was a thing. Sleeping with the Enemy, and that movie with Sean Young where she pees on the floor -- that’s Golden Age Bergin. He had a made-for-TV Robin Hood movie that I totally watched because it beat Robin Hood: Prince of Thieves by a few months and I was so excited for that movie I would watch anything to give me a fix. Uma Thurman was Maid Marian.

Patrick: It makes perfect sense that Kevin Costner would have been up for Jack Ryan. He seems like a perfect fit. He’s basically playing 1920s Jack Ryan in The Untouchables, isn’t he? I’m glad they got him into Shadow Recruit, so he was able to participate in the franchise, and Dances With Wolves ended up working out for him pretty well. No regrets for your boy, I’m sure.

Anne Archer runs the table on “concerned wife” parts, which is an archetype that somehow still makes its way into most movies even in 2020. It blows my mind. I’ve never been able to really form an opinion on her as a result. She’s always just a concerned wife.

I don’t think I’m a big boat chase guy, with the exception of the one in Face/Off. I’m sure there are others I’m forgetting. The one in Patriot Games is especially underwhelming for me because it’s all at night in the rain. That’s some Pacific Rim shit. In my mind, these Clancy movies are supposed to be about intrigue and intelligence, but this is just a straight revenge/protect my family movie (making it fitting that I watched it on “Revenge!” day for #Junesploitation). It’s pulpy material dressed up as serious adult fare. I prefer the pulpy version.

Adam: This movie has a trope I don’t like when the femme fatale tricks a guy into bed to kill him. They always kill the person before anything good happens. They even do a gender reversed version of this in Clear and Present Danger, where Joaquim de Almeida seduces/tricks the Anne Magnuson character. Danger sex in movies is great. Maybe something I should keep to myself.

Speaking of gender, is it just me or is it weird that the movie ends with a baby gender reveal cliffhanger?

Patrick: That really should have played into the sequel: Clear and Present Gender. It reminds me of when 2012 ended with that little girl saying she doesn’t pee her pants anymore. Weird way to end considering what’s come immediately before (see: impaling).

I think The Hunt for Red October is still my favorite of the Jack Ryan movies, but I would need to do a rewatch of all of them to be sure. It sounds like this one’s your favorite? 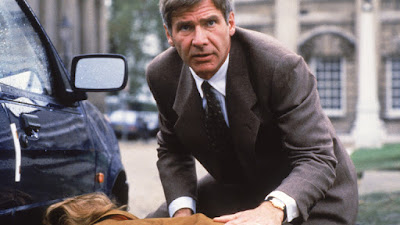 Adam: I can just imagine opening night of Clear and Present Danger and all the Jackheads (?) find out it’s a baby boy and are like “I TOLD YOU!” I need to watch The Hunt for Red October again, but it might be a tie between that and Patriot Games. I really like this franchise.

Also released this week in 1992 was Class Act, starring Kid ‘n Play. I loved it when I was a kid and it held up great on a rewatch this past week. I like it even more than the House Party movies. Plus, it has Pauly Shore playing Stoney again in an extended cameo (“I’m a stoney, crusty dude with a mop on top…”) and a third-act chase through a wax museum! Are you a Class Act fan?

Patrick: It’s been so long since I last saw it, but I remember that I used to watch it whenever it showed up on HBO. I certainly liked it at some point. And Patriot Games missed a real opportunity for a Pauly Shore cameo. Just a few years later and he would have played a hacker for sure.

What’s on for next week?

Adam: You want to see Stoney wheez a little code? Next week is Housesitter, the comedy starring Steve Martin and Goldie Hawn, which was the only new release. See you next time!
Posted by Patrick Bromley at 5:00 AM