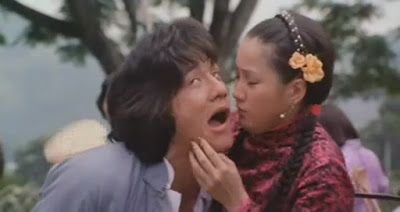 “I’ll break every bone in your body… and send you to hell!”

The Premise in 30 words, for the 30 Days of Junesploitation!

Young arrogant punk refuses to be disciplined, beats up whomever, then gets beat back by a parade of villains. He trains harder, then gets revenge on everyone! But learns nothing.

JACKIE CHAN IS A JACKASS - ...not in real life, just in this movie. Chan is playing the ubiquitous Chinese hero Wong Fei-hung, a real person from the turn of the 20th century whose life has been so mythologized that it’s hard to tell what’s real. Maybe because I’m used to seeing Chan in movies where he’s older and playing the good guy, or maybe because the figure of Wong Fei-hung is consistently depicted as heroic, but I had a hard time when Chan is bullying older authority figures, harassing women, cheating his way out of extra training, beating up cripples, and retaliating against anybody who holds eye contact too long. What took me a minute to figure out was that Wong Fei-hung (who’s hilariously named “Freddie Wong” in the English dubs) isn’t the fully formed hero yet; he’s just a kid still, acting out in the way that overactive kids do. Not that it’s ok for active kids to act out like this, but it makes more sense. It makes even more sense as a performance that fits the bill for Junesploitation; all broad, hammy expressions and brash reactions, because there’s no way an immature kid with this much kung fu talent would walk around thinking he couldn’t take on the world.

DRUNKEN BOXING - If The 36th Chamber of Shaolin had the mother of all training montages, then this movie might have birthed the training montage involving totally unrelated tasks. Jackie Chan is cracking walnuts with his thumbs, he’s filling up barrels of water, and doing wrist pushups. Why? To learn the ancient form of the 8 drunken gods: drunken boxing. He doesn’t even want to actually learn it, but his father forces him to as punishment for his youthful indiscretions from earlier in the story. For those who are unfamiliar, drunken boxing involves staggering, feinting movements that imitate an intoxicated person, with the added bonus that usually one has to actually be drunk to be proficient at it. “The fact that you’re pretending to lose lets you win” says Master So Hai, while Wong Fei-hung complains about his training. I’ve said something similar before, but there is little more exploitation-y than the concept that alcohol can make a person better at a highly complex physical activity like martial arts, or that alcohol makes you better at anything, period. The wine that anyone drinks in the movie takes comically instantaneous effect. It’s wine magic! 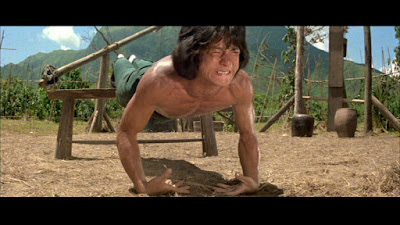 Just to be totally clear, Chan is spectacular at drunken boxing. He not only sells the action with his athleticism and speed but all of the reactions too; nobody takes a punch as well as Jackie Chan. For a long time I thought drunken boxing was a thing that Chan had made up himself, because it’s so perfect for his style of comedic action. Think about it: could you imagine Keanu Reeves, or Jet Li, or FTM favorite Scott Adkins doing drunken boxing? It’s not because of any lack of skill, but it doesn’t fit their style or persona. His penchant for comedy makes him uniquely suited for bringing this style to the screen, and this one is regarded as starting the wave of “drunken” martial arts movies.

AMAZINGLY STUPID (ALSO AWESOME) NAMES - Look, dubbing one language over another always leads to sometimes problematic but consistently hilarious results. The best example is how different cultures translate names; apparently, whoever did the dubbing for Drunken Master decided Anglicizing some names would be helpful to an English speaking audience. So, we get “Freddy Wong” for Wong Fei-hung. That’s not as funny as the names of the various antagonists in what is truly a pantheon-level bad guy name appearance. There are the normal ones like Gorilla, The King of Bamboo, and Thunderleg. All good for a chuckle, but none of those hold any weight compared to the reigning champion of bad guy names: Rat the Iron Headed Bullet.

Rat the Iron Headed Bullet is so named because he uses his shaved head as his main kung fu weapon, because apparently any sort of contact with his iron head means instant pain. He tries to butt and ram, but you can’t punch his head either because it’s too hard. I will always love my guy whose nickname is actually like four nicknames. 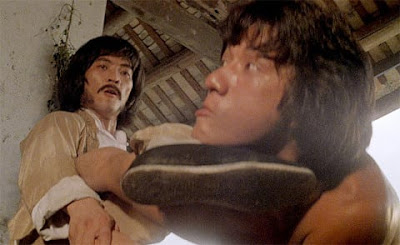 • The Legend of Drunken Master, also known as Drunken Master II, is only a loose sequel to Drunken Master. Jackie Chan reprises his role as Wong Fei-hung, and this time is a slightly more principled man-child.