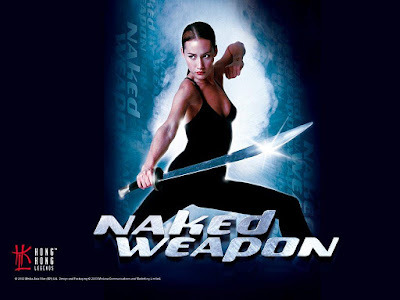 They seduce you, just before they kill you!

The Premise in 30 Words, in honor of 30 days of Junesploitation

Maggie Q is an elaborately trained assassin who uses her skills and her looks to complete missions, but finds love with the help of her mom and a terrible cop.

EXPLOITATION OF EVERY ACTION TROPE POSSIBLE - It’s as if Director Tony Ching was trying to win the World Championship of Exploitation Bingo, in just 90 minutes. It’s obviously got lethal ladies, rape/revenge, and martial arts, but swoops into women in prison, cops, and samples from every entree in the '90s action movie buffet. This is not a criticism, because the movie is having too much fun unapologetically being all of these things. Luc Besson lady assassins? Yes. The Matrix-style wire-slow-mo? Why not. A cold open, straight from Bond? Absolutely. Who’s not having fun? 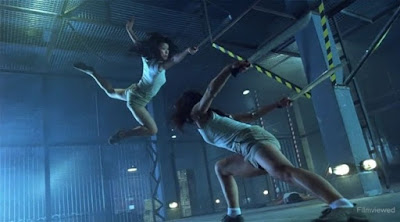 NOT AS NAKED AS EXPECTED? - The movie poster and the trailer would have you think this is one of those titillating Skinemax deals, but it does not match up to those expectations. The sexy-sploitation is all over the map and constantly punctuated by interruptions. There is a girl-girl friendship that seems more than friendship, but that’s cut off by intermittent Battle Royale-style elimination murders with the other prisoners. There is a rape scene (brief, but still not cool, Naked Weapon) that comes out of nowhere. Lady assassins suggestively wiggle at their targets, only to brutally kill them with their bare hands. If you were expecting a Skinemax plot, then sorry that this action movie broke out.

VERTEBRAE KILL - Maggie Q plays Charlene, who along with her friend, Katt (played by Anya Wu), has been kidnapped as children by the mysterious Madam M, who trains athletically gifted girls into assassins. Since the lady assassins usually seduce their targets, they master the art of killing with their bare hands; the signature move is to rip the vertebrae out from its place in the spine of the victim. We see it in the opening sequence, and later on when Charlene is on her first mission. It looks as painful as it sounds. 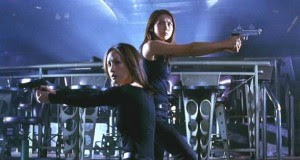 MAGGIE Q, ACTION HERO - Discovered by Jackie Chan as a potential action star, Maggie Q learned from her mentor to always do her own stunts, despite never having done martial arts before her acting career, and never really intending to be an actor in the first place. Although the movie delights in using slow-motion and hyperbolic wirework, she sells all of the hand to hand combat and the weapons, and through the editing and the practical effects, she’s credible as an assassin in this ridiculous, slightly overwrought world.

OUT OF NOWHERE, A ROMANCE - Daniel Wu plays Jack, the cop who’s been on the case of the missing girls and assassinated targets (hard to tell which) for the last several years. In his independent passion for this case, he tracks down Charlene’s mom, figuring that by sticking close to her he’ll be able to find Charlene, and then the assassination ring. Charlene’s next hit ends up injuring her mother, who is an accidental bystander, and leads to a romance that the story heavily invests in, despite the whole movie only being 90 minutes. Charlene escapes from the scene of the crime with Jack in hot pursuit, only for both to be trapped in a freezer truck. Jack gallantly offers his jacket to shivering Charlene, and later on helps her injured mother to a hospital, so obviously he is marriage material, which culminates in a romantic romp on the beach, only for Charlene to go away to complete her final mission before disappearing, both Jack and Charlene pining away for each other. Is the movie hoping that the sequel is about Jack and Charlene getting back together? Has there ever been that drastic of a change from one movie to the next (Alien and Aliens people, please sit down)? 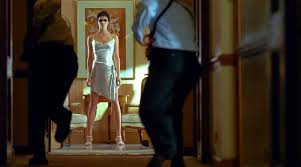 SO MANY QUESTIONS - This is a little of what I wrote while watching, that still seems unanswerable to me.

If the girls are kidnapped at around 12 years old, then how many years do you have to train them before they’re credible adult assassins? How is this profitable?

If there is a prison deathmatch to determine the best fighter, then isn’t that a total waste of training the whole pack of them? HOW IS THIS PROFITABLE?

The henchman who’s training the girls must truly have a passion for working with young people.

FUN FACT - The same producer, Wong Jing, also made movies called Naked Killer and Naked Soldier, with similar lady assassin vibes. Unclear on whether it is more or less naked than this one.